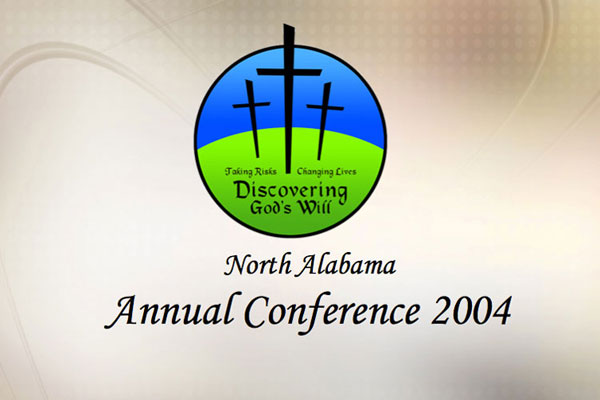 North Alabama United Methodists came together June 6-9 to lift up their hearts, hands and voices in praise and worship and also to carry out conference business as the 135th session of the North Alabama Conference met on the campus of Birmingham Southern College under the theme "Taking Risks. Changing Lives. Discovering God's Will.." Bishop Robert E. Fannin presided over the conference for the 12th and final time before his retirement in August.

On Sunday afternoon, the Conference began as members and visitors joined in singing, "And Are We Yet Alive?" Following the song, Revs Dale and Kelly Clem and Rev. Patrick Friday, all former missionaries to the Baltic region of Eastern Europe, led the congregation in a virtual journey, through stories and video, to the Hill of Crosses, a pilgrimage site in Lithuania. The Hill of Crosses survived the Soviet occupation of Lithuania and their attempt to destroy all symbols of religious faith. Today the Hill of Crosses contains thousands - maybe millions - of crosses all placed by individuals and groups as acts of prayer, witness and faith. As worship continued, conference members then processed to the front of the auditorium carrying crosses that represented the ministries of their congregations. Each cross was placed on the stage and formed a "hill of crosses" to be a visual symbol of the strong and continuing faith of North Alabama United Methodist Churches. The crosses remained in the auditorium throughout the four day meeting as a witness of this living faith.

Special guests for this year's conference included Bible Study leader Bishop Richard Wilke and preachers Rev. Dr. Abena Safiyah Fosua, Director of Invitational Preaching General Board of Discipleship and Dr. Toney Campolo. Each special guest challenged North Alabama United Methodists with the message of being the church of today and serving those outside the church walls. Musical guests for the conference included Shane Barnard and Shane Everett who led a youth worship event on Sunday evening and Dove Award and Grammy winning gospel artists Larnell Harris who presented a high-spirited concert on Tuesday evening.

During business, members heard reports from teams and agencies. Highlights included hearing that the Conference will start two new communities of faith this year; passing the Conference budget of $12,237,583; and recognizing members for their outstanding ministries in various areas such as the Louise Branscomb Barrier Breaker Awards presented to Rev. Tom Duley and Mrs. Betty Likis for their work in breaking down social, economic and racial barriers; an Asbury Award for Higher Education presented to Rev. Penny Ford for her work as a campus minister for nine years, and Denman Awards in Evangelism presented to Rev. Richard Stryker and Jody Hooven. There were two special Denman awards also presented to Dr. Kimberly Hillman and her late husband Jerry Hillman and to Dick Freeman, the Conference Director of Congregational Development. A final recognition in the area of Evangelism was presented to Bishop and Faye Fannin as they were name the North Alabama Conference "Distinguished Evangelists."

Another highlight was that that North Alabama Conference was told of its selection as the mentoring conference for the Judith L. Weidman Racial Ethnic Minority Fellow for 2004-05 by United Methodist Communications. This fellowship was developed to help prepare individuals of racial ethnic minority heritage to be communicators at the Annual Conference level. Jacquelyn Dorice Hall of Montgomery, Ala., was introduced as the 2004-05 REM Fellow.

Churches also reached out to missions during Annual Conference by raising more than $39,000 for the conference mission project to purchase land and build "Camp Wesley" which will serve the children, youth and adults in the Baltic countries of Latvia, Lithuania and Belarus and an additional $3,145 for North Alabama missionaries through the sell of "Threads of Hope" Quilts given by each district.

The Conference also celebrated the commissioning 15 new probationary members and the ordination of 11 new clergy.

In the true spirit of Christian Conferencing, on Tuesday afternoon Conference members and visitors participated in Equipping Seminars in which United Methodist resource persons provided information for local churches in such vital areas as leadership, congregational development, children's and youth ministry, finance and mission. But most of all, throughout the Annual Conference meeting, North Alabama United Methodists truly came together in that same spirit of Christian Conferencing and worshiped. Each worship service had a distinct style and was led by local church musicians and leaders from throughout the North Alabama area. Bible study leader Bishop Wilke told the conference "I've been to a lot of Annual Conferences. I usually hear the financial reports and other reports...but you...you have a revival going on here!"

Suspension of in-person worship services and gatherings extended through April 30, 2020