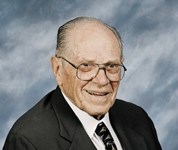 Rev. Lavelle Reynolds, a retired Associate Member, died March 4, 2017, at the age of 102 years old. He was the oldest clergy member of the North Alabama Conference. He is the father of Dr. Hughey Reynolds, senior pastor of Decatur First UMC.

The arrangements are as follows:

Rev. Reynolds became a licensed local pastor in 1957. He was ordained a Deacon in 1968 and became an Associate Member of the North Alabama Conference in 1978. During his ministry he served dozens of churches including Millerville Circuit; Midway Circuit; Roanoke Circuit; Hackneyville Circuit; Hackneyville; Sunny Level and Five Points UMCs. He retired in 1984, but continued to serve churches in retirement until the late 1990s.

Please remember Hughey and family in your prayers.