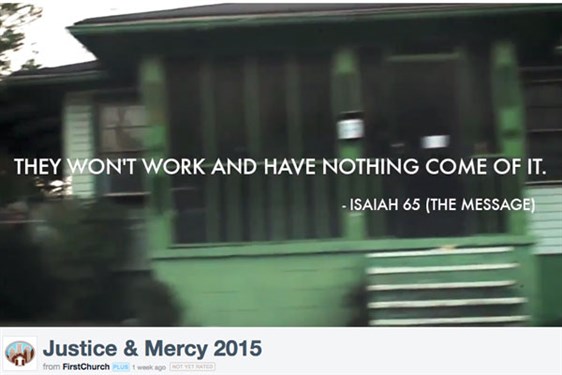 
Each year Birmingham First UMC’s Justice and Mercy Team prayerfully chooses an area on which to focus attention in order to better serve those least empowered in their community.  This year the team has chosen the focus of "Home."

We recognize that having affordable, safe and secure housing is more than just a desire. It is a necessity for persons to have abundant life that God's Kingdom promises. However, there are often crippling circumstances and barriers that put roadblocks between someone and their needed home.  As a church, the Birmingham First congregation desires to engage in better understanding those circumstances and finding a faithful response.

The yearly focus began on Sunday, March 16 with a church-wide lunch where members watched a video produced by the team that introduces the theme of housing. The video features vulnerable and personal stories from within the family of Birmingham First, Church of the Reconciler and Community Church without Walls.

Following the lunch ONE Roof of Alabama led an experiential simulation of moving from homelessness to housing.  Each person who attended was given an opportunity to role-play an actual situation that someone could encounter.  After learning of their role, they were asked to navigate through a system of agencies, requirements and problems to see if they could get good housing, food, and a job.  The simulation taught all involved that this is not an easy task. It helped the congregation better understand some of the dilemmas and emotions persons feel while trying to make it to a place of security.

Following this kickoff event Birmingham First will be engaging with Habitat of Humanity, as well as other advocacy organizations, to become more educated on issues of housing and to serve alongside those fighting to have the opportunity to have a home.