Working Together to Pass a Resolution 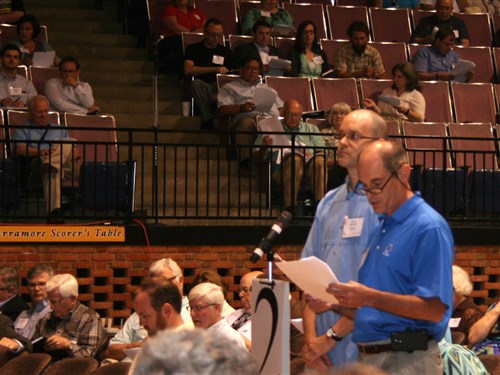 by Dave Barnhart and John Kearns

The resolution that the North Alabama Conference recently passed regarding Harm Reduction for LGBTQ Teens was not a resolution about homosexuality.

It was not a resolution about psychology, or whether or not we should talk in terms of “sexual orientation” or “lifestyle choice.”

It was not about scripture, or how we interpret various passages.

It was not about theology, or how we understand sin, salvation, and God.

It was not about ethics, or how we talk about right and wrong.

How we passed the resolution was a model of how holy conferencing should work. As in the local church, our best work is done before we ever vote on anything. It is difficult to have meaningful discussion from the floor guided by Robert’s Rules of Order.

John Kearns approached Dave Barnhart, the author of the resolution, about finding language that would represent a common ground that those on the left and the right could agree on. Both pastors worked together with an understanding that we are often after the same goals, even if we are not speaking the same language.

In this case, the goal was simple: improve long-term health outcomes for teens and young adults who self-identify as lesbian, gay, bisexual, transgender, or questioning/queer (LGBTQ). Dave was motivated to write by Dr. Caitlyn Ryan’s research, which found that family response—as well as the response of faith communities—had the most impact on LGBTQ teens and young adults' health outcomes. Suicide, depression, drug use, and HIV infection rates were all drastically lower for those whose families maintained relationships and showed love to their children. John was motivated by two things. First, his work with young people in his congregation who struggle with this issue. Second, by a desire to focus the discussion in such a way as to highlight the areas where both conservatives and liberals agree.

Our compromise language choices were not just about semantics. They reflect important nuances in a discussion that often gets reduced to simple sound bites and stereotypes. For example, we removed the word “support” and substituted “show gracious love,” because we did not want people to confuse providing emotional support for a person with supporting what they believe is a lifestyle choice. Churches can support families, and families can support children, without “supporting” what they do not agree with. As the resolution states: we do not have to agree in order to demonstrate love.

A good deal of prayer, thought, and compromise went into crafting the amendments, which we felt represented our priorities as United Methodists.

We fully realize that our disagreements about psychology, scripture, theology and ethics are real, and deep. However, we believe that we can have relationships of Christian love despite these differences. There are too many families who have alienated each other to the point of refusing to gather for holidays, meals, or worship over issues of sexual orientation and gender identity. We believe the church must model an alternative way of relating to each other if we are to help families find a way forward.

Both of us, John and Dave, appreciate our diverse lay and clergy colleagues in the North Alabama Conference, and celebrate the ministry and mission to which God has called all of us.

Working Together to Pass a Resolution