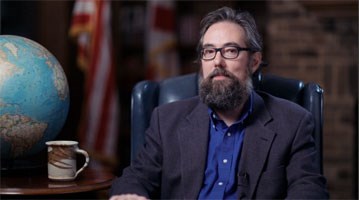 Birmingham-Southern is making its first foray into the growing field of Massive Open Online Courses, or MOOCs, this spring.

BSC Associate Professor of History Dr. Randall Law’s eight-week course, “The History of Terrorism,” will launch May 12. The course is described as “an introduction for people to truly understand the root causes, social context, and methods of terrorism in the 21st century.”

Law is an award-winning teacher and the author of an acclaimed study, Terrorism: A History (Polity, 2009), that puts terrorism into broad historical, political, religious, and social context from ancient Assyria to the post 9/11 War on Terror. He is currently editing the Routledge History of Terrorism, due out in 2015.

The MOOC is free and open to anyone with an Internet connection. BSC alumni, parents, and friends are invited to join in. Three modules will be released to participants each week through CourseSites by Blackboard as a non-credit-bearing offering; each includes an online video lecture, readings, a quiz, and discussion forums. Students enrolled can apply for a certificate of completion for a small fee to potentially meet continuous learning requirements of individuals in homeland security, law enforcement, or other related fields.

Provost Mark Schantz believes that Law’s expertise in terrorism, an ongoing concern worldwide, perfectly illustrates the resources Birmingham-Southern has to offer, but too often goes unrecognized.

“We have faculty at BSC who are doing world-class work, but it’s often possible in this world to have those voices crowded out by institutions that have a higher marquee value,” Schantz said. “One of the things we want to do is showcase the intellectual and academic work being done here in a way that is a reminder to anyone watching, that our faculty have real game and can weigh in on a whole range of topics.”

If all goes according to plan, Schantz believes there will be others that follow, but he admits the MOOC field is still a moving target.

“One thing I have learned over the last 18 months is that the pace of change with MOOCs is at the speed of light right now,” he said. “What people predicted in the past would never happen, is probably already happening, or is likely to in the near future.”

Schantz also believes that this new offering is very much in line with the mission of the college and the liberal arts mentality.

“We’re not just randomly flailing around, scrambling to put something out there just because other people do,” he added. “Using this innovative technology is still very much about the core mission of the school. In the MOOC, the old meets the new. As we jump ahead with this kind of technology, we’re using it to honor a deep and rich tradition of scholarly teaching, and sharing our professors who teach well. That’s the core of the liberal arts and we’re trying to marry those things together.”

To learn more about the course and view a preview with Law, go to www.bsc.edu/mooc. To enroll, go to www.coursesites.com.