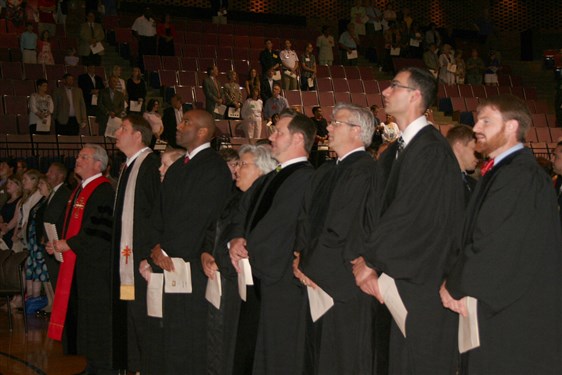 Monday of Annual Conference began with a time of worship. Guest worship leader Cheryl Tolbert led those gathered in song.  Bishop Lindsey Davis preached a message based on the Great Commission.

During the message, Bishop Davis shared the story of how he finally answered God’s call to ordained ministry while a member of St. Mark UMC in Northport.  St. Mark was a newly started church at that time. Bishop Davis shared keys he has learned throughout his ministry about planning new churches.

He added, “ It is crucial to have a gospel strategy before you have a church plant strategy. “

Other keys he mentioned included leadership, context and flexibility / nimbleness . He noted, he knew it may offend some clergy, but said, “Very few clergy coming out of seminary have giftedness, calling or desire to start a new community of faith.  We need laity.  We need to find a way to clear the path for these people to emerge.”

The morning business session opened with the announcement of the results of Ballot #1 of the 2016 General and Jurisdictional Conference Delegate elections.  Steve Lyles was elected in the first lay ballot.

The Conference then adopted the consent calendar and heard from Director of Connectional Ministries Linda Holland who explained proposed changes in the Standing Rules of the Conference.

The New Church Team presented their report. Matt Jones introduced current new church planters. He also reported that the Conference’s new church starts comprise 4% of the worship attendance, 9% of the baptisms, and 12% of the professions of faith in the North Alabama Conference.

Jones then announced other initiatives that not only will help church plants, but also establish congregations and their leaders including a learning lab in Huntsville and Readiness 360.

Rev. Dale Cohen completed the New Church Team report by giving an overview of the desk audit of North Alabama New Congregations since 1991 completed by the General Commission on Religion and Race. He noted the findings of the audit and noted “we need to do a better job” in planting new African-American congregations. He shared three recommendations from the desk audit.

Conference Lay Leader Steve Lyles presented the Laity Address. He recognized the District Lay Leaders.  He encouraged those gathered to nurture their Christian Garden and share the gospel with their community.

Rev. Shane Harris, pastor of Bethlehem Station UMC, was recognized as the clergy recipient. As he accepted the award, he noted that as a social worker, he often was called into homes with unimaginable conditions.  These homes were often within one mile of a church.  When he asked people about the church they would most often tell him they had not had contact with that church and didn’t even know the pastor’s name. He addressed the clergy of the Conference saying,  “God didn’t just call us to preach to Christians. God called us to the byways and highways.”

Bobby Jack Kerley, a member of Alexander City First UMC, was the lay recipient.  He told of his service helping to coach football.  He noted he took that opportunity of working with community youth to share the gospel with them.  He noted he accepted this Denman Award as an encouragement from the Conference to “keep going.”

The Council on Finance presented its reports.  Council President Haig Wright announced the proposed Conference Budget for 2015 of $10,155,717 noting this was an increase of 3.8% with that increase going toward new Conference priorities of new churches, mission churches, higher education and leadership development.

Rev. Kenneth Dunivant offered a resolution that the 2015 budget should not be more than a 10% increase of the actual dollars received in 2013.   Conference Lay Leader Steve Lyles moved to table the resolution until the Council on Finance could present specific information to the Conference. The budget was tabled until Tuesday morning.

Other reports from the Council on Finance were approved.

The Board of Pension and Health Benefits presented their report.  During their presentation, they announced a Health Insurance Special Distribution.  The distribution will be $599 to Eligible Clergy; $599 to eligible clergy spouses; $1500 to eligible local churches for each clergy with individual coverage and $1500 to local church for each pastor with dependent coverage.

Conference Statistician Rev. Amy DeWitte presented the Statistician’s Report. She offered several reasons for the Conference to celebrate including 2,056 professions of faith in 2013, 1936 baptisms, 26,144 people engaged in mission serving 763,255 people. She also noted that the membership of North Alabama is slightly becoming more racially and ethnically diverse,

Micah Dormann, Conference Youth Coordinator, introduced the Battle of the Bands winner. This year’s winner was from Cove UMC.

The Conference voted to change the Standing Rules.

Rev. Sherill Clontz, presented the property resolutions on churches that are closing.

She also noted that InnerChange in the South Central District was never chartered and is also closing.

Emily Chastain  then presented the Vulnerable AdultsSafe Sanctuary Policy. This will be voted on later during the Conference.

Nancy Cole presented the report on Church Health, sharing ways the Conference is working to help congregations be healthier including Abide for small congregations, Natural Church Development and other initiatives.

Rev. Matt Lacey presented the Mission and Advocacy report. He introduce Rev. Wade Griffith who shared about Magic City Miracle – a day of service in the Birmingham areas that was a partnership of local churches, government and corporate sponsors. He invited all congregations to spread this witness of service throughout the Conference and to organize a day of service in their community on September 28, 2014.

Throughout the business sessions, clergy and lay members of Annual Conference voted for delegates to the 2016 General Conference.  Below is a summary of Monday’s ballots.

Clergy Ballot 1: No election.
Laity Ballot 1: There is an Election: Steve Lyles.

Clergy Ballot 6: No election
Laity Ballot 6: There is an election. Carol Toney

Monday ended with the Service of Ordination, Commissioning and Licensing.  During this holy time of worship first time local pastors received their license, provisional members were commissioned, elders were ordained and the orders of one elder was recognized.

Bishop Wallace-Padgett preached a message from Jeremiah 17:7-8.  She encouraged the new ministers noting “In the liminality is the possibility.” She said we are in a time of transition, but encouraged the ministers to drink deeply form the living water.

The following people were commissioned to perform the duties and ministry of elder:

The following person was commissioned to perform the duties and ministry of deacon.

The following people were Ordained Elder:

The following person had his orders recognized as elder:

The North Alabama Annual Conference will continue on Tuesday.