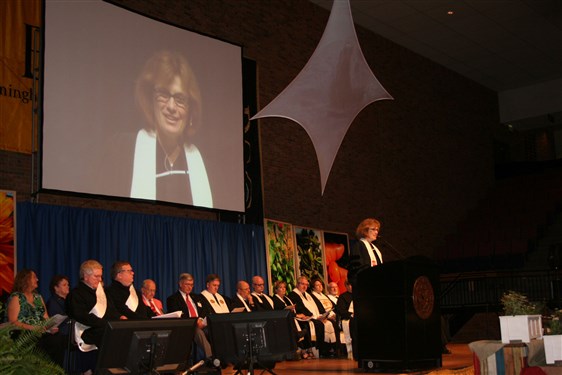 North Annual Conference members and visitors gathered in Bill Battle Coliseum on the campus of Birmingham-Southern College for the final day of the 2014 Annual Conference. The morning began with a time of worship led by Rev. Dedric Cowser.

Rev. Alan Beasley, pastor of Jasper First UMC, gave the morning’s message.  He told a story of serving as the evangelist at a District revival in New York.  On his way home he sensed God encouraging him to share the same message with the North Alabama Annual Conference.

He said, “If we look at every number given to us, we discover we are failing at what we are supposed to be doing [in our communities].”

He encouraged the Conference and its churches to take risks, noting the story of David found in 2 Samuel chapter 8.

“Risk does not mean doing something different. Risk is something you do for the glory of God that you will absolutely fail at if God doesn’t show up,” he added.

Noting that the church has gotten safe and comfortable, he encouraged local churches and individuals to take risks in order to change their communities. He encouraged the Annual Conference to use the annual meeting as a time to take risks and reach people for Jesus Christ.

Noting we need more than a visit of the Holy Spirit, but that we need a miracle, he asked worshippers, “What if God were to do a miracle in your church, in your community, in this Annual Conference? What would it look like? “

Following worship, the children who have participated in Annual Conference Kids’ Camp did a presentation of songs they had learned this week.

The Conference then adopted the proposed Vulnerable Adult Policy.

Liz Bowlin gave the children’s ministry report and introduced Rev. Melissa Self Patrick who reported on the work of the Pan Methodist Campaign for Children in Poverty.

Bishop Wallace-Padgett and the Conference then thanked Liz Bowlin for her work as Children’s Coordinator noting she is stepping down from the position,

The Conference was treated to a video featuring members of this year’s retiring class of clergy who shared observations and encouragements from their ministries.

Rev. Nancy Cole presented the Disaster Recovery report introducing the team and noting the work that has been done since the April 2011 tornadoes.

Rev. Randy Burbank presented the report of the Disaster Response team noting, the Conference is now combining Disaster Response and Recovery into one team. He encouraged those gathered to “do disaster response for Jesus.” Noting that in times of  disaster volunteers share God’s love with those who are hurting.

The Bishop reported on the new Conference Ministry Action plan proposal.  The  Conference voted to accept the proposed plan.

The North Alabama Conference will be led by lay and clergy growing in an ever-deepening relationship with Jesus Christ. These leaders will guide the church in transforming the world through making committed disciples, through supporting vital congregations and through developing critical conference missions and ministries to impact people around the world.

Mission:
Discover, Develop and Deploy Spiritual Leaders to make Disciples of Jesus Christ for the Transformation of the World.

What does the North Alabama Way mean?

This concluded the business of the 2014 North Alabama Annual Conference.

The Conference moved into a time of worship with the Sending Forth Service. The Service was led by the Order of Deacons and featured the District Superintendents calling out the names of clergy moving to new appointments; District lay leaders praying for all pastors and congregations in their District; and worshippers taking time to pray for the ministries in North Alabama.

Throughout Annual Conference clergy and lay members elected the North Alabama Conference Delegation to the 2016 General and Jurisdictional Conferences.