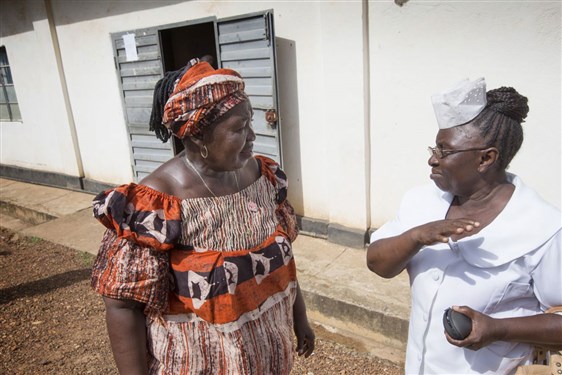 The United Methodist Church is launching an Ebola Emergency Response Plan in the face of an outbreak of the deadly disease in the West African countries of Sierra Leone, Guinea and Liberia.

The area of concentration is the Kailahun District in Sierra Leone, which joins Guinea and Liberia but extends beyond. The 599 cases reported as of June 20 suggest the largest Ebola surge in history. The disease has a death rate of 50 to 60 percent.

The church effort involves treatment, prevention and public education. It is a joint effort by West African United Methodist church leaders and regional health boards, denominational health facilities, missionaries, and the United Methodist Committee on Relief (UMCOR), the church’s humanitarian aid and health unit. UMCOR is part of the church’s mission agency, the General Board of Global Ministries. The United Methodist response is being coordinated with government and other private agency responses.

Ebola, for which there is no cure, is a virus that causes internal bleeding and organ failure. It can be passed to humans by contagious animals, such as bats and monkeys, or be contracted by eating infected meat, or passed from person to person by touching dead bodies or the transfer of bodily fluids.

“The current outbreak in West Africa,” according to Shannon Trilli, director of UMCOR Health, “is believed to be initially passed from bats to humans through consumption, being bitten, or through virus-laden saliva that bats leave on fruit then eaten by humans.” The virus can be killed through the use of soap, bleach, and sunlight.

International focus on the situation has been slow, partly because the area is isolated.  As the infection area crosses three governments, slow response and coordination between three nations has also hampered efforts to control the spread of Ebola. Bishop John K. Yambasu of the Sierra Leone United Methodist Church has emerged as a strong advocate of emergency efforts and is helping to mobilize the United Methodist response in concert with Bishop John Innis of Liberia, whose episcopal area incorporates Guinea.

UMCOR has committed an initial $25,000 to reinforce and extend church response in coordination with the Sierra Leone Ministry of Health, according to Ms. Trilli. The church has a total of four hospitals and nine clinics in the three affected countries: three hospitals and five clinics in Sierra Leone, one hospital and three clinics in Liberia, and one clinic in Guinea.

Additional allocations in response to specific requests may be possible as the program unfolds. UMCOR has also pledged $50,000 to the ecumenical ACT Alliance for the West Africa Ebola response.

Representatives of the United Methodist Health Board in Sierra Leone and UMCOR visited an Ebola testing site in Kenema in early June for briefings on the situation.  Health staff at Mercy United Methodist Hospital in Bo, the closest denominational facility to the outbreak, has already been given Ebola awareness training. Missionary Beatrice Gbanga in Sierra Leone is the primary local contact for the church response.

The grant will be used to purchase supplies for patient treatment and management, construction of isolation wards, and the training of front line personnel to protect themselves from infection. Another part of the emergency response is community health education and awareness through community visits, sermons, and the use of radio broadcasts and other mass communications.

“Our recently constituted annual (regional) conference health boards in Sierra Leone and Liberia are taking the leadership and assuming major responsibility for this churchwide emergency response,” said Thomas Kemper, chief executive of Global Ministries. “We have talked in person with Bishop Yambasu, our health boards are in place, our health staff members have been on the scene, and we are prepared to go the distance in rallying the United Methodist people to respond to the Ebola threat in West Africa.”

Your gift to UMCOR International Disaster Response, Advance #982450 will enable UMCOR’s response to this and other emergencies.
comments powered by Disqus