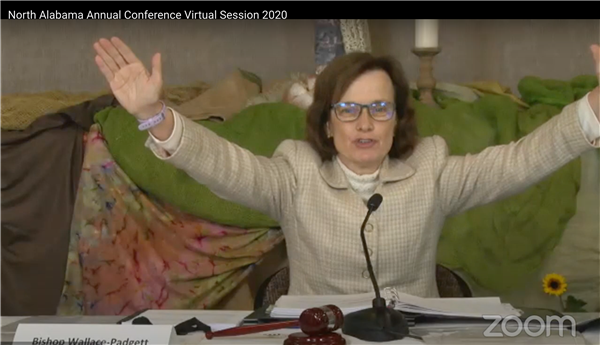 Bishop Debra Wallace-Padgett presided over her eighth Annual Conference in North Alabama. The theme was Singing God’s Song with the Forgotten. The focus on the Conference was one of its four ministry priorities - Ministry with the Poor.

The plenary session began with opening worship. After a prelude by Dr. Anthony Powell, an ensemble led the Conference in singing the traditional opening hymn of “And Are We Yet Alive.” Guest Preacher Bishop Leonard Fairley, of the Kentucky Annual Conference, offered an opening sermon based on the theme verses of Luke 4:18-19. In discussing ministry WITH the poor, Bishop Fairley reminded North Alabama United Methodists "You are both called and anointed to be bearers of God's grace and love and peace and justice. North Alabama, that calling remains the same even in the midst of fear - even in the midst of racism and polarization and anxiety. The calling remains the same, even in the face of COVID-19 and news cycles filled with sensational soundbites. Our calling remains the same even in the midst of hatred and division that is being spread through social media. We are called and anointed by God as passionate, spiritual disciples."

Conference Director of Ministry of the Poor Dr. Adlene Kufarimai said a prayer of thanksgiving for the special offering designated to support QuadW Missional Internships - a potentially life-changing mission experience for young adults, 19-25 years of age, which allows them to experience ministry with the poor. The Conference has sponsored 40 young adult interns over the past three summers. The generosity of local churches to this year's offering will provide for 2021 interns and beyond.

The Conference then began to work through the business not on its consent agenda.

Bishop Wallace-Padgett invited the Conference to pause from its work as she and Director of Ethnic Ministries Rev. Donald Smith led Conference members and viewers through a time of guided prayer specifically focusing on the Church's response to the coronavirus pandemic and racism.

As the Conference returned to its business:

The Annual Conference plenary then closed with a time of Closing Worship. The service began as new appointments, most of which took place on July 1, were officially fixed. District Superintendents read the names of those clergy who had moved to new appoints as all clergy appointments scrolled across the screen. The District Lay leaders then joined together in a prayer of blessing for the clergy, churches and their ministry together.

Bishop Fairley shared another message with the Annual Conference focusing primarily on his life story and how individual Christians who purposely reached out to his family living in poverty had made a difference in his life. He said, "It's amazing what happens when you are in ministry with the poor. I would not be here with you now if there had not been people who took seriously what Jesus said on that day in that synagogue as was his custom. That the Spirit of the Lord was upon him to preach good news to the poor, recovery of sight to the blind, release to those who were oppressed, to proclaim the acceptable year of the Lord. And the acceptable year of the Lord is to feed the hungry, clothe the naked, visit the sick and share words of health, healing and hospitality."

An ensemble led by Nancy Beard led the Conference in the closing hymn "Jesu, Jesu." Bishop Wallace-Padgett then sent Conference members and guests forth with a benediction.

Later that afternoon during The Service of Ordination the Conference ordained five new full-connection Elders:

On Thursday, October 1, the Annual Conference will honor those clergy and clergy spouses who have died in the last year with a recorded Memorial Service that will premiere online at 6 p.m. North Alabama United Methodists are invited to watch this special service together on the Conference website (www.umcna.org). Those who will be remembered include: