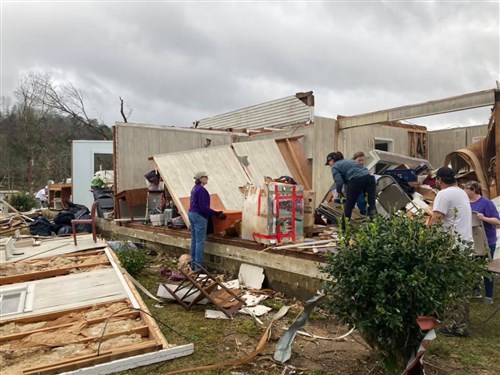 On Thursday, March 25, 2021, multiple tornadoes left paths of destruction across Alabama. In Calhoun County, five lives were lost. In that same area, the Ragan Chapel United Methodist Church building in Ohatchee was destroyed. Other communities throughout Alabama also suffered damage to homes and businesses.

As often happens, after winds of destruction tear apart buildings and lives, the United Methodist connection drew closer together to reach out to individuals and communities as the hands and feet of Christ.

As media began to report known damage, many United Methodist Churches began to reach out to their local communities, to identify those who needed assistance. The Conference Disaster Response Team and Disaster Response Warehouse also set themselves in motion to prepare to respond in affected areas.

On Friday and Saturday, Asbury United Methodist Church (South Central District) served as a collection and distribution site for those who were affected in their community and also other communities across Shelby County. They assembled and distributed hundreds of tornado buckets as well as food, water, toiletries, cleaning supplies, diapers, tarps, blankets and more.

On Saturday, volunteers from throughout the Cheaha District gathered in Ohatchee and the site of the destroyed Ragan Chapel UMC building for a workday. Volunteers from Goshen UMC, Jacksonville First UMC and Ohatchee UMC joined members of Ragan Chapel in cleaning up the site. Michael Dunbar, pastor of Goshen UMC and the new Cheaha District Disaster Response Coordinator, organize the workday.

Share how your congregation is reaching out to those affected by the tornadoes in the comments below.