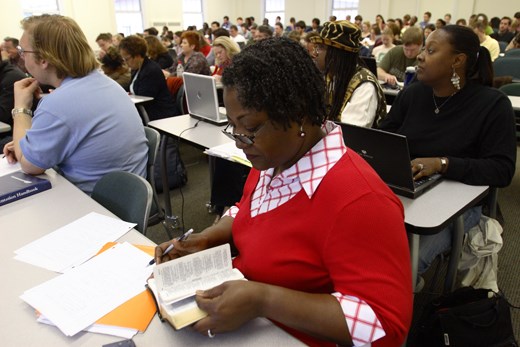 Emory University's Candler School of Theology has received a $460,000 grant from Lilly Endowment to lead a study of the purposes of theological education in a time of significant change.

"In the last few years it seems that every month has brought news of dramatic change at some theological school," says Smith. "Decisions about faculty hiring and promotion are opening old questions about the mission of a school. New degrees are being created to respond to changing patterns of ministry and identity. Financial difficulties are closing some schools and forcing drastic cuts at others. At the same time, new kinds of institutions are sprouting up all over."

These new realities signal one way we are "between times" in theological education, but it's not the only way, says Smith.

"Not only are we moving from one institutional configuration to another—or to multiple others—but we are also 'between times' on a deeper level. Christians see the present age as a time 'between the times' of the resurrection of Jesus and the fullness of redemption," says Smith.

"When you think of history like this, another dimension starts to come into view," he says. "The changes of the present moment are never less than institutional shifts that demand historical and sociological analysis. But they are always more. And so the times require theological discernment, too."

According to Smith, the project's goal is to initiate conversations that deepen and renew visions for theological education.

"In times of change it's tempting to chase trends or lock down into a managerial mindset that forgets the institution's purpose as it tries to preserve the institution in its present form," he says.  "But it's important to keep the real purposes of our work in mind. And this project begins with the conviction that the best conversations about purposes will involve a deep diversity of voices."

Christopher Coble, vice president for religion at Lilly Endowment, shares this vision. "Theological schools play a critical role in preparing leaders for congregations and religious communities," he says. "To do this well, theological educators must be attentive to the shifting leadership needs of congregations while they work to address their own institutional challenges. Theological Education Between the Times will help theological schools step back and assess the changes that are happening around them. This knowledge will help them identify educational priorities and make deliberate decisions about how to advance their important missions today."

The project's consultations will meet in five different cities in the spring of 2015 and will include a total of more than 50 educators from many different Christian traditions and types of institutions: formally accredited graduate and professional schools, networks that form leaders of communities of recent immigrants, and in-house mentoring programs in mega-churches, among others.

"The consultations will serve as a time to get the lay of the land and see what people are thinking and doing in a wide variety of contexts," Smith says. "The key is to get people together to think about why they do what they do."

Smith cites the growing number of forms that ministry takes as one example of a significant shift affecting theological education. "As congregations hire more people who are not ordained to play various roles, and as more people who are ordained lead organizations other than churches, the old lines between clergy and laity begin to blur," he explains. "And as the forms of ministry multiply, so do the pathways to them."

Theological schools are designing new degree and certificate programs to address these shifts, and increasingly re-examining their aims and their structures as they update their offerings.

Candler's Dean Jan Love sees the project as mutually beneficial for theology schools and the church and its ministries.

"By reflecting on the higher aims of theological education, we can begin to bridge the gap between long-held scholastic traditions and the dynamic world in which theological educators and our graduates serve," she says.

Smith says he feels a sense of urgency toward the project because of the rapid pace at which the changes in theological education are happening.

"I have come to believe that we're in the middle of a real sea-change in theological education," he says. "That conviction makes me think that reflecting on the highest purposes of theological education is all the more important."
Discover, Develop and Deploy Spiritual Leaders to Make Disciples of Jesus Christ for the Transformation of the World.