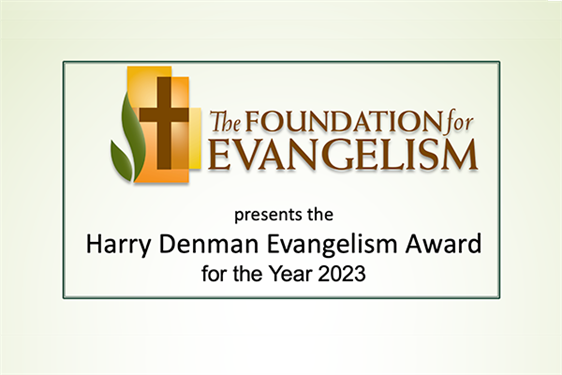 The Conference Evangelism Team is now accepting nominations for the Harry Denman Evangelism awards. The nomination deadline is Feb. 28, 2023.

The Foundation for Evangelism began the Harry Denman Evangelism award in 1981 as a way to honor United Methodist clergy, laity and youth in each Annual Conference who exhibit unusual and outstanding efforts for their work in Christian evangelism. The award is named for the late Dr. Harry Denman, a Birmingham native and distinguished lay evangelist, who founded the Foundation on Evangelism in 1949.

United Methodist clergy, laity and youth are eligible for this award. Please note that a primary indicator of this award is that it showcases professions of faith. Neither the size of the local church, the age or gender of the nominee, nor the length of their service will limit eligibility.

You may submit your nominations by using an online form.

You may also download a printable form to complete and mail in your nominations.

When submitting a nomination, please prayerfully answer the questions noted on the nomination form. If you believe that a letter of recommendation would be helpful in the selection process, please submit those at the time of your nomination. Please do not send audio or video material such as information on a CD or DVD.

The 2023 clergy, laity and youth recipients will be announced at the North Alabama Annual Conference on June 21-24, 2023.

For more information on Harry Denman please view the information on the conference website at www.umcna.org/denman or The Foundation for Evangelism at www.foundationforevangelism.org.