Advocacy For Social Justice Blog: The Crisis at our Border 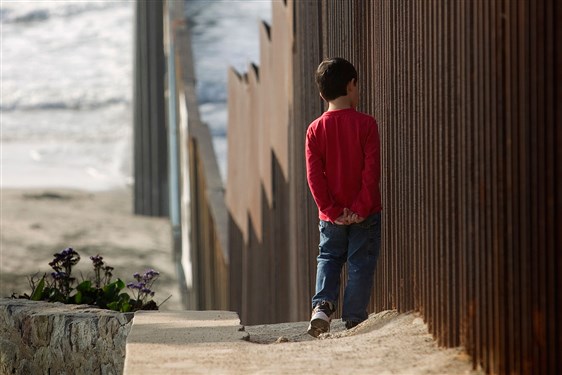 Photo: A young boy peers through the border fence between the U.S. and Mexico at El Faro Park in Tijuana, Mexico. A UMNS photo by Mike DuBose.

The article below was written by John Bailey, pastor of Missions and Evangelism, at Huntsville FUMC and appeared in the Aug. 4 opinion page of al.com.  John has given us permission to share his words on our blog.

In recent months over 34,000 children from Central America have come to the U.S. border seeking refuge in the United States. The theories as to why these children are making this harrowing journey are many.

Some reports indicate that the drug cartels in the countries from which most of the children are coming -- Honduras, Guatemala, El Salvador -- are encouraging families to go north for safe haven. Still others believe the word "amnesty" in any discussions for comprehensive immigration reform have somehow served to "draw" these children here.

The first theory would not surprise me, as I would not put anything beyond the drug cartels. The second theory -- that somehow discussion about comprehensive immigration reform would cause parents to send children to The United States -- just shows ignorance of what is going on in the world today.

Discussion about comprehensive immigration reform does not cause an exodus like we are witnessing. There is so much more going on here than "sending a message." To use this crisis as a reason to halt discussion and to silence those who desire to consider all options is for us to further bury our head in the sand, look the other way and ignore the suffering of human beings.

What is going on here is pretty straightforward: We are witnessing the failure of nations to protect their people, especially the most vulnerable. The President of Honduras, whose country has the highest murder rate in the world, describes these children as being "displaced by war."

There is a war going on in these countries. Children and adults are losing their lives, and these refugees are coming to our borders seeking safety and refuge from organized gangs of killers. Once again, I am amazed that, in the light of this humanitarian crisis, we continue to bicker and argue over whether conservatives or liberals "caused" this crisis.

Once again, we find our politicians using this as a reason to blame and discredit "the other side." Once again, we blame the victim, vilifying those seeking refuge, adding to the suffering.

The simple fact is that we can do something. We can make a difference in the lives of these children. We must first see this for what it is: This is a humanitarian crisis.

Those who are studying the situation tell us it will just get worse, that this is the first wave and more are coming. Will we be prepared? Will we work together to care for the vulnerable and weak? Or, will we continue to blame, obfuscate and avoid the fact that we are a country with these words at its gateway:

"Give me your tired, your poor, Your huddled masses yearning to breathe free, The wretched refuse of your teeming shore. Send these, the homeless, tempest-tossed to me, I lift my lamp beside the golden door!"

The Rev. John Bailey is pastor of missions and evangelism at the First United Methodist Church in Huntsville, Ala. He can be reached at John@HuntsvilleFirst.org.

Advocacy For Social Justice Blog: The Crisis at our Border