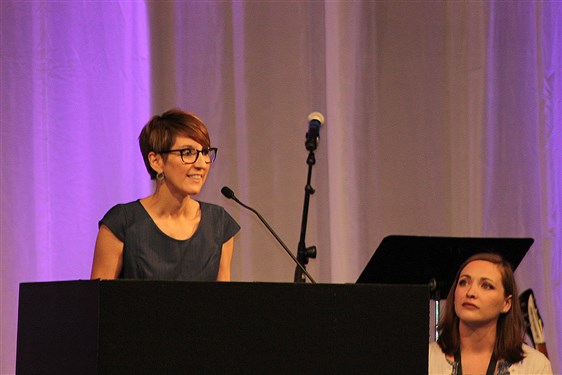 Each year the Conference Commission on the Status and Role of Women (COSROW) recognizes a United Methodist willing to risk and stand up for the rights of women and ethnic minority persons through the presentation of the Louise Branscomb Barrier Breaker Award. During Annual Conference the 2017 award was presented to Allison Dearing, a member of Birmingham First UMC and creator of One Place Metro Alabama Family Justice Center, an organization which provides coordinated services to victims of domestic violence and sexual assault through a multi-disciplinary team working together under one roof including the Jefferson County District Attorney’s Office, City of Birmingham-Birmingham Police Department, YWCA-Central Alabama, and the Crisis Center, Inc.

Allison was nominated by Birmingham First UMC Senior Pastor Rev. Keith Thompson, as well as, other members of the congregation who noted both her public work and personal care and compassion for others. They also shared how she was instrumental in helping the Birmingham First congregation respond when a tragic case of domestic violence touched their own church family in May 2016.

Rev. Kelsey Grissom presented the award saying, “Allison Dearing is someone who has shown courage and willingness to stand up for others, particularly for those who are victims of domestic abuse. Her work is changing the lives of women and their families across Birmingham.“

In accepting the award Dearing said, “One in four women and one in seven men will be the victim of domestic violence in their lifetime. And from where I sit, and I hope where you sit, those numbers are unacceptable and overwhelming and represent so much work for us to do. Even in the midst of a society where violence seems commonplace, in the midst of this tragedy that shook [the Birmingham First congregation} to our core, we are finding hope.”

She added, “This is not an us and them kind of problem. This impacts us.”

During the award presentation Rev. Grissom also recognized the record number of other nominees for the 2017 Louise Branscomb Barrier Breaker Award. They include the following:

Watch the entire presentation below.