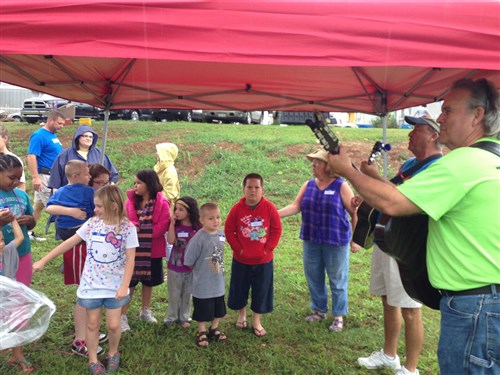 Jesus called his appointed together on Sunday and sent them out ahead of Him in pairs . . . He sent them to every place that He intended to go. They went out into the world -- dressed in shorts, blue jeans, work boots, raincoats, ball caps and T-shirts. Even though it was raining, they went out, not worried about the weather but looking forward to proclaiming that the Kingdom of God had come near. They visited the least, the last and the lost.

Yes, Russellville First United Methodist Church made a decision to BE the church, to put hands and feet to the love of our Savior. On a recent Sunday, instead of holding church services, the congregation came together in their shorts, jeans, boots, and t-shirts, sang a few songs, prayed and went into the community to put Jesus’s love into action.

They went into a nursing home, to the jail, to a trailer park, apartment complexes, drive-thru windows, and several neighborhoods. They offered light to those who had been without light for days, weeks and months. They installed smoke detectors and changed the batteries in smoke detectors whose batteries had died. They went into one of the worst trailer parks you can imagine and offered the joy of music, hands of love and food for hungry bellies and souls. They visited the jail spending time with women who had lost hope, offering words of encouragement and hope in the middle of their struggles. They walked up to doors and delivered boxes of food to those whose pantries were empty. They took hot meals into the homes of those who were unable to prepare them. They pulled up to the drive thru windows, all over town, offering a smile, words of thanks, and a flower of blessing as they drove off toward another stop. They stood in the falling rain, cutting, trimming and slipping in mud as they cleared away debris and trimmed shrubs and bushes. They offered an opening into a new world that had not been seen in years. They walked the halls of Burns Nursing Home and the Country Cottage offering Jesus, both body and blood, to those who had not tasted and seen how good He is in years. Continually, they proclaimed that the Kingdom of God was not only near, but it was here in this very moment. 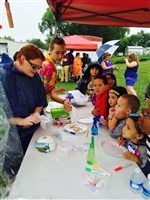 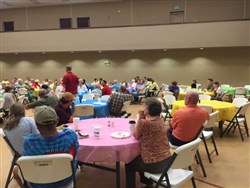