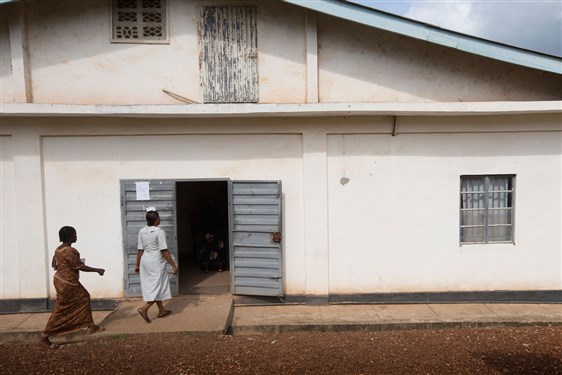 Medical workers enter the Lassa fever laboratory at the government hospital in Kenema, Sierra Leone, where current efforts are centered on preventing the spread of the Ebola virus. Photo by Mike DuBose, UMNS.

Efforts to contain the Ebola outbreak have met difficulties due to widespread myths and misinformation about the deadly virus. In collaboration with bishops in Sierra Leone and Liberia, and their communicators,United Methodist Communications has implemented a crisis communications strategy in West Africa aimed at controlling the outbreak, saving lives and comforting those affected by this epidemic.

United Methodist Communications is also in contact with bishops in Nigeria and Cote d’Ivoire.

“In the Ebola crisis, communication precedes prevention and treatment,” said the Rev. Larry Hollon, chief executive of United Methodist Communications. “The contagion cannot be contained without clear communication about the reality of the Ebola virus, sanitation, isolation of sick people, and proper handling of the deceased. This has to be communicated effectively and widely. In these circumstances, a clear message saves lives.”

Sierra Leone and Liberia received $10,000 crisis communications grants to create and distribute banners, posters and photocopies of messages that aid in prevention, diagnosis and treatment; messaging for radio to address prevention, care and pastoral needs; and Internet access.

Additionally, at the request of Bishop Innis and his communicator, Julu Swen, United Methodist Communications is sending text messages to church leaders in Liberia to keep them informed and encouraged in this time of crisis. African communicators are being equipped and trained to take over this communication in the near future.

United Methodist Communications’ Information and Communications Technologies for Development (ICT4D) team learned from a recent CNET report that the majority of the telecommunications market in Liberia is wireless, with 69% relying on mobile phones. That number is 67% in Sierra Leone, making text messages a crucial way to distribute prayers for encouragement and life-saving messages.

The first text message was sent August 19 on behalf of Bishop John Innis of Liberia to his district superintendents. The agency will also be sending approved health and pastoral messages on the bishop’s behalf until the Liberian conference communicator takes over the task. The first message sent reads: Ebola is real. It kills with little warning. Please adhere to health messages to safeguard your family. Let us be in prayer. God is with us. – Bishop John Innis.

“Prayers of Encouragement,” an Upper Room publication, will be made available to World Reader users in a variety of formats, including tablets, smartphones and biNu, billed as “Your Smartphone in the Cloud.” This is technology that United Methodist Communications has tested and used previously and is well-received in developing nations. Additionally, the agency will send words of encouragement from this booklet via text.

The agency has also partnered with Iheed and award-winning animator and activist Firdaus Kharas of Chocolate Moose Media to create a short animation that promotes prevention and dispels local rumors. The animation will be made available in local dialects for use by community health workers and for television.

Along with these efforts, the United Methodist Committee on Relief, Church of the Resurrection and the Indiana Conference of The United Methodist Church have all sent grants to affected countries. These funds support United Methodist hospitals and health clinics, and will be used to purchase supplies for patient treatment and management, construction of isolation wards, and training of frontline personnel to protect themselves from infection.

The Foundation for United Methodist Communications has established an emergency communications fund where individuals can donate to provide communications support in crises and disasters, such as this outbreak.