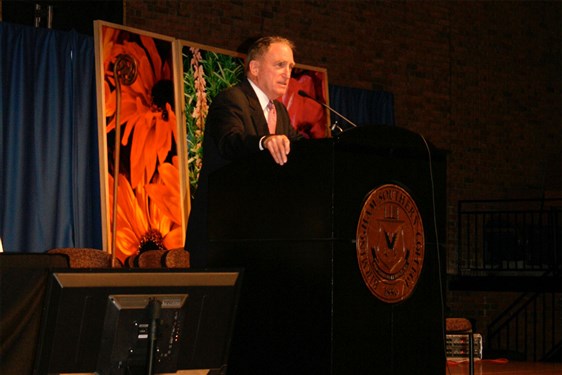 Speaking at a campus-wide gathering on Tuesday, Dec. 2, 2014, Gen. Charles C. Krulak announced his plans to retire as president of Birmingham-Southern College in June 2015.

Krulak started full-time duties as the 13th president of BSC on June 1, 2011.

"Speaking on behalf of the entire college community, we are deeply and eternally grateful for Gen. Krulak's transformational leadership," said Bruce Rogers, chair of BSC's Board of Trustees. "After four years of service as president, the General will certainly 'graduate with the highest honors.' Gen. Krulak's positive and lasting impact on this College is profound; his contributions here will be remembered, respected and honored."

Krulak told students, faculty, and staff that he feels it is the right time to make a leadership transition at the college.

"Our primary goal is to help the college prepare our students to live lives of significance," said Krulak, 73. "Through the remarkable efforts of a dedicated faculty, staff, and a loyal alumni network, and an engaged community, that mission is being accomplished every day."

Consistent with the succession plan recently adopted by the trustees, the Board has commenced the process of selecting the 14th president of the college.

Krulak was appointed the 31st commandant of U.S. Marines Corps on July 1, 1995, a post he held until his retirement June 30, 1999. As the senior leader of the Marine Corps, he was a member of the Joint Chiefs of Staff with overall responsibility for recruiting, training, operational readiness, and welfare of more than 220,000 active and reserve forces and 20,000 civilian employees.

Following his retirement from military service, Krulak was named in 2001 as chairman and chief executive officer of MBNA Europe Bank in Chester, England, where he spearheaded a financial turnaround for the third largest credit card provider in the United Kingdom and the largest credit card provider in the Republic of Ireland. In 2004, he joined MBNA America Bank N.A. in Wilmington, Del., as vice chairman and chief administrative officer.