North Alabama nears its $1 million goal for Imagine No Malaria 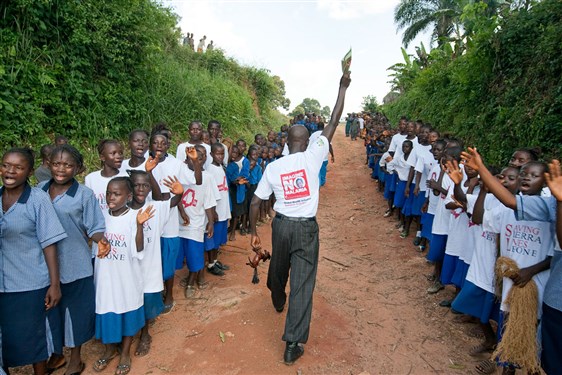 A teacher leads schoolchildren in singing to welcome a delegation from Saving Lives in Sierra Leone, part of the Imagine No Malaria campaign in the Gbo Chiefdom outside Bo, Sierra Leone. A UMNS photo by Mike DuBose.

The North Alabama Conference has raised more than $950,000 toward its goal of $1 million for Imagine No Malaria, the comprehensive effort by The United Methodist Church to eradicate death by malaria on the continent of Africa.

“Thank you to all of the churches and individuals that have contributed thus far,” says campaign coordinator Charlie Carlton. “We are close to the finish line and are asking churches to re-double efforts and make an additional contribution or pledge to help our Conference reach the $1 million goal.”

The more than $950,000 raised by the North Alabama Conference is more than double any previous conference mission campaign. The 2014 Annual Conference received the largest special offering in Conference history to go toward this campaign.

Bishop Debra Wallace-Padgett says, “Our $1 million goal is in reach. I am grateful for the churches and individuals who have so generously participated in this campaign. I know that together we can reach our goal and save lives.”

Every 60 seconds, malaria claims a life in Africa. It kills an estimated 655,000 people each year, most of them children under 5 and pregnant women. Transmitted through the bite of a female anopheles mosquito, malaria is a parasite that initially causes fever, vomiting and joint pain. Left untreated, its symptoms progress to convulsions, organ failure and death. Yet malaria is 100% preventable, treatable and beatable! The work of Imagine No Malaria and its partners is already making a difference. The World Health Organization reports that malaria-related deaths have been reduced by almost 50% since 2007.

Churches and individuals are encouraged to make end-of-the-year donations to help reach the $1 million goal. Churches can also make a pledge to be paid next year.

North Alabama nears its $1 million goal for Imagine No Malaria