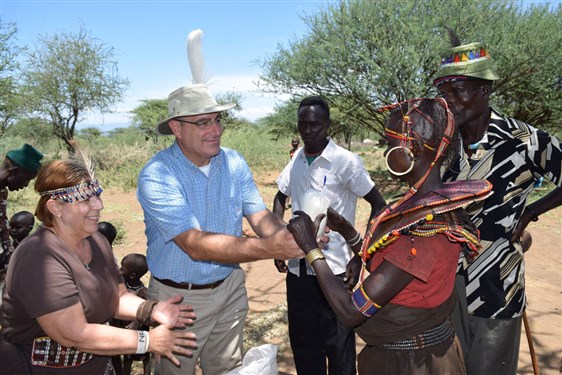 Missionary Teresa June Webb and Rev. John Tanner, senior pastor of Cove UMC, give food to a Pokot woman during ceremonies to open the first water well drill on the extinct volcano on Mount Paka in a remote region of Kenya. (Photo by Curtis Coghlan)

MOUNT PAKA, Kenya — The girl, maybe seven years old, gulped from the faucet like she had never tasted water in her life.

Around three other taps, dozens waited to fill five-gallon cans, buckets and even bags made of animal skins. Before topping off, some washed their faces, hands and feet. Cattle and goats drank long and deep at concrete troughs. Shepherds brought the new water to the camels in nearby pens.

The thirsty girl drank nonstop for almost five minutes. She finished by sticking her head under the gushing stream. No one minded. No one was in a hurry. Not this day — the first day in the hundreds of years of their history that these Pokot people on Mount Paka had clean water of their own.

On the dusty, scorched slope of the long-extinct volcano the water poured and so did the tears of missionary Teresa June Webb, her pastor, John Tanner of Cove United Methodist Church in Huntsville, and Dick Stanley, another member of the church who engineered the water well project from nine time zones away. It was the completion of a nearly three-year adventure that began with the people of Cove’s annual “Big Give” campaign in late 2011.

“I’m totally overwhelmed. It was hard, very hard, but we never gave up,” said Webb, water running down her own chin. It was the first time in years that “Mama Paka,” as she is known by the Pokot, could relax.

Babies dying on the trail

A determined and passionate woman, Webb has been going up and down the steep trail to the village of Chepungus for more than four years after a man pointed to the mountain and told her of a tribe that had never heard of God.

“My first question was, ‘when do we go?’” said Webb, the founder of Desert Rose Ministries in Nakuru, Kenya. She drove and hiked there shortly afterwards and found most of the tribe still wearing animal skins with little knowledge of the outside world. “I felt like a missionary from 100 years ago.”

One of her first observations was the extraordinary amount of time the women spent each day searching for water. The eight-hour round trip to a muddy sinkhole almost 10 kilometers away took its toll on the women who carried the 40 pounds of water on their backs or head, half the way trudging uphill. “(Pregnant) women were losing their babies on the trail,” she said.

The women made the trip every day of the year and had little time for anything else, except cooking. Their children, left waiting for their mothers to return, spent their time herding the livestock instead of going to school.

The missionary and Stanley started talking about her dream of bringing clean water to the village. But Stanley, a practical, methodical engineer, is no dreamer. He did his research, talking to water experts and calculated the high risk of failure versus the astronomical drilling and pumping costs. He did the math and made his conclusion — Cove Church needed to fund the drilling of the well.

Tanner, who had seen intense poverty while serving in slums in Kenya in 2010, was shocked by the conditions described by Stanley and Webb. “I had Kenya on my heart already. In other words, I was already primed, so it didn’t take a lot of convincing,” Tanner said.

Why would this thriving 1,500-member church nestled in a beautiful valley in one of the most affluent ZIP codes in the South be concerned about bringing water to one of the most remote areas of Kenya?

“Her (Webb’s) love for the people inspired us all,” Tanner said. “Our people (at Cove Church) tend to respond generously to a big challenge and to meet a very specific, tangible need. This project provided both. Of course, I had no idea the magnitude of what we were getting into.”

Tanner took the challenge and delivered it to his congregation in November, 2011. It was an audacious mission, to be sure — to find and deliver water where the Kenyan government, the colonial British, or any other world relief agency had never attempted.

“The (Kenyan) government tried their best. But since independence 50 years ago, there’s been no water,” one of the area chiefs said. “But God did wonders to give us clean water. This is God’s water.”

But the project was not without many obstacles.

Will Furlong, director of Africa programs for Water Missions International, told Stanley it was “the most complicated and difficult well (project) we have ever been a part of” in Africa.

The first well drilled to more than 1,000 feet came up dry. “Nothing. Not a hint of water — not even moist gravel,” Stanley said. But, when the project looked lost, hope emerged.

Stanley said he heard about John Lane, a world-renowned hydrologist at the U.S. Geological Survey and a research professor at the University of Connecticut, who believed in the “urgency of finding water in difficult places.” Lane volunteered to spend a week surveying the volcanic ground.

“What’s interesting is, his calculation of the depth we would find water was almost exactly correct,” Stanley said.

The water was very clear and clean, but because of the geothermal conditions on Mount Paka, it came out of the ground at 122 degrees. Locating a manufacturer that could make a custom-order pump for those conditions took more time. And for a time, that pump made in Denmark was lost in a sea of shipping containers.

Since the nearest electricity is 20 kilometers away, a giant solar array generating 8,600 watts had to be built to pump the water 720 feet to the surface.

Finally, this fall, the well opened to hundreds from several villages on the mountain.

Moses Akeno, a Baringo County sub county administrator, believes there was only one explanation to finding water so deep in this parched place. “This is a miracle. God brought you here and blessed us with water.” He called the pastor, the engineer, the missionary and all the members of the church “heroes.”

Another government official agreed. “We are very grateful … to those (at your church) who denied themselves for the sake of these people.”

The success of the well is inspiring Kenyan officials. Baringo County recently announced plans for major improvements to the nearly vertical road going up the mountain. After that, they promise to look for funds for a school and a small medical clinic.

Considered to be the wisest man on the mountain, Ametal is the tribal father to Webb. “God told me this land would be blessed through my daughter here.”

“This is not an easy place,” Ametel said, referring to the arid land and droughts that have, at times, resulted in only 10 inches of rain falling in a year. “We have nothing but our animals to live on. When drought comes our animals die.”

“It is like we’re starting a new life. We have water. Everything now is possible.”

Curtis Coghlan is a Resident Missionary at Kenya Relief.org in Migori, Kenya. He was an editor and journalist for news organizations for more than 36 years. He and his family have been members for 10 years at Cove United Methodist Church, which equipped them to serve as missionaries in Africa.

A Pokot woman fills her can with clean water from the first well drilled on Mount Paka, an extinct volcano in a remote region of Kenya. (Photo by Curtis Coghlan) 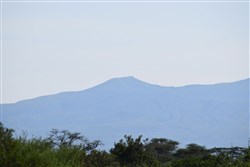 A view of Mount Paka, a long-extinct volcano in Kenya, where Cove United Methodist Church and missionary Teresa June Webb completed the first well in the history of the remote Pokot tribe. (Photo by Curtis Coghlan) 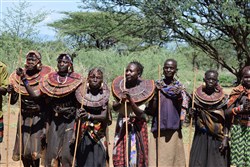 Pokot women dance and celebrate the opening of the first water well drilled on the remote extinct volcano on Mount Paka. (Photo by Curtis Coghlan) 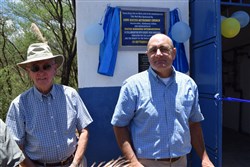 Engineer Dick Stanley, left, and John Tanner, senior pastor of Cove United Methodist Church in Huntsville, speak during a celebration to open the first water well on Mount Paka in a remote region of Kenya. (Photo by Curtis Coghlan) 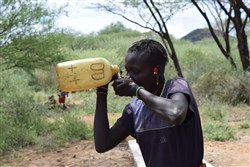 A Pokot woman drinks clean water from the first well drilled on Mount Paka, an extinct volcano in a remote region of Kenya. (Photo by Curtis Coghlan) 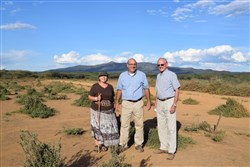 Missionary Teresa June Webb, John Tanner, senior pastor at Cove United Methodist Church in Huntsville, and Dick Stanley, an engineer and member of Cove Church, stand in front of Mount Paka after a day-long celebration to open the first water well on the extinct volcano. (Photo by Curtis Coghlan)