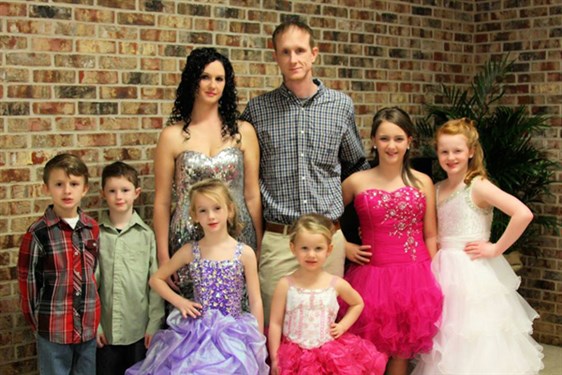 Sometimes when the preacher gets laryngitis, God uses someone else. Who would have known that God would take an ailing preacher, a nervous spokesperson and a grandmother, throw in several formal dresses and some salads, and use them to make a home for family in need? Well, I guess we all should have known...it’s God, after all!

One Sunday back in October, the preacher, Rev. Earl Freeman, woke up and couldn’t talk – seriously! He was lucky to get through the announcements at the morning service. Providentially, he had scheduled a special speaker—Theresa Clark, director of the Marion County Chapter of Habitat for Humanity. Because of the laryngitis, her scheduled ten-minute talk turned into a full-fledged sermon, even though she was nervous about the whole thing.

During that sermon the grandmother, Hilda Smith, heard something...not from Theresa, but from God. “I could do something,” she said (not out loud, of course), “I need to do something because I’ve been too selfish lately.” Theresa was talking about the next “Habitat Family” – Jacob and Misty Brown and their six children. Church members knew their story: young couple, blended family, taking in and adopting two nieces and a nephew when their father died. The two oldest girls were baptized this summer. “The whole family is just precious!” was a common refrain.

The next day, Hilda called the preacher. “Preacher!” she said, “You won’t believe this! I think God told me to do something during Theresa’s talk yesterday. We’re going to have a fashion show to raise money for Habitat.” Long story short: an idea popped up, Hilda called her friend with a formal dress shop, called other folks, and, within a week, had it all planned.

After that, every week or so, Hilda would call the preacher, “Preacher! You won’t believe this! This thing is just getting huge!” Eighty models, food, music, matching donations – God’s goodness just got bigger and bigger.

On Jan. 18, it all came together. The Winfield Community Center was filled to the brim – about 300 guests. God directed it all. After all the tickets were tallied and the donations received, more than $9,000 was raised to insure a safe, happy home for Jacob, Misty and the kids. God is good!
comments powered by Disqus