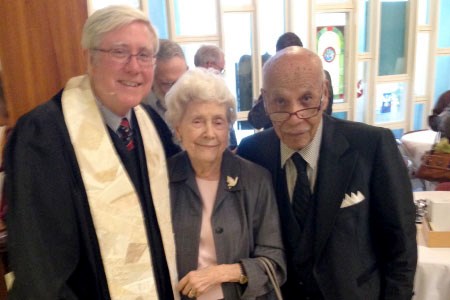 Rev. Dale Clem, Evelyn Howie, and Dr. Sonny Hereford III, a retired physician in Huntsville who spoke at Monte Sano UMC on Sunday morning, January 18, 2015 about segregation and how the Civil Rights movements changed Huntsville. In September, 1963, Hereford’s son was the first black child to integrate an all-white school in the state of Alabama.

In a conversation with Rev. Dale Clem during the sermon, 84-year old Dr. Sonny Hereford III inspired and informed the Monte Sano UMC congregation by painting vivid and humorous portraits of segregation in Huntsville, and the steps which he helped lead to integrate the city’s lunch counters, hospital, parks, theaters, bowling alley’s, hotels, schools and work-force.

The sit-ins began in January of 1962, and by July, the lunch counters, theaters, and parks were integrated.  Thirty-five families signed up to send their children to “all-white” schools but after the newspaper printed their names and addresses, some lost their jobs and others were told they would lose their jobs if they tried to integrate the schools. The number of families trying to integrate the schools dropped to four.  The schools refused to admit the black children so the remaining four families went to Federal Court.  Judge Grooms heard the case in August 1963 and ruled that the Huntsville City School system would admit these four children and come up with a plan to integrate all schools by January 1964.  Huntsville was integrated a year before President Johnson signed the Civil Right Bill.  The Huntsville City Schools is building a new elementary school named for Hereford and his son.

Monte Sano UMC had a special connection to the civil rights movement because member Evelyn Howie signed more than 50 bonds to bail protesters out of jail who had been arrested for participating in the sit-in’s in downtown Huntsville. Hereford said to his knowledge there were only two white persons to sign bonds and that was Evelyn and her husband, the late Dr. Virgil Howie.

As a surprise, Dr. Hereford and the church honored Evelyn with flowers and a reception.  In asking where Evelyn and her husband got interested in working for Civil Rights, she answered that they were shaped by their Methodist churches.  As a teenager in Clarksville, Tennessee, her pastor had advocated for civil rights and her husband grew up with Dr. William Selah as his pastor in Jackson, Mississippi.  The couple met at Lake Junaluska with this shared vision. Dr. Selah and his wife retired on Monte Sano and were part of the congregation for many years.

Hereford, the co-author with historian Jack Ellis, of Beside the Trouble Waters: A black doctor remembers life, medicine, and civil rights in an Alabama town (The University of Alabama Press, 2011) recorded the pickets, arrests, and civil rights movement using an 8 millimeter camera.  His films were later made into documentaries. His film about Birmingham civil rights movement called “Mighty Times: The Children’s March” won an academy award in 2004. 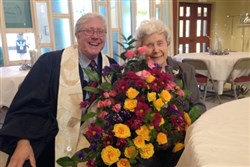 Pastor Dale Clem with flowers for Evelyn Howie who signed the bonds to bail more than 50 black students out of jail for participating in the sit-ins in Huntsville in 1962.