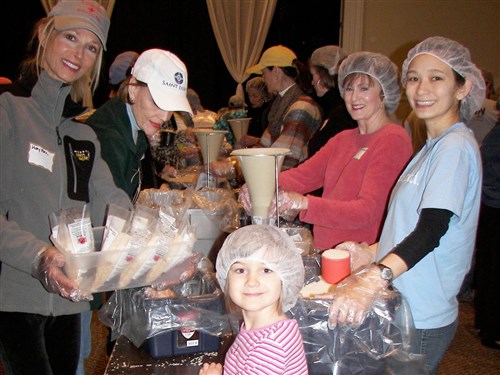 On Sunday through Tuesday, February 8-10, 2015, some 2,000 volunteers will gather at Canterbury United Methodist Church in Birmingham to work in the church’s fifth annual Stop Hunger Now campaign.

During this year’s three-day event volunteers plan to assemble a half-million meals for school children and orphanages outside the U.S. The meals include a combination of rice, soy, dehydrated vegetables, and a flavoring mix including 21 essential vitamins and minerals in small meal packets. Each meal costs only 25 cents. The food stores easily and has a shelf-life of five years and transports quickly.

“Five years ago we began partnering with Stop Hunger Now and now thousands of volunteers come together across race, socioeconomic, faith, age and political differences to think and act on world hunger,” says Rachel Estes, Outreach Director at Canterbury UMC.

A meal-packaging event is a volunteer-based assembly-line production process. At the first station, volunteers mix four meal ingredients through a funnel into a specially designed bag. The bag then is carried to the next station, where it is weighed and heat-sealed shut. The sealed bag is brought to the next station, where bags are counted and packaged into boxes that are labeled to indicate the package date and "best-used-by" date of the meals. At the end of the event, the Stop Hunger Now transports meals back to its warehouse to await shipment abroad.

Volunteers will serve one-and-a-half and two-hour shifts between 6:30 a.m. and 9:00 p.m. each day to package the meals. Some shifts will include childcare. Additional “power hours,” (7 to 9 p.m. on Sunday and Monday) will offer volunteers, high school age and older, the opportunity to help with the large project.

Estes says, “Our combined resources, both in volunteers and financially, will result in a tremendous accomplishment for the fight against hunger.”

She adds, “Last year’s volunteers’ assembly program at Canterbury was an amazing success, resulting in just under 500,000 meals being packed, even in the midst of last year’s February snow and ice storm.”

The meals packed at Canterbury last year were delivered to the four schools of Robert Ford Orphanage in Haiti, and to the Philippines Convoy of Hope.

Organizers invite others who wish to volunteer for this year's event to sign up. There are still volunteer spots available on the following shifts.

All volunteers are asked to sign up in advance at www.CanterburyUMC.org/SHN.

Estes adds, “Vestavia Hills UMC will be doing a Stop Hunger Now campaign in April so we are book-ending Lent with feeding children!”

Stop Hunger Now is an international hunger relief agency that has been fulfilling its commitment to end hunger for more than 16 years. Since 1998, the organization has coordinated the distribution of food and other lifesaving aid to children and families in countries all over the world. Its meal packaging program was created in 2005.  This program has resulted in the packaging of more than 30-million meals by more than 100,000 volunteers in churches across America.

In appreciation for Canterbury’s five years of participating, during which they and their partners have packed 2 million meals -- more meals than any other church in the history of Stop Hunger Now, the founder of the organization Ray Buchanon will make a special presentation to the church on the afternoon of February 8.

During the 2014 North Alabama Annual Conference, volunteers packed 50,000 meals in one day working with Stop Hunger Now. Those meals were shipped to children in Belize. 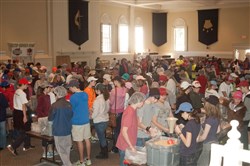