Black Heritage and the Methodist Church event to be Feb. 21 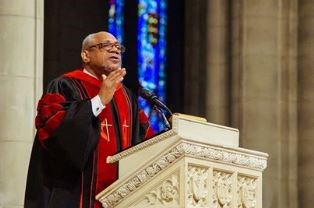 John Wesley “baptized his first black converts on November 29, 1758, and received them into the Methodist movement."1  Due to their evangelistic zeal, their owner also became converted and the three established the first Methodist chapel in West Indies and by 1786, there were 1,567 black and 2 white members.2

Black people were part of the formative stage of the Methodist Episcopal Church in America. At the 1784 Christmas Conference at Lovely Lane, Harry Hoosier and Richard Allen were present at the historic session.3 Black Heritage, like other groups, brings a unique gift to the life of the Methodist Church.

In light of the past and in hope of the future, North Alabama Conference Ethnic Ministries is hosting “Black Heritage and the Methodist Church” on February 21, 2015, at New Beginnings UMC in Birmingham, Alabama. The presenter is Dr. William B. McClain, author of Black People in the Methodist Church: Whither Thou Goest and a number of other books.

The seminar is free but pre-registration is required along with a donation of $5 for lunch.

Three aspects to the seminar are:

Originally from Gadsden, Alabama, Rev. Dr. McClain brings a wealth of experience and a rich gift to the subject of Black Heritage and the Methodist Church.  He conceived of and chaired the committee which produced the hymnbook, Songs of Zion, which sold more than 2.5 million copies. In 1999, he was named to the Mary Elizabeth McGehee Joyce Chair in Preaching and Worship at Wesley Theological Seminary, the first fully-endowed chair in the seminary’s history, where he taught preaching and worship for 34 years. He retired from the seminary on December 31, 2013, and is now Professor Emeritus.

Professor McClain met Dr. Martin Luther King, Jr., in Montgomery, Alabama, where Dr. King was pastoring and McClain was a teen-aged preacher in his hometown of Gadsden, Alabama. Called on frequently to lecture and preach in major pulpits and universities throughout this country and abroad, he has preached in Africa, Asia, the West Indies, New Zealand, and Europe. Dr. McClain also serves on the United Methodist General Commission on Archives and History.

The public is invited to attend. Please register online or contact Doris McCullers at dmccullers@umcna.org

Black Heritage and the Methodist Church event to be Feb. 21