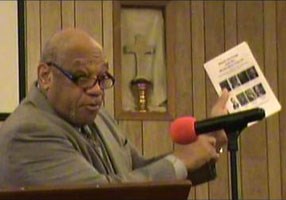 “Black Heritage and the Methodist Church” was a seminar sponsored by North Alabama Conference Ethnic Ministry in partnership with General Commission on Religion and Race (GCORR) through a grant for “Growing Diversity-Transforming the World.” The event was held at New Beginnings UMC in Birmingham on Saturday, February 21, 2015.

Participants at the event, who were from various ethnic and racial backgrounds, were thrilled at the teaching and dialogue at the seminar.

Originally from Gadsden, Alabama, Dr. McClain offers a wealth of experience regarding the subject of Black Heritage and the Methodist Church.  He conceived of and chaired the committee that produced the hymnbook Songs of Zion, which sold more than 2.5 million copies. In 1999, he was named to the Mary Elizabeth McGehee Joyce Chair in Preaching and Worship at Wesley Theological Seminary, the first fully-endowed chair in the seminary’s history, where he taught preaching and worship for 34 years. He retired from the seminary on December 31, 2013, and is now Professor Emeritus. Professor McClain met Dr. Martin Luther King, Jr., in Montgomery, Alabama, where Dr. King was pastoring and McClain was a teen-aged preacher in his hometown of Gadsden, Alabama. Called on frequently to lecture and preach in major pulpits and universities throughout this country and abroad, he has preached in Africa, Asia, the West Indies, New Zealand, and Europe. Dr. McClain also serves on the United Methodist General Commission on Archives and History.

On the question, “What was the appeal of Methodism for African American?” Dr. McClain suggested the following:

Exploring the question: “Why have African Americans remained in the Methodist Church?” Dr. McClain shared the following:

Finally, in discussing the final question of “So now what?” Dr. McClain invited the United Methodist Church to live out its brand promise of “open hearts, open minds and open doors.”

At the close of the seminar, Dr. Richard Stryker, North Alabama Conference Executive Director of Ethnic Ministries, expressed appreciation to Dr. McClain for the presentation, to Dr. Clinton Hubbard and members of New Beginnings for being marvelous hosts, to the participants that were able to attend in spite of the weather and he gave recognition to GCORR for their partnership for the seminar. 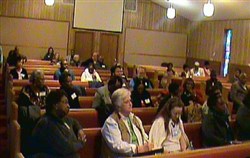 Participants at the event, who were from various ethnic and racial backgrounds, were thrilled at the teaching and dialogue at the seminar.