Week 5: Can't Get Around It 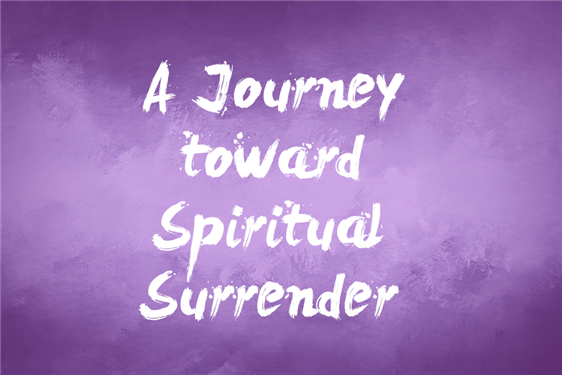 A Journey Toward Spiritual Surrender
Week 5: Can't Get Around It

While working on this reflection, I received a message from an old friend, asking me to call him. I’ve known him and his family for decades but we hadn’t talked in some time. Like too many people, our primary interaction is scattered social media posts. I’d seen him and his family posting about his mom, and I began to worry about her. When I called him, my fears were confirmed. Their mother was ill, and they were waiting for her time here to end. He and I reconnected as he shared the events of the last month or so that had led to this point -- complications from an old injury had led to other complications, and now the family was praying for comfort and peace, and seeking the best medical advice about how to gently let her go. And then, after we’d talked for a while, we took some time to just catch up with each other and melt the distance of time and space just a little bit.

A week later, just after Thanksgiving, she was gone. This amazing lady was the heart and backbone of her family and church. This beloved wife and mother had also come to be an anchor in the church I’d grown up in, started and led by my grandfather until his death. Her husband came as a pastor soon after that, during my teenage years, and stabilized this faltering church. After his death, she remained as one of those great women upon whom the church is built but whose importance is never lauded enough. At the end, she had served that community, pointing to Christ in word and deed, for three and a half decades.

She was the definition of a faithful servant, giving selflessly, asking nothing in return, and voicing no complaints, yet her life ended in pain with her family facing difficult decisions, anticipating loss, and then processing grief, all around a holiday that celebrates gratitude. We hear such a thing and don’t understand how it can be. We have our own experiences like that, with various circumstances and situations that bring darkness into our lives, and we wonder how can such suffering be a part of anything good? More immediately, how do we bear that darkness?

See, my servant will act wisely;
he will be raised and lifted up and highly exalted.
Just as there were many who were appalled at him—
his appearance was so disfigured beyond that of any human being
and his form marred beyond human likeness—
so he will sprinkle many nations,
and kings will shut their mouths because of him.
For what they were not told, they will see,
and what they have not heard, they will understand.
Who has believed our message
and to whom has the arm of the Lord been revealed?
He grew up before him like a tender shoot,
and like a root out of dry ground.
He had no beauty or majesty to attract us to him,
nothing in his appearance that we should desire him.
He was despised and rejected by mankind,
a man of suffering, and familiar with pain.
Like one from whom people hide their faces
he was despised, and we held him in low esteem.
Surely he took up our pain
and bore our suffering,
yet we considered him punished by God,
stricken by him, and afflicted.
But he was pierced for our transgressions,
he was crushed for our iniquities;
the punishment that brought us peace was on him,
and by his wounds we are healed.
We all, like sheep, have gone astray,
each of us has turned to our own way;
and the Lord has laid on him
the iniquity of us all.
He was oppressed and afflicted,
yet he did not open his mouth;
he was led like a lamb to the slaughter,
and as a sheep before its shearers is silent,
so he did not open his mouth.
By oppression and judgment he was taken away.
Yet who of his generation protested?
For he was cut off from the land of the living;
for the transgression of my people he was punished.

We come upon dark times, and there we are. Because this isn’t a physical journey, there is no way around the dark spot in the road, no alternate path, only the time that must pass. We’re not alone in such things. Many hundreds of years ago Isaiah wrote to the people of Israel about their suffering, about being conquered by a foreign empire, ripped from their homeland, and subjected to foreign domination. This was devastating to a people marked by God and set apart for God’s purpose, but now dominated and powerless in every way. The book of Isaiah is filled with metaphorical imagery, and he wrote in four places about a servant called to bring God’s justice to the earth. Instead of being welcomed, the servant is violently abused and broken, but is ultimately rewarded and lifted up by God. The last of those writings, in Isaiah 52 and 53, paint a vivid picture of the suffering servant’s pain, but also give glimpses of the deliverance to come.

This is a passage we often consider during Lent because it speaks to both suffering and deliverance. We usually prefer not to face darkness directly, but the meditations of Lent encourage us to do just that, to embrace it and sit with it. So we sit with this passage, a description of failure and rejection, of a person marred beyond human appearance, of someone stricken, afflicted, wounded, crushed, bruised, and oppressed. We come to this passage for darkness, but there’s almost too much to bear.

For most Christians this servant is an obvious prophecy of Christ himself. That feels quite unrelatable for us even if, as people with physical bodies, we sympathize with his suffering. How can we find ourselves in such a text? This is prophetic Hebrew poetry, and although that’s three strikes against our easy understanding, it encourages us to look at it from different angles, like holding a gem up to the light and turning it side to side. It’s a difficult passage to read: the tense shifts between future, past, and present, and the servant usually is an individual but sometimes seems to be a group. Different Jewish interpretations before and after the time of Christ saw the servant as some specific person from Israel’s past or a messiah yet to come. Some interpretations say the servant is the nation of Israel itself. There is room, I feel, to see ourselves here, especially in those times when everything seems to be against us, bringing those two questions to our mind: How can there be good in the darkness, and how can I bear it?

Reinterpretation is a great asset because it can give us a different outlook on our circumstances, on what surrounds us and what might come next. From John Wesley’s teachings, Methodists have gained a perspective on faith and tools for understanding our place with God, a way of holding our questions up to the light, turning them side to side, and considering them through the lenses of scripture, tradition, experience, and reason. You might see that we’ve used those lenses on this passage from Isaiah, and you might look again at the text while thinking about them. We may also consider our own times of darkness through those perspectives and pray for reinterpretation that brings light: Those two questions continue to stick. Where is the good in this, and how can I survive it? The  more immediate question of survival has a maddeningly simple answer: with help. Just as with any physical weight we’re made to bear, the answer is to lean on something that will support me. That might be prayer and reflection, supportive partners, counseling, or countless other things, depending on the nature of the problem and my resources.

The other question of “where is the good?” is much more difficult. Platitudes like “God doesn’t give you more than you can handle” aren’t very helpful. There may be some hidden blessing which makes the time of trouble more meaningful. We may find some purpose on the other side that gives meaning in hindsight. This might be a time of pause, where we’re able to step aside and refresh ourselves for the continuing journey and wherever it takes us next. And sometimes, dear friend, there seems to be no good at all, only loss, pain, or difficulty, and time that we bide until it passes. It’s then that I pray that my response gives meaning, that I can take the darkness and spend it for light in some way and continue the journey.

God, help us make the journey together, gain strength when the way is easy and light, and sustain each other when difficult and dark. Help us to see that what we can’t get around, we go through together, lifted up by the assurance that if we have each other and travel with Christ, there is no darkness without deliverance. Amen.

Week 5: Can't Get Around It