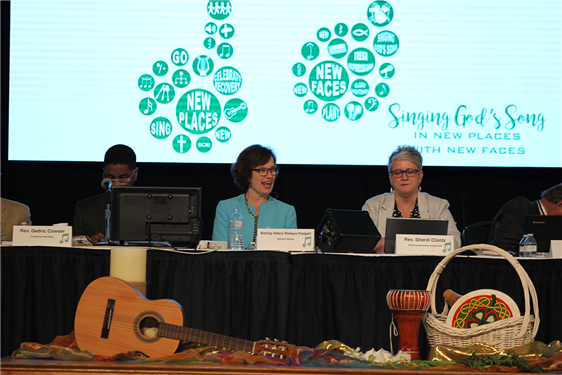 
The 2019 North Alabama Annual Conference gathered on June 2-4, 2019, at the Von Braun Center in Huntsville under the theme “Singing God’s Song in New Places with New Faces.” The Conference priority focus was New Faith Communities.

The Opening Celebration continued with music from a mass choir and a message from guest preacher Rev. Dr. Candace Lewis who serves as the District Superintendent of the Gulf Center Area of the Florida Annual Conference. During her message, Dr. Lewis asked the Conference, “Do we see people for who they really are or do we see them through our own biases?” She encouraged those gathered, “We have to be willing to extend a new invitation.”

The New Church Team presented this first of several presentations during which they shared stories of new congregations and fresh expressions throughout North Alabama. Executive Director of New Church Dr. Robin Scott introduced Rev. Chris Herbert who shared the story of Hope UMC in Albertville organized around the question “What would I/my Church do for the Kingdom of God if I/my Church knew we would not fail?” Hope UMC is a thriving new congregation that was created when two congregations that were barely surviving dared to work together to create something new in order to reach their community.

Bishop Debra Wallace-Padgett then led Conference members and visitors through a Baptismal Remembrance as members prepared for their work together over the next two days. 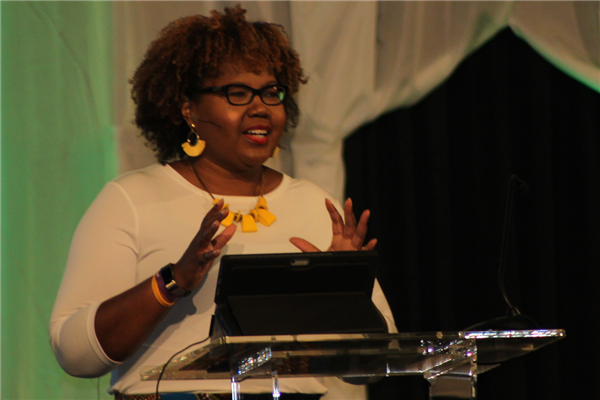 Monday morning began with the Conference hearing from special guest Rev. Dr. Candace Lewis. Dr. Lewis, a former church planter and former Executive Director of Path1 New Church Starts at Discipleship Ministries, focused on the Conference theme of “New Places with New Faces” and shared current religious trends impacting congregations. She stated, “We have work to do if we are going to continue to share our faith. We want to make sure we are sharing that with the next generation.” Explaining how people’s connection with the church is changing she asked, “How much space does your church have on someone’s home screen of their phone?” She then encouraged North Alabama United Methodists to seek those new places to welcome new people by reminding them, “Church can happen anywhere!”

As the Conference moved into business, the first report was from the United Methodist Children’s Home who announced that Huntsville First UMC was the new North Alabama “Guardian of the Bell.” Each year, UMCH recognizes a church in the North Alabama Conference and the Alabama-West Florida Conference that demonstrates superior support for its mission with this honor.

Rev. Woody Woodin presented the report from the Upper Sand Mountain Parish which is celebrating 50 years of ministry on Sand Mountain.

For the first time, North Alabama Conference members used electronic voting devices to cast votes. As the business continued, members took a moment to learn how to use their voting devices and conducted practice votes.

Before voting began Rev. Stephanie Arnold and Rev. Vaughn Stafford took a moment of personal privilege to share that even though they had many theological differences, they had covenanted to be respectful of each other. They then extended an invitation to all of Conference to also take up this covenant of respect, especially as business was conducted.

The New Church Team then presented its next story which featured Rev. Joshua Allison sharing about a fresh expression of Houston Memorial UMC — a new service on the shore of Smith Lake called Worship on the Water.

The Conference then began a highly anticipated portion of its business – the election of clergy and lay delegates to the 2020 General Conference and 2020 Southeastern Jurisdictional Conference. 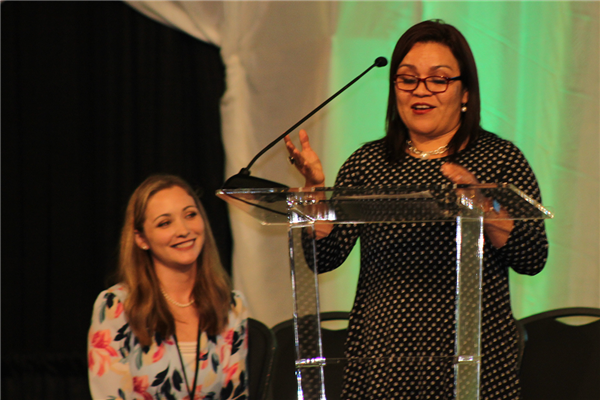 The COSROW report was presented by Rev. Kelsey Grissom. She highlighted the advocacy work of COSROW and announced the nominees for the Louise Branscomb Barrier Breaker Award: Stephanie Arnold, Dave Barnhart, Sandra Locke-Godbey, Lucy Morales and Dorothy Ann Webster. She introduced Rev. Lucy Morales as the 2019 recipient. Rev. Morales is an associate pastor of Trinity UMC in Huntsville and serves as the Conference Hispanic-Latino Ministries Strategist. She shared her story with the Conference as she received this annual award.

Brant Sanders, chair of the Board of Pension and Health Benefits, then joined Scott Selman, who also serves as Conference Director of Administrative Services and Benefits Officer, on stage to present the Board's report. All the Board’s reports were approved. This included the recommendation of the premium rates for 2020: Individual insurance $782/month; Dependent insurance $782/month; Family Total $1,564/month. This is 5.7% higher than the 2019 premium rates, and include a $42 monthly increase for both individual and dependent coverage. An additional $379,000 will be required from the health insurance reserve fund to fully pay for the cost of health insurance in 2020.

Birmingham-Southern College President Daniel Coleman greeted the Conference and offered a blessing over lunch. The Conference then broke for a late lunch. 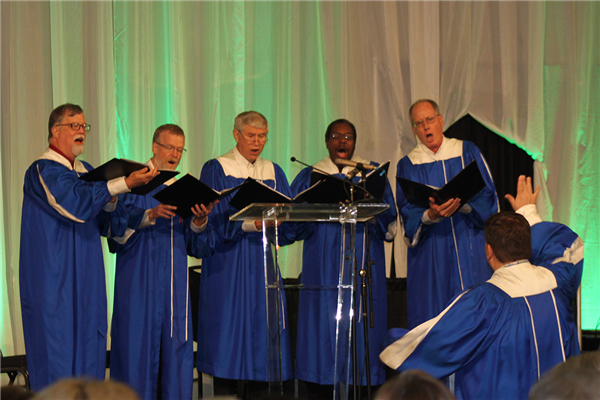 Monday afternoon began with the Memorial Service during which clergy and clergy spouses who have died in the last year were remembered. Rev. Ken Dunivant was the preacher for the service offering a sermon entitled “The Cloud.” The Hazel Green UMC Men’s Ensemble presented special music during the service. Bishop Wallace-Padgett lead those gathered in a Service of Holy Communion as they remembered the great cloud of witnesses. The names of those being remembered were read during the service and a bell chimed for each one. They included the following:  After an ice cream break sponsored by Educational Opportunities, the Conference once again gathered to conduct business. 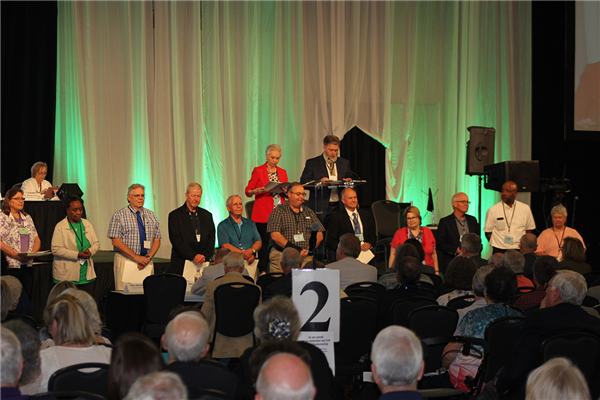 The report also included the traditional passing of the Bible, during which a retiring clergy presents a Bible to a member of the Ordination class. Rev. Gary Formby presented the Bible to Rev. Holly Woodall.

The Board took a moment for a special recognition of Rev. Walter Cash who retired as Director of the Alabama Course of Study School after 24 years of service.

On Monday evening, Conference members, family and friends gathered at Trinity UMC for the Service of Ordination, Commissioning, and Licensing. 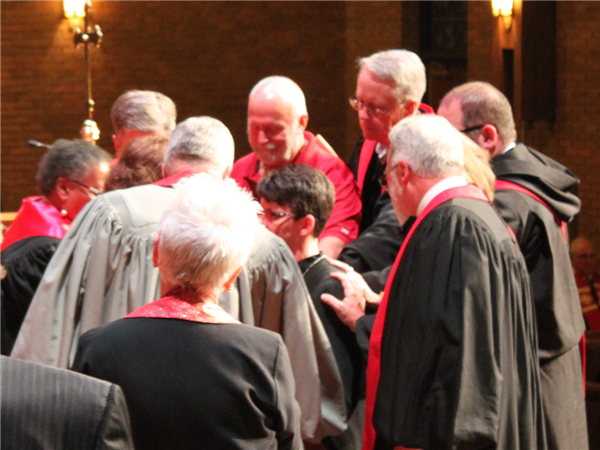 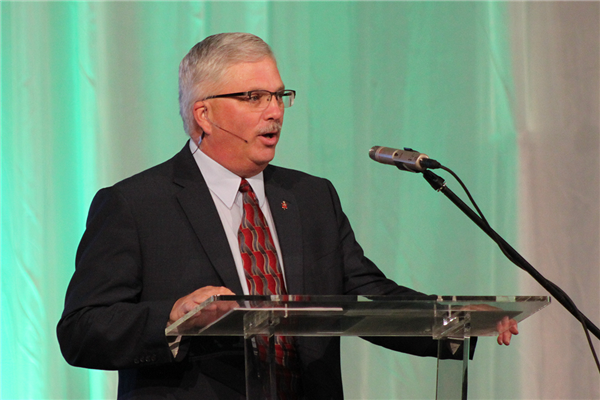 Tuesday morning opened with worship and a message from guest Bishop Bob Farr of the Missouri Annual Conference. He told the Conference, “We have forgotten how to disciple anybody we don’t already know.” He told those present we must be more diverse and more missional. He noted that missional would mean, “You are discipling, mentoring and investing in somebody you didn’t know this time last year.” He also taught about the changing mission field and encouraged those gathered that “You have to learn to connect with people before you offer any invitation.” He added, “This is not about church growth. This is about bringing people to Jesus Christ. You focus on bringing people to Jesus Christ, your church will be fine.”

After some technical difficulty with the voting handsets during a clergy ballot, the Conference heard once again from the New Church Team. This time they shared the story of Rev. David Barnhart and St. Junia UMC, a network of house churches who is seeking to reach the “nones and dones” who do not want to attend a traditional church. The presentation addressed the question “Can this be done without God?”

Rev. Dr. George Cobb then presented the report of the Commission on Archives and History reminding the Conference that the roots of Methodism in Alabama began more than 200 years ago. He also announced that Frankie Hayes and Jane Landers of Saint Mark UMC in Birmingham are the 2019 co-recipients of the Glynn and Annie Ford Wheeler Award.

Rev. Emily Chastain presented the Leadership Development report highlighting a yet-to-be-named event for children’s and youth leaders to happen in the spring of 2020.

The Conference returned to voting for delegates to the 2020 Southeastern Jurisdictional Conference. The clergy cast five more ballots. Sherri Reynolds was elected on ballot #8; Tiwirai Kufarimai on ballot #9; Vaughn Stafford on ballot #11 and Mary Henley on ballot #12.

Rev. Kelly Clem, Secretary of the Cabinet then presented the Property Resolutions and announced the five closing churches. They included the following: Johnny Frazier presented the Statistician Report and Steve Lyles presented the annual Laity Address. 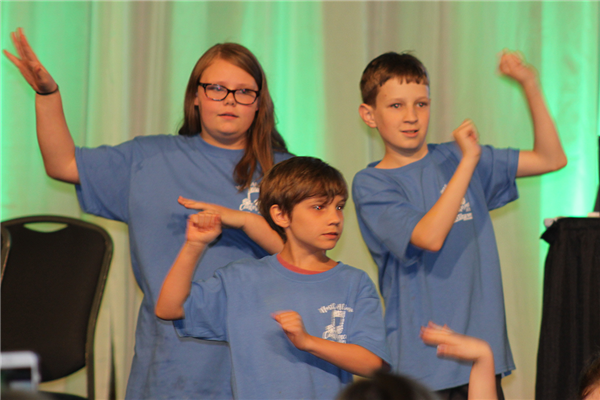 Following lunch, the Kids Camp participants called the Conference back to order with a song.

Rev. Dr. Wade Langer presented the report of the Board of Higher Education and Campus Ministry. As he walked on stage to present the report, Bishop Wallace-Padgett announced he was the recipient of the Francis Asbury Award which is given by the General Board of Higher Education and Campus Ministry. The award recognizes and encourages the support of higher education and collegiate ministries in The United Methodist Church by recognizing an individual who has made a significant contribution to fostering the church’s ministries in higher education at the local, district, or annual conference level of the church. The award is named for Bishop Asbury and is based on his admonition to the people called Methodist to erect a school in the vicinity of every church. Rev. Langer then told the story of the newest campus ministry in North Alabama. The ministry is on the campus of Samford University in Birmingham and was the result of three passionate students who sought to start something new to connect with their peers. 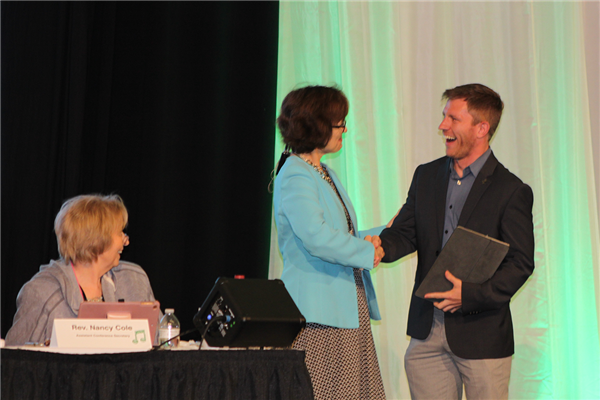 Rev. Dr. Andy Wolfe and Allan Robertson presented the report from Sumatanga by sharing memories of their individual times at camp and by encouraging individuals and congregations to continue to invest in the camp.

The Conference then moved to a time to consider the Petition and Resolutions submitted this year. The agenda included one petition and eight resolutions.

As the afternoon concluded, the Conference heard the final New Church team report which told the story of Jenny Grizzard and Oxford UMC who started ESOL classes. The presentation focused on the question Am I / my church being faithful with the gifts I / my Church have been given?

The Conference ended the afternoon with Closing Worship. The Service began with the Fixing of Appointments. The Conference also Commissioned the 2020 General Conference and Southeastern Jurisdictional Conference Delegation which includes the following: 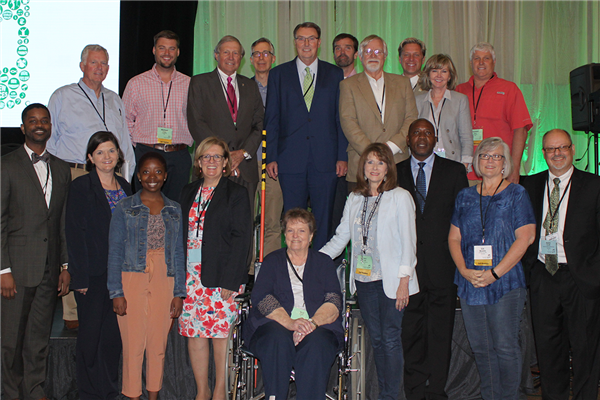 Bishop Bob Farr preached the message “No Fear.” He noted the discord and fear that was apparent in the day’s business and the overall feeling of the United Methodist Church currently. He assured the Conference, “God does God’s best work when we are down on our knees.” He also said, “Fear is not of God. All fear does is separate divide and scare each other. God’s design is for wholeness.” He reminded the Conference “Going on to perfection is becoming fully formed in love.”

As worship concluded, the Conference accepted an invitation from Northeast District Superintendent Rev. Tom Parrish to once again meet in Huntsville in 2020. The 2020 Annual Conference will be May 31- June 2.

Bishop Wallace-Padgett offered a benediction and the Conference was adjourned.
comments powered by Disqus