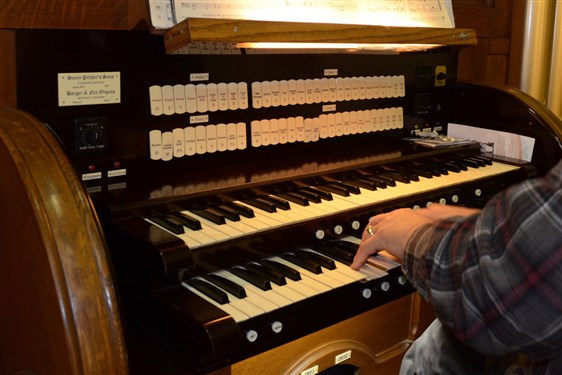 By Justin McCullers
The Clay Times-Journal – reposted with permission


The First United Methodist Church of Ashland has been in the same building since 1909. It was the first brick church in the county. It was built using bricks made locally at a brickyard between Ashland and Lineville. The building itself cost $10,000 dollars and was built by contractors from Roanoke. The “Art Glass”, stained glass windows, were brought to the church by means of the old railroad that ran through the city. They were paid for by the women and children of the church growing a cotton field and selling the cotton to raise money. While the church was being built, worship services were held in the courthouse.

One of the most noted attributes of the church is the beautiful pipe organ. The church purchased the organ in 1917 for $3600, half of which was paid through a grant from the Andrew Carnegie Foundation. The value of the organ in today’s standards is $450,000.

The organ was built in Kentucky and shipped to the church, where it was constructed. It originally consisted of 396 pipes and was the only such instrument to ever be in Clay County. The preacher’s wife, whose name was unavailable, played the organ for the first two years of its use. Mary Lucy Owens Sanders followed her and played the organ for 4 years. Jessie Mae Sims Runyan succeeded her and held the job for over 30 years until Winnie Adams took over in 1952. Adams played the organ until current Organist Tim Runyan took over in 1987.

Mr. Runyan was born October 6, 1937. He began playing the organ as a teenager and played at the church for the first time when he was either 16 or 17. After high school, Tim moved off to college and majored in Economics. He also joined the army and was the Chaplain’s Assistant, playing for five services each Sunday. After his service, he went to work for the Federal Government in Washington D.C. and eventually wound up in Atlanta, Georgia where he worked from 1965-1987. While living in Atlanta, he had the opportunity to play the organ at several different churches.  For two years, he played at Trinity Methodist Church, which was directly across from the Capitol in Atlanta. He also played at many weddings and various other events during this time. He said he had lost track of how many weddings he played for, but remembered he played his first in 1956 and played his last wedding about three years ago, which is a span of well over 50 years.

When he moved back to Clay County in 1987, he picked back up playing the organ in Ashland where it all began. Tim takes pride in the instrument he plays and was very generous to show his skills on it. In 2004, the organ was rebuilt and expanded to increase the amount of pipes to 823. The organ can play a wide variety of sounds from strings to bass and even to trumpet. The keyboard has 61 notes, which is two octaves less than a piano. It has 24 pistons, pre-settings for different pieces that allow a musician to move quickly from one piece to another, on each of 10 memory levels which add up to 240 settings that can be used. Twenty-three pipes are visible and the rest are in a room behind the organ. The sound from these pipes can be increase or decreased by the opening or closing of louvers in the wall. The organ chimes also have the ability to switch into the sound system and be broadcast through the outer speaker tower for the call to service. This allows for the music to be brought into the downtown of Ashland on Sunday mornings.

Tim is the only current member of the church who is able to play the organ. It is impossible to comprehend the beauty of the sight or sound of this instrument without seeing or hearing it in person. This style of music is an art that is slowly fading away. Tim Runyan and The First United Methodist Church of Ashland are keeping this tradition alive and for that they are truly Unsung Heroes. 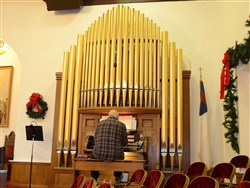