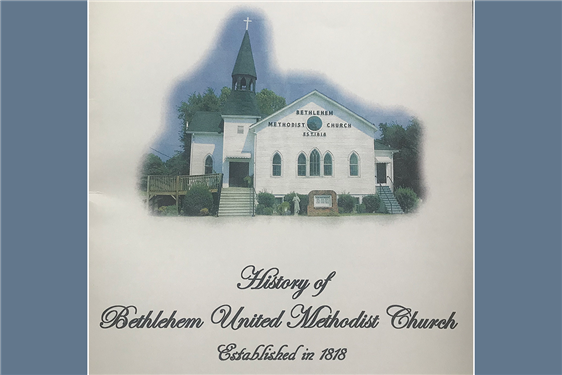 On Sunday, May 20, 2018, Bethlehem United Methodist Church in Hueytown (Central District) will celebrate 200 years in ministry.

The bicentennial Homecoming Celebration will begin at 10 a.m. North Alabama Conference Bishop Debra Wallace-Padgett will preach at 10:30 a.m. followed by music by the Dulcimer Group and a fellowship buffet dinner.

The day will be time to praise, sing hymns and give thanks for the legacy of Bethlehem UMC, as well as, move forward with the church’s vision of “Love God Supremely, Love One Another, and Reach Out to Those Who Need Us.”

The planning committee has done impressive work to prepare for the occasion, including producing the book History of Bethlehem United Methodist Church, Established in 1818 which provides a history of the church and cemetery, tells the story of early church patriarchs and offers a glimpse of both past and current traditions and activities within the life of the congregation.

Described by one historian as “the cradle of Methodism in Jefferson County,” Bethlehem UMC was founded by Ebenezer Hearn in the last half of 1818, before Alabama became a state.  It was established in an area of the Alabama Territory which pioneers named “Possum Valley” which was near a water source called “Rutledge Springs.”

By the next year, a large meeting hall was built to serve as a regular place of worship on land donated by the church’s first pastor James Rutledge. Today, the church building is still located on the original site.  Unlike other churches established in that era, the building has never burned down nor moved.  Some of the original architecture is a part of the current structure.

The church’s history book notes that as far back as the late 1800s, the church has often been called “Old Bethlehem Church.” The congregation appreciates its historic status. The book concludes, “Many, many decades have passed, but time has not defeated us these generations later.  Indeed, God has given us His blessings plentifully, in bounty and abundance. So, it is to Him we give all our appreciation, glory, and praise! Amen.”

Today, the congregation remains focused on ministry and invites those looking for a church home to join them for worship any Sunday morning and those seeking fellowship to take part in a delicious free meal at noon every Wednesday.

The congregation invites everyone to join them on May 20 for their Bicentennial Celebration. The church is located at 1491 Allison-Bonnett Memorial Drive, Hueytown, AL 35023.