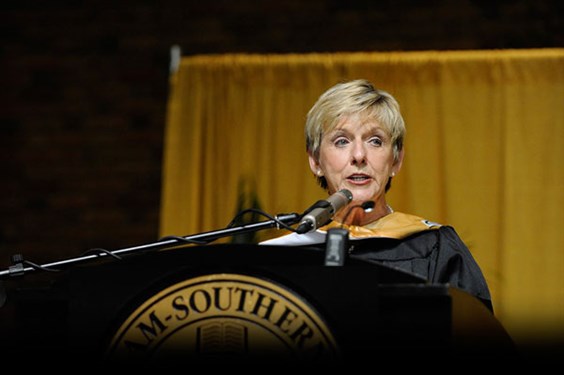 The Board of Trustees of Birmingham-Southern College is pleased to announce that Linda Flaherty-Goldsmith, BSC’s former Chief of Staff, has been named the 15th president in the college’s 160-year history. The current president, Dr. Edward F. Leonard III, is vacating the position.

Flaherty-Goldsmith, who will officially take office July 11, brings many years of senior leadership experience in higher education, having served as Vice President for Finance and Administration for the University of Alabama at Birmingham, Vice Chancellor for Financial Affairs for the University of Alabama System, and Vice President and Chief Operating Officer for the University of Connecticut. She began working for Birmingham-Southern College as a consultant to the Board in 2010. After Gen. Charles C. Krulak was appointed the college’s 13th president, she transitioned to the role of Chief of Staff. She served in that position until May of 2013.

In 2013, the Birmingham-Southern College faculty awarded her the honorary degree of Doctorate of Humane Letters. Since 2013, Flaherty-Goldsmith has worked as a pro bono consultant with Human Rights First, a non-profit, nonpartisan human rights organization based in Washington, D.C., and New York, to create, implement, and advance an international campaign designed to disrupt the business of human trafficking. In this role, she has been a part of an effort to promote at the national level legislation addressing social issues and challenges that face higher education and society in general.

“We are extraordinarily grateful that Linda is returning to lead the college and provide a seamless transition,” said outgoing BSC Board Chair Bruce Rogers. “She is absolutely the best person to take on this role. She is financially savvy and brings a proven track record in higher education. Linda also has been a champion of Birmingham-Southern and she has a love of our city and deep roots in our community.”

Rogers expressed appreciation for Dr. Leonard’s service to the college. “We are grateful for the positive impact he had on BSC, and we wish him and his family all the best,” Rogers said.

“Linda brings a deep understanding of Birmingham-Southern and higher education in general, especially the complex financial management behind delivering quality education to young people,” said longtime BSC Board member, former chair, and community and business leader Jim Stephens, who is Chair of the Board for EBSCO Industries. “I have every confidence that Linda will guide BSC and its excellent leadership team to the next level while maintaining the college’s high academic standards.”

Incoming BSC Board Chair David Smith, an alumnus and a three-time BSC parent, welcomed Flaherty-Goldsmith on behalf of the entire BSC Family.

“Our community has such a deep sense of history, commitment, and dedication to the school,” he said. “We’re incredibly fortunate to have someone with such impressive credentials lead the college forward, especially at a time when BSC is thriving. The students will benefit enormously from her leadership.”

The college, founded in 1856, recently re-focused its longstanding commitment to experiential learning in a liberal arts context, pledging to make every opportunity available for students to apply their classroom knowledge to the real world, whether through travel, internships, research, or service. In the past academic year, BSC welcomed its third-largest class of incoming students and launched the Krulak Institute for Leadership, Experiential Learning, and Civic Engagement.

“Birmingham-Southern is one of the finest liberal arts colleges in the Southeast, and I am honored to have been chosen to provide the leadership the college deserves,” Flaherty-Goldsmith said. “BSC is appropriately designated as a ‘College that Changes Lives’ because it changes the lives of all its constituents, not just its students. Although I spent only three years at Birmingham-Southern, it captured a big piece of my heart. The college has great faculty, staff, and students, and I am excited to be given the opportunity to work alongside these talented individuals toward expanded horizons.”