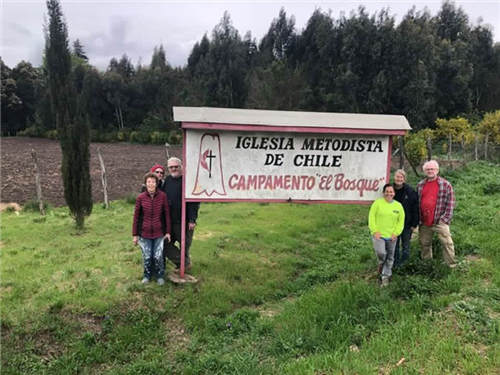 Bluff Park UMC has supported missionary Rev. John Elmore’s work in Chile since 2007. One of about 65 United Methodist Churches throughout the U.S. that support him as Covenant Churches, we honor his work with three commitments:

John Elmore has done missionary work in Iquique, Arica, Talca, El Vergel and Angol (where he currently works). He is originally from Virginia but spent years in Tuscaloosa where he has strong ties with Forest Lake UMC. He met his wife, Cristina, while he was serving in northern Chile (her family lives in Arica). She is an English teacher in a secondary school and speaks fluent English.

John was called to mission work when he was about 40 after spending years working in construction. His background allows him to ably supervise and work alongside mission teams doing construction work. He also sings, plays guitar and is a major part of the musical and liturgical programs at one of the three Methodist churches in Angol. 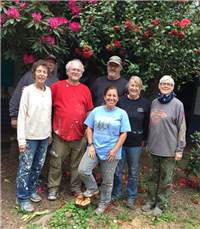 Bluff Park UMC has sent mission teams to Chile to work with John in the various towns where he has served since the Covenant Church relationship was established. John's assignment in Angol is to renovate and revitalize the only Methodist camp in Chile. It will be used for spiritual retreats, youth camps, and church meetings. The rustic camp consists of bedrooms facing an indoor courtyard, a dining hall, and bathrooms. Outside are small, separate outdoor worship areas set among giant sequoias which have grown from seeds missionaries brought from California. The camp is also an easy walk to the Malleco River. One of John's visions is to develop ecological studies at the camp, incorporating hikes to the river and study of local vegetation.

In September 2019, the Bluff Park mission team to Chile painted all the bedrooms, repurposed old bunk beds into nightstands, painted out-buildings and fences, and landscaped the grounds. Due to COVID-19, the next work team to Chile will be scheduled when it is safe to do so.

The United Methodist missionary in Chile, John Elmore, and his wife Cristina send greetings from Angol, Chile, a city which until recently was under a strict governmental lockdown to slow COVID-19. Fortunately, Cristina's parents, from Arica in far northern Chile, were visiting when the lockdown was announced.

John follows Bluff Park UMC's livestream services and uses his Methodist hymnal to sing along. One of the ads he is seeing on Chilean TV is "separamos pero conectamos"—separated but connected—a true feeling for our global community now.

As a U.S. Citizen, John received a $1,200 stimulus check. Since he can’t use the money to stimulate the U.S. economy, he and Cristina decided to purchase food staples for local families in need. They packaged the foods for each family and included a Spanish-language Upper Room Devotional Book. This is another way that John and Cristina are making a difference in their community. Please pray for John, his family, and our friends throughout Chile.
Discover, Develop and Deploy Spiritual Leaders to Make Disciples of Jesus Christ for the Transformation of the World.