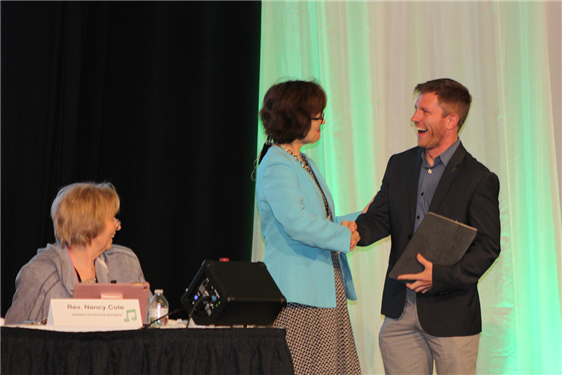 During the 2019 North Alabama Annual Conference in June, Conference Director of Campus Ministries Dr. Wade Langer presented the report of the Conference Board of Higher Education and Ministry. As the report began, Bishop Debra Wallace-Padgett surprised Rev. Langer by announcing he was North Alabama’s recipient of the 2019 Francis Asbury Award.

The Francis Asbury Award is awarded annually to one honoree per annual conference and recognizes individuals who have made a significant contribution to fostering United Methodist ministries in higher education at the local, district or annual conference level. The award is named for early American Methodist Bishop Francis Asbury and reflects his call to establish a school in the vicinity of every church. “We must,” he said, “ … give the key of knowledge to your children, and those of the poor in the vicinity of your small towns and villages.”

After receiving the award, Langer shared about the current work of the Conference Board of Higher Education and Campus Ministry.

He noted one major focus of the Board over the last year has been to create a set of metrics to evaluate the Conference’s work on college campuses. The metrics include tracking attendance, service/outreach, fellowship, small groups, and overall reach to the campus.

“The good news is that our influence, just in the short time of using these metrics, has grown on every campus — which is super exciting for us," he reported.

He then shared the story of the Conference’s newest campus ministry at Samford University.  This new Wesley Foundation began with three students who wanted to start the new ministry on Samford’s campus. Langer highlighted the students’ passion and hard work to gather resources and overcome obstacles to start the ministry. The Samford Wesley Foundation began in the fall of 2018 with the original three students and within the first semester had grown to 25 students.

“Samford Wesley was not on our radar as a Board of Higher Education and Campus Ministry,” Langer said. “We were working on other locations in this conference. However, Jesus got a hold of three students. They were not ordained. They were not licensed. They were not professionally trained, but they were passionate about Jesus and they saw a need on their campus and they set out to solve it.”

He then encouraged the Conference by concluding that this story not only applies to campus ministry but potentially to all ministry saying,  “The start of Samford Wesley reminds me that the future of the church and its ability to reach a world in need will not be done by bureaucrats or ordained folks, like me. Instead, it’s going to be done by movements of God’s spirit that occur when the Holy Spirit empowers laity to do ministry.”

Watch the video below to see the complete Board of Higher Education and Campus Ministry Report.