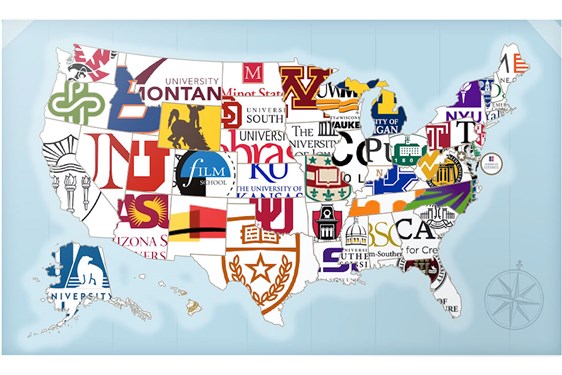 Birmingham-Southern College has been ranked No. 1 in Alabama by ICX Media in its first annual ranking of top U.S. film schools in each state.

The college was featured in a Top 50 list along with such institutions as the University of Southern California, NYU, and Yale University. Schools were chosen based on their overall ratings, reputation, notable alumni, internship opportunities, faculty accomplishment, and more.

“I am thrilled that our college has been recognized along with some of the country’s premier film programs,” said Dr. Teddy Champion, visiting assistant professor of media and film studies at BSC. “This is a great acknowledgement of our students’ talent and creative work.”

The college’s Media and Film Studies major, which launched in 2010, currently has 30 declared majors, most of whom are studying film production and film criticism.

The program is interdisciplinary and draws on a variety of methodological approaches from varying subjects and from faculty in multiple departments and diverse fields, so students get more than just an education in film. The program’s newest faculty members, Champion and Robert Corna, visiting instructor of media and film studies at BSC, have graduate degrees from two of the finest film schools in the country—the University of Southern California and Columbia University.

Not all the learning happens inside the classroom either. In January, professors take students to the Sundance Film Festival in Park City, Utah, where they get a backstage look at independent film production. MFS students also attend and intern for Birmingham’s annual Sidewalk Film Festival as well as production companies in Los Angeles and Europe.