Flaherty-Goldsmith announced in August that this would be her last academic year at Birmingham-Southern College. Health issues that arose in the intervening weeks forced her to accelerate her departure, she said.

“I am making this decision with deep sadness and after much internal soul searching,” she said. “I have loved this college since first joining the BSC family in 2010, and I have been grateful for the opportunity to lead this great institution even briefly. I have total confidence in the team and all of BSC’s supporters, and know that Birmingham-Southern will continue to be Birmingham’s beacon for the liberal arts.”

BSC Provost Dr. Bradley J. Caskey has been named interim president. Caskey came to BSC as provost in 2017 after more than three decades of service at the University of Wisconsin-River Falls. Most recently, he was dean of the College of Arts and Sciences there, overseeing 16 academic departments and interdisciplinary programs that include 2,200 students and more than 200 faculty and staff. Caskey had previously served as associate and interim dean and chair of the psychology department. BSC Associate Provost Dr. Tim Smith will serve as interim provost.

“During this time of transition, I look forward to working with those on campus and beyond to keep our current initiatives moving in a positive direction and to identify and implement new actions designed to increase the impact of a BSC education,” Caskey said. “We have a superb team in place and I am confident that we will meet the challenge of our motto, ‘Forward, Ever!’”

Denson N. Franklin III, chair of BSC’s Board of Trustees, also said the transition would be smooth.

“We are fortunate to have someone with such a dedication to students and understanding of higher education here to step into this role,” Franklin said. “And we are thankful to Linda for all that she and her team have accomplished to position BSC for future success. She has been an enormous asset to the college and the community.”

Franklin is chairing an Executive Transition Committee, named last month, to lead the search for BSC’s next president. The committee includes representatives of the Board of Trustees, faculty, staff, students, and alumni.

Flaherty-Goldsmith first began working for Birmingham-Southern College as a consultant to the Board of Trustees in 2010, then transitioned to the role of chief of staff, a position she held until May 2013. In that time, she founded BSC’s Panther Partnerships mentoring program. 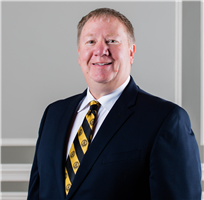