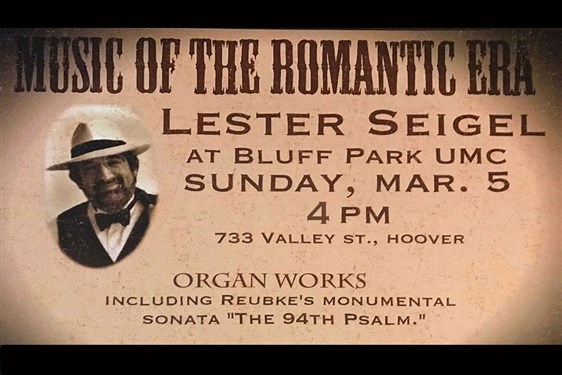 The annual Organ Concert at Bluff Park United Methodist Church on March 5, 2017, will showcase the talent and expertise of Dr. Lester Seigel, the Joseph Hugh Thomas Professor of Music at Birmingham-Southern College.

Dr. Seigel is an active conductor, teacher, and recitalist in chamber music and organ. Since 1993, he has been part a faculty member of BSC, leading the College's famed Concert Choir, Hilltop Singers and teaching a variety of other courses. In 1989 he began serving as the organist at Canterbury United Methodist Church in Mountain Brook and added the role of choirmaster in 1995. In addition to these two positions, he is conductor of Sursum Corda, an ensemble of nineteen professional vocalists, now in its tenth season. His work with these choirs has resulted in European appearances (with BSC); national tours (with Sursum Corda and BSC),including the national conference of American Choral Directors Association in Chicago; a solo performance by the BSC Choirs last year at Carnegie Hall; and many other regional and national venues including Washington National Cathedral, Lincoln Center, St. James' Cathedral in Chicago and others.

He is a published arranger with Oxford Press. On his last sabbatical he conducted research on Jewish music as a Jacob Rader Marcus Fellow at the American Jewish Archives in Cincinnati. Dr. Seigel is married to Jane Sisson Seigel (who grew up at Bluff Park UMC). He has three married children and six grandchildren.

The March 5 recital was specifically selected for the Moller organ at Bluff Park UMC and will feature selections from the Romantic era including works by Johannes Brahms, Camille Saint-Saëns, César Franck, Julius Reubke, and Dudley Buck.

The recital will begin at 4 p.m. Everyone is invited and admission is free. Bluff Park UMC is located at 733 Valley St, Hoover, AL 35226.