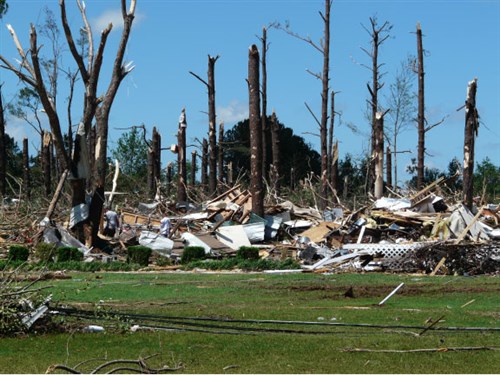 Some dates stand out in memory as markers in our lives. April 27, 2011, is one of those dates for people all over North Alabama as a series of devastating tornadoes swept the state, leaving a path of death and destruction and changing lives forever.

Two separate waves of tornado activity made the day a long one, with multiple counties suffering major damage from straight-line winds and numerous strong tornadoes, including an EF-5 in Hackleburg. The official numbers are staggering: 64 tornadoes resulted in 254 deaths and more than 20,000 homes destroyed. Property damages landed somewhere near $1.5 billion. One of the most deadly twisters, a nasty mile-and-a-half wide EF-4 with winds of 190 miles per hour, stayed on the ground for 80 miles from Tuscaloosa to Birmingham. An estimated 12 percent of the city of Tuscaloosa was destroyed by that tornado, the city with the most deaths at 54.

Before the end of that week, the North Alabama Conference was responding. In very short order a call center had been created, staffed by volunteers from local churches. Calls poured in, some offering assistance and others expressing need.

"My job at the Annual Conference began on April 4, 2011, but April 27 clarified roles for me and for many here at the Methodist Center," said Linda Holland, Director of Connectional Ministries. "In those first few days of assessing the loss, damage and immense tragedy, we asked God to gather people with the gifts and abilities to help us serve our churches and communities through the 'long haul' of response and recovery. The team District Superintendent Bob Alford and Rev. Nancy Cole formed were gifted far beyond our prayers and expectations. Their compassion, efficiency and collaboration with other service agencies have blessed countless individuals and families over the past five years."

Serving for the long haul

Lori Feist was one of the first volunteers to show up when the Conference sent out the call. Her gifts for organization and logistics were put to use immediately. Feist served as Volunteer Coordinator, sending local and out-of-state teams to work sites and scheduling repairs and rebuilds with homeowners. Teri Butler served the Conference as a Case Manager, making sure that the needs of each disaster victim were being met with the proper services.

Working with then - Disaster Recovery Information Coordinator Emily Chastain, Call Center Coordinator Sara Bryant, and scores of volunteers, Feist and Butler began the work that would take years to complete. Chastain and Bryant have since moved on to other staff positions in the North Alabama Conference.

Now, four and a half years later, the Conference is prepared to officially cease work on the storms of April 27, 2011. The work of these final two who served in the response and recovery office of this disaster will be celebrated at a luncheon with Conference staff on November 19, 2015, their last official day.

"We want to express our sincere appreciation to all who served in storm response and recovery, but are especially thankful for individuals like Rev. Nancy Cole, Lori Feist, Teri Butler and Emily Chastain," said Holland.

As Feist and Butler reflect on their time serving the Conference in this capacity, they realized that the relationships formed will last the rest of their lives. "I really enjoyed getting to know the people," said Feist. "We had people who volunteered long term—months, even a whole year. I know about their families. I know their dogs' names."

Individuals and teams poured into the area. NOMADS, a United Methodist volunteer organization made up of retirees who show up in RVs, signed up for specifics stretches of time. Many individuals came to Alabama for weeks at a time, at their own expense, to help in the work of rebuilding. Conferences from all around the country sent ERT teams. Camp Coker (Coker UMC's transformed Family Life Center) housed workers. Additional local churches also outfitted their facilities to house volunteers with help from District Offices.

As one might imagine, stories abound. One of the people helped was a true hoarder whose house couldn't be repaired until it was cleared. He asked for help to "patch a few holes," which turned into a major project. Before the holes could be patched, the house needed rewiring. During rewiring, plumbing problems were discovered. Each job led to more problems being discovered—the house needed new studs and joists, a water heater had to be replaced, the furnace didn't work, a sump pump was needed. "What started as a patched roof and ceiling turned into an entire remodel," said Feist. "We ended up gutting the house."

"And we had trouble with him even letting us in the house," Butler added. "He didn't want us to see the inside. We had to convince him to let us clear it out." Butler and Feist laughed as they told how every morning, workers found items they had put in the dumpster the day before back in the house.

As Feist and Butler reminisced about their work, they laughed about chasing a bird escaped from its cage, recalled threatening dogs biting electricians and gave thanks for amazing husband-and-wife teams. But they agreed that perhaps the most memorable person they helped was Earcy, the last person for whom the team built a home.

Earcy had lived in the same house all his life, and he didn't leave it after it was all but destroyed on April 27, 2011. A Jefferson County Sheriff's Deputy found Earcy in his damaged home and continued to check on him for two years after the storm. When the media got wind of it, it was aired as a human interest story on a local TV station. "Someone saw Earcy on TV, and gave Nancy a heads-up," said Feist.

The Disaster Recovery Team went to work on Earcy's home. "One section of one room was all that was habitable," said Butler. "Earcy had applied to FEMA and been turned down. Not knowing he could reapply, he just gave up."

"We encountered so many obstacles when we started work on Earcy's home," continued Feist. "We had to clear liens. We had to purchase an adjoining lot to gain the access we needed. Deeds had to be cleared. Land had to be cleared. It was a major undertaking to say the least."

With help from the Jefferson County Sheriff's Department, an attorney working pro bono, and the Disaster Recovery Team, Earcy did get a new home right in the same spot he had always lived. The Sheriff's Deputy who had helped Earcy to begin with stuck with him through the whole process. "A utility pole was stolen during the construction," said Cole. "But the Sheriff's Department got right on the case. It was returned, and it was made known that nothing else was to be touched. And nothing else was."

The story doesn't end there. When they heard Earcy walked or biked many miles to his job in all kinds of weather, a ministry group at Vestavia Hills UMC provided him with a reliable used vehicle. When he lost his job, the Sheriff's Department hired Earcy as a cook in the jail. "Helping Earcy was a true community effort," said Rev. Cole.

Reflecting on the four and a half years of recovery work, Rev. Cole offers gratitude for the generosity of United Methodists throughout the world which came in in the form of United Methodist Committee on Relief (UMCOR) grants. She also offers thanksgiving for the additional amount North Alabama churches and districts contributed in the form of direct response to the needs of survivors, as well as relief kits and other supplies distributed through the Disaster Warehouse. She says, “The total dollar amount is really incalculable for us because we had no way to track all that was being given and spent. It was an amazing outpouring!”

As their recovery work wound down, Rev. Cole discovered that money still remained from the $2.87 million in grants awarded to the Conference from UMCOR. Since that money couldn't be returned, Cole was advised by Greg Forrester, Assistant General Secretary of Disaster Response for UMCOR, to invest the remaining funds in residential storm shelters. Feist and Butler have spent the last few weeks overseeing the placement of 91 storm shelters across North Alabama.

"We are grateful for these women were still there when others had moved on," said Bishop Debra Wallace-Padgett. "They made a lasting impact on the lives of those they served." 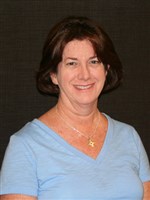 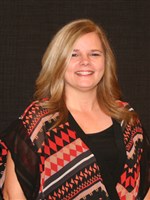