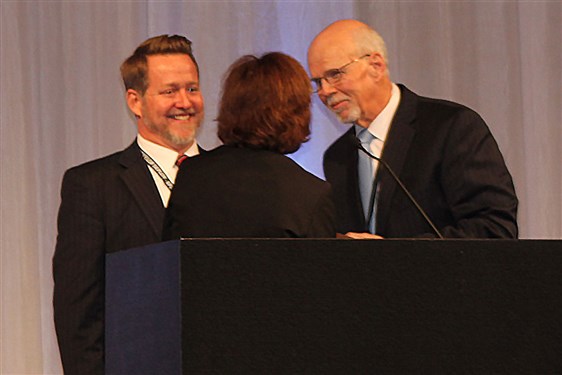 The youth winner was Tamya DeWitt. She is an 11 year old member of Brownsville UMC (Cheaha District). Rev. Leon Kennedy, pastor of Brownsville from June 2014- June 2017, nominated her for this recognition. In the nomination he shares, “Tamya DeWitt was born blind. But now praise God she can see! Virtually every Sunday, during our Children’s Moment, Tamya has something to contribute! Her contributions consist of her making a verbal presentation or singing a song of praise. When she finishes, the congregation is awestruck! She inspires and evangelizes. She affirms her faith and confirms our own. I cannot help but believe that her sight was miraculously restored for this very purpose.”

Watch a video of Tamya’s story below.

This year’s clergy winner was Rev. Terry Bentley, senior pastor of Guntersville First UMC (Mountain Lakes District). He was nominated by District Superintendent Robin Scott. In his nomination, Rev. Scott shares, “In the last three years Guntersville First has had 134 professions of faith. These have occurred through various outreach efforts. Pastor Bentley has consistently, for forty years now, had professions of faith where he has served. I cannot think of a more deserving recipient.”

Watch a video of Terry’s story below.

This year’s lay winner was Stephen Stroud, Director Of Student Ministries and Recreation at Tuscaloosa First UMC (Southwest District). He was nominated by Tuscaloosa First UMC Senior Pastor Ken Dunivant. In the nomination Rev. Dunivant shares, “Stephen loves students. He cares about them and their issues. He reflects the very character of Jesus in this love. He believes that Jesus cares about the lives of students. He seeks to share the love, care, forgiveness and meaning that he has found in Jesus with the students.”

Watch a video of Stephen’s story below.

Clergy, laity and youth are eligible for this award and please note a primary indicator of this award is the fact that it showcases professions of faith. Neither the size of the local church, the age or gender of the nominee, nor the length of their service will limit eligibility. Nominations for the award open in February or March of each year at www.umcna.org/denman.