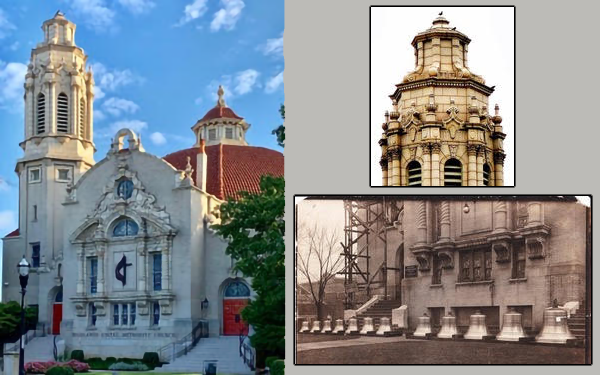 December 24, 2021, will mark the 100th anniversary of the dedication of the McCoy Bell Tower and bells of Highlands United Church (Central District), located at Five Points South in Birmingham. The McCoy Bells have rung out over the Southside community continually since 1921.

A Christmas Eve Bell Concert will take place at 3 p.m. on December 24 and will feature a selection of ten traditional carols played at the dedication one hundred years ago.  All in attendance will receive a small bell ornament to commemorate the occasion.

The McCoy Bell Tower and the thirteen bronze bells were an anonymous gift to the church following the 1918 Influenza Pandemic. They were given in memory of Bishop James Henry McCoy (1868-1919), the church’s first pastor. He later served as President of Birmingham College (now Birmingham-Southern College) and was elected Bishop in the Methodist Episcopal Church South. Additionally, at one time he was the editor of the Alabama Christian Advocate.

The bell tower was designed by Birmingham Architect Bem Price and constructed by Smallman-Brice Construction Company. The thirteen bells were cast and are still maintained by the McShane Bell Foundry of Baltimore, Maryland. Each bell was cast with a Bible verse.

In 1994 the bells were electrified to be rung each day automatically. They chime portions of the Westminster Chime each quarter-hour and play the full chime on the hour during the day. On Sundays, the bells are rung manually before and after worship. Throughout the year, the bells peal for weddings and other celebrations and toll for funerals.  Members of the Highlands UMC congregations recently pealed the bells each night at 8 p.m. during the height of the COVID-19 pandemic in honor of the medical community and frontline workers.