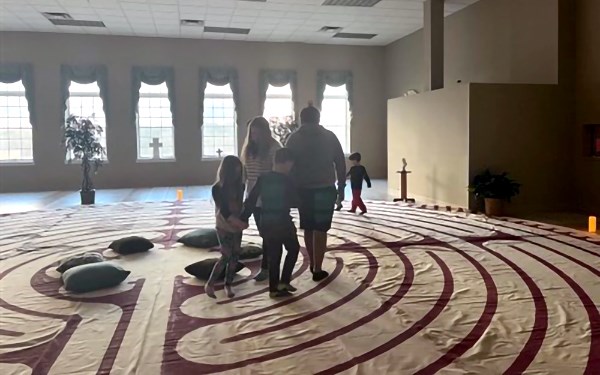 Recently, Hamilton United Methodist Church borrowed the labyrinth from the North Alabama Conference Adult Discipleship Team, and I felt it was my responsibility to present this tool for worship in a manner relatable to our children and youth. I began by meeting with the youth group prior to the arrival of the labyrinth and explaining the history behind labyrinths and the use of them. Next, I tasked them with coming in the day the labyrinth would arrive to prepare the area for the labyrinth. I explained the importance in preparing the area, not only for the people that would be using it, but also for the presence of God.

The youth and a few adults removed all the tables and chairs from our fellowship hall, swept and mopped the floors, and helped lay out the labyrinth. We set up a decorated altar at the front entrance of the labyrinth. I then encourage the youth to decorate around the labyrinth with any articles that they felt would be meaningful for anyone that would be walking the labyrinth. They set up crosses, sculptures, plants, a crown of thorns, and battery-powered candles strategically around the outer edges of the labyrinth. Other objects similar in nature were placed throughout the area by the youth.

The next morning, I brought the youth and the children’s groups together to bless the labyrinth. I began by explaining to the children that long ago, around 350 AD, Christians in a place called Algeria spoke of using a labyrinth. We have no idea how long before that they were used, but we know the idea carried on with Christians up to today—nearly 1700 years later, we are still using them.

The labyrinth is not a maze. There is one entrance point, one path to follow to the center. In the center, we spend time with God, letting Him recenter our lives for Him. When we feel at peace and are ready to take that positivity that God has given us, we then exit by following the same path in reverse. Walking the labyrinth is a slow, quiet, meditative process that attends to the desire to make a journey toward God. It is a way to embody prayer, to keep it from being imaginary or a non-emotional thought in our minds, to let our whole selves be attentive to God. It is a way to set aside time to pray and to be with God: to put down our phones, to have conversation with God, and to be alone in prayer. There is not one way or another to pray with the labyrinth. Not one right prayer or speed of walking. So, all we need to do is walk and pray.

We all gathered around the labyrinth and handed out the words for the blessings to the youth and kids and blessed the labyrinth for everyone’s use. The children then returned to Sunday school and the youth were allowed to be the first to walk and experience it on their own. When all had a turn, I asked them how they felt after using it. They answered with singular words such as calm, peaceful, or happy (great responses for teenagers who usually don’t respond or only respond with grunts and shrugs).

The following Wednesday night we set up for the children to walk. Thinking about children’s attention spans and abilities to follow instructions (much better than adults), I separated them into groups of three with a youth leader. One group at a time would enter the labyrinth, all holding hands. The youth leader in front set the pace for the small groups. I waited until each group made it to the center and got sat down; then I would meet them. I asked them how they felt, what did they notice, was it difficult, and did they enjoy it. Their answers were so inspiring. One girl said she tried not to step on the red lines because she felt that would it be more pleasing to God. Others said they felt so calm. One little boy said he felt like he was able to pray for his father who has cancer and that he really felt like God was listening. I then asked if anyone wanted to pray. We had a few young volunteers that did and if not, I prayed for them. At the end, the youth leader would lead the group out of the labyrinth.

The labyrinth was a true blessing to have. I encourage all who partake in this tool for prayer to find a way to incorporate your youth and children. Teaching them at a young age the different ways to pray, the importance of service by including them in preparing, showing them how to bless, and about being a part of a blessing are so important in their development into spiritual warriors for God.