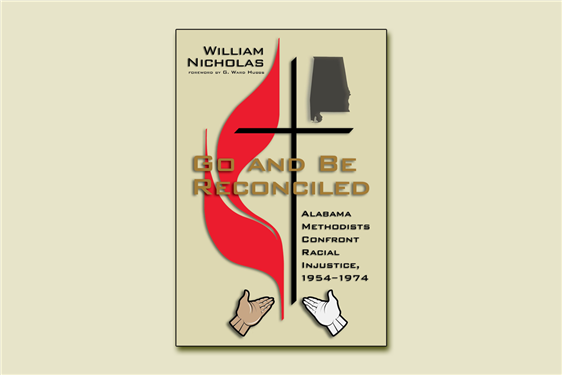 The book is now available from Cokesbury and Amazon.

A UMNS story by Sam Hodges

Meanwhile, Alabama Methodists faced their own integration struggle, one that paralleled and occasionally intersected with the epic events swirling around.

It’s a tale with a hero, Bishop W. Kenneth Goodson (1912-1991), who unlike his cautious predecessors went right at the challenge of merging long segregated conferences within the state.

“I couldn’t have developed a thesis without Goodson,” Nicholas said. “He made such an extraordinary difference in the whole way the issue of integration was handled.”

The 1939 merger that created the Methodist Church also enforced segregation through a new Central Jurisdiction, composed of all-black conferences. Alabama had one — the Central Alabama Conference — as well as the essentially all-white North Alabama and Alabama-West Florida conferences.

With the Supreme Court’s 1954 Brown vs. Board of Education decision, declaring “separate but equal” schools unconstitutional, Southern resistance to integration intensified. And it was in that environment, which included Cold War politics, that the Methodist Church began to move toward dismantling its own segregation policy.

As Nicholas notes, Alabama had at least a handful of progressive white Methodist pastors in the 1950s. There was a state chapter of Methodist Federation for Social Action.

But it would disband after being attacked as communist by, among others, the denominational newspaper Alabama Christian Advocate. Some individual pastors who spoke for civil rights, such as the Rev. Daniel Whitsett of Sylacauga First Methodist, would have crosses burned in their yards by the resurgent Ku Klux Klan.

“You could get run out of the state,” Nicholas said.

Indeed, Whitsett ended up leaving Alabama for a church appointment in Cambridge, Massachusetts. The Rev. Andrew Turnipseed moved on to Rochester, New York. Marti Turnipseed, his daughter, was asked to leave Birmingham-Southern after joining a lunch counter desegregation sit-in. (Nicholas earlier told her story in an article for The Alabama Review.)

Alabama Methodists included arch-segregationists Gov. George C. Wallace, state Ku Klux Klan leader Bobby Shelton and Birmingham public safety commissioner Eugene “Bull” Connor. The Rev. John Rutland recalled trying to preach for reconciliation, only to have Connor, one of his parishioners at Birmingham’s Woodlawn Methodist Church, stand up in the pews and shout him down.

White Citizens’ Councils emerged across the South as an anti-integration vehicle for those who considered the Ku Klux Klan too violent and low-class. In Alabama, what Nicholas describes as a Methodist counterpart formed, organized by the Rev. G. Stanley Frazer. This was the Association of Methodist Ministers and Laymen, aimed at thwarting integration of the conferences.

When ministers’ enthusiasm for that effort proved insufficient, a grouped called the Methodist Layman’s Union took up the cause. It pushed its own slate of delegates to General Conference and backed a bill in the state legislature that would give churches an escape route from the trust clause if the national church forced integration.

But in 1964, Goodson arrived to oversee both the North Alabama and Alabama-West Florida conferences. He represented a clear change from his predecessors, Bishops Bachman Hodge and Nolan Harmon.

“They really tried to walk the fine line and resist controversy,” Nicholas said. “Then Goodson came in and changed all that.”

Young for a bishop at age 51, the North Carolinian had plenty of energy and, as Nicholas describes, remarkable skills as a preacher and overall communicator.

He went on a charm offensive, visiting church after church and starting “The Bishop’s Hour” radio program, which proved so popular it moved to local TV stations. He also began to move the conferences toward integration, dealing much more directly with the issue in his rhetoric, and appointing younger, more receptive pastors as district superintendents.

On March 7, 1965, Goodson was in Selma for the dedication of a new church. While he was speaking, the “Bloody Sunday” attack by state troopers on voting rights marchers trying to cross the Edmund Pettus Bridge occurred just a few blocks away from the church.

Goodson recognized the magnitude of the event and quickly arranged a Methodist-to-Methodist meeting with Gov. Wallace. Wallace had been adamant about keeping the bridge closed to demonstrators, but now asked Goodson for advice.

“I would open that bridge,” Goodson said, as Nicholas relates in the book. “You have forces ready for any trouble.”

Whether or not Goodson’s counsel was the reason, Wallace did open the bridge and allow the protesters’ march to continue. Goodson also responded to “Bloody Sunday” with a pastoral letter that he had read from pulpits on April 4, 1965. In it, he asked Methodists to commit themselves to the “elimination of those injustices that bar any of our people from full participation in all rights of citizenship.”

“The superintendent was so moved that he could not speak; someone else had to pray over the food,” Nicholas writes.

The 1968 merger of the Methodist Church with the Evangelical United Brethren Church formed The United Methodist Church and forced integration on the Southern conferences. But there was flexibility in the timetable, and local votes were still required.

At its 1971 gathering, with Goodson presiding, the North Alabama Conference approved merger by a vote of 429 to 428. A year later the Alabama-West Conference gave its approval by a two-to-one margin.

One measure of the respect Goodson had across the denomination was his election as president of the new Commission on Religion and Race. But in 1972, he would be reassigned to the Richmond Area in Virginia. His successor in Alabama, Bishop Carl J. Sanders, let the momentum for racial reconciliation and power-sharing subside, Nicholas writes.

Still, Nicholas believes Goodson’s accomplishments were remarkable and would have been built upon had he remained in Alabama another term.

Nicholas bases that on both the written record and the oral history interviews that were crucial to his book.

“The memories of Goodson have come down along the lines of someone who was just really a miracle worker,” he said.

Hodges is a Dallas-based writer for United Methodist News Service