The Church at Stone River charters and celebrates continuing growth 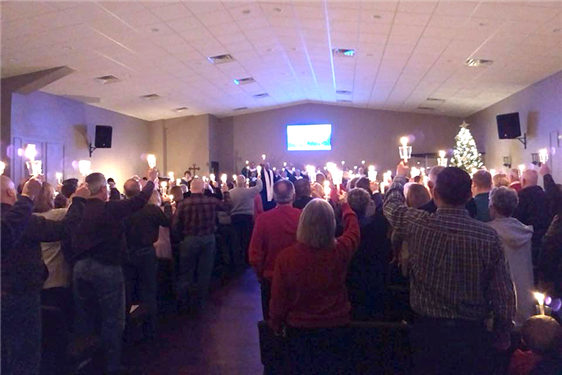 
In July 2017, a new church in Decatur, The Church at Stone River, was formed as members from two closing churches, St. Luke UMC and Ninth Street UMC, came together with a seed team of members from Austinville UMC and two new pastors.

Less than a year later, the average worship attendance for this new congregation is 356 worshippers each week. On Christmas Eve the church celebrated a worship attendance of 577. Each week the sanctuary is filled to capacity and they now have four weekly worship services.

During Advent, Lead Pastor Rev. Ted Amey and Pastor of Discipleship Rev. Amy Howard led the congregation to invite and equip 248 adults to become founding members as the church start chartered as an official United Methodist congregation. The breakdown of membership includes 72 people from St. Luke UMC, 74 people from Ninth Street UMC, 24 people from Austinville UMC and 78 people who previously had no church home or transferred from another congregation.

Northwest District Superintendent Kelly Clem says, "The pastors are outstanding, and many people and efforts can be credited with this great success story, but the deepest truth in my mind is the way that the faithful community has been able to get on board with the vision the spiritual leaders have projected for a new kind of church in Decatur, Alabama."

Last July, Austinville UMC also received a new pastor, Rev. Jeff Sellers. Rev. Clem adds, "Jeff has brought revitalization to that church as well and in spite of losing a number of members to The Church at Stone River, they have maintained their over-100 average worship attendance."