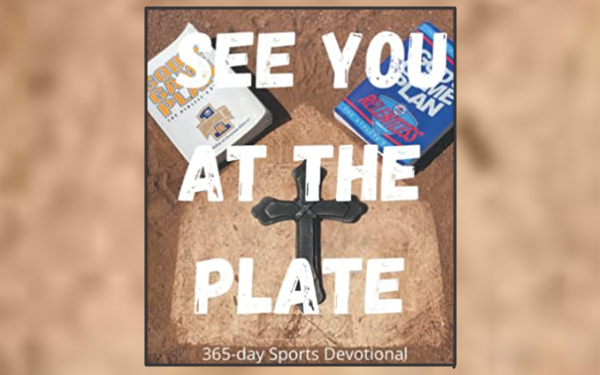 Since early in his ministry, Rev. Steve Strange has made room for witnessing through sports. Through the years he's been in ministry he has coached, served as team chaplain, worked with the Fellowship of Christian Athletes and participated in sports events himself as a means of sharing the Gospel message. "Sports saved my life and led me into the ministry," he writes in the introduction to his devotional book See You at the Plate. "I have gotten to do some cool things, and almost all of them have come out of the context of sports."

See You at the Plate is a 365-day devotional book based on the lessons he has learned and shared through participating in sports. He has amassed material from the time he was just a boy. "I have always loved sports," he says. "I played every sport I could as a child. Whiffle ball was my favorite." As he grew up, Rev. Strange played football and ran track in high school, and was part of a college team at Campbellsville University from 1987-1991 that was recently inducted into the school's Athletics Hall of Fame. From there, it was coaching his kids' Little League teams and working with local high school teams in the cities where he has served churches. Most recently, he was the chaplain for Huffman High School athletics. He was able to gift every player on Huffman's football team who wanted one with a copy of his book at Christmas.

Using messages he wrote and shared through the many years he has been active in participating in and serving sports organizations, Rev. Strange, who currently serves as senior pastor of Trussville First UMC (Cheaha District), spent more than six years organizing the book into 365 separate devotionals. They are not dated, so the reader can start using them at any point during the year. "I wanted it to be easy for anyone to use," he said. "So you don't have to wait until January 1 to start the book. Just start when you're ready."

Another interesting facet of See You at the Plate is that it uses 365 different Scripture passages as the basis for the lessons. Some days have additional Scripture references. There are also 365 names for God shared within the devotionals. Readers are encouraged to use these names for God for prayer and journaling. "Each day, there's a prayer written by me," said Rev. Strange. "Some are written in first person so they can be recited by the reader."

While readers can start with lesson one and read one each day in order, the devotionals are also titled according to the topic. That way, "if you are struggling with something or something catches your eye, you can go to that day," Rev. Stange said. "I write like I read, though," he says with a laugh. "The grammar won't be perfect."

Rev. Strange stressed that this was not a money-making venture. He published the book to share what he has learned through the years. All proceeds are donated to mission-related organizations. Through sales of nearly 1,000 copies since publication in late 2021, proceeds have benefitted two groups. Never Thirst, a group that digs wells to provide clean water to communities, received the first donation. The second gift was a scholarship for Megamissions, a group that builds churches, performs medical missions and goes into prisons in Mexico.

Interested readers can obtain a copy of See You at the Plate by contacting Trussville First UMC at 205-655-3259, or order copies from amazon.com. Amazon has printed copies, or you can get a free copy for your Kindle reader.