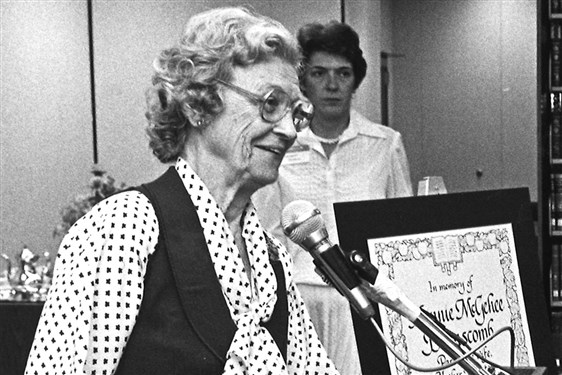 
Nominations are now open for the 2017 Louise Branscomb Barrier Breaker Award. Each year the Conference Commission on the Status and Role of Women (COSROW) recognizes a United Methodist “barrier breaker" willing to risk and stand up for the rights of women and ethnic minority persons. This year’s nomination deadline is March 31, 2017.

The Branscomb Barrier Breaker award was established in 1990 by the United Methodist Women of the North Alabama Conference. Dr. Louise Branscomb was the first recipient. She was one of the first female physicians to practice in Birmingham, Alabama. She also was an active lay person in the United Methodist Church and served in leadership roles at all levels of the church. She was a charter member of the General Commission on the Status and Role of Women and served on this commission of the general church from 1973 to 1982.

Rev. Ted Leach was the person who nominated Dr. Branscomb for the first Barrier Breaker Award, and also suggested the award be named in her honor. In the video below, Rev. Leach shares some of his memories of Dr. Branscomb. The video is part of a project the North Alabama COSROW has begun to capture and preserve the stories of past Branscomb Barrier Breaker Award recipients. During each week in March, a video featuring a past recipient will be posted on the North Alabama Conference website.

The 2017 award will be presented at the annual COSROW breakfast and the recipient recognized during Annual Conference on Tuesday, June 6 at the Von Braun Center in Huntsville.

Click here to nominate someone for the 2017 Branscomb Barrier Breaker Award. The nomination deadline is March 31.