Pastor’s email ministry develops into a book of daily devotionals 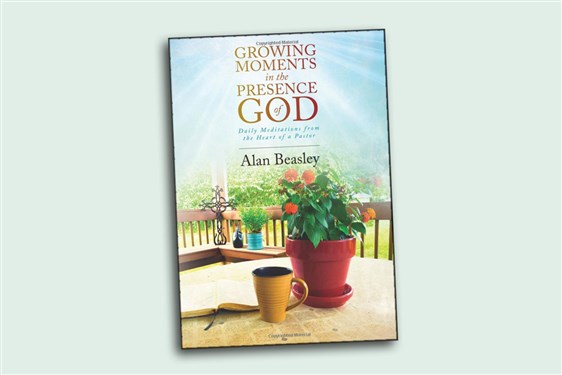 Fifteen years ago, Rev. Alan Beasley began a daily email devotional ministry as a way to connect with members of his church. Each day he used email to pass along a devotional written by other pastors, authors and church leaders. Occasionally, Rev. Beasley would be prompted by a specific event and write the day’s devotional himself.

He explains, “My goal was to give people one minute of Jesus each morning, a quick dose of daily inspiration.”

In November 2013 that abruptly changed. At that time God called him from being a “devotional middleman” to being the author of each one he sent.

He explains, “During a rare season of God clearing speaking into my life I realized He was leading me to a new place in life. While in New York during November 2013, leading a United Methodist District event, I was arrogantly thanking God my ministry in Alabama was not as difficult as New York. He quickly convicted me people in my ministry context were just as lost and hurting as the people in New York. This led to a sermon I preached at that event and that eventually God led me to preach at the North Alabama Conference in 2014.”

A year later, in November 2014, God spoke to his heart again and told him to publish a book of 366 devotions. Although he once again argued with God, Rev. Beasley saw this as a confirmation of what many people who received his email devotionals had urged him to do.

Then in February 2015, God opened a door. There was a member of Alan’s DISCIPLE Bible Study group whose daughter had published a book and could guide him through the publishing process. So over the next six months he created enough original material to complete the book Growing Moments in the Presence of God: Daily Meditations from the Heart of a Pastor.

In the introduction of the book Rev. Beasley writes the following:

The devotions you will read are probably like no others. There is no advance planning. I do not know what I am going to write when I sit down at my desk each morning. They are quirky, many times grammatically incorrect, relate to a specific event I may or may not reference, repeat a scripture previously used, and are written like I talk or think. At times you will have to use your best creative imagination to grasp the context especially if I reference a day, date or event. You are reading me just being me, simply from the heart as the Lord prompts me to write.

The 366 devotionals are dated and organized to follow the sequence of the Christian year. Each day’s devotion includes a scripture verse, meditation and prayer. There is also a space for the reader to journal his or her “Growing Moments.”

The book is available on Amazon, and the websites of most major booksellers. There is a Kindle version available.

“God has blessed the book to the point I am now able to give copies to many people who cannot afford to pay. From the beginning this project has worked on the principle that anyone donating $15 for a book pays for one and provides one for someone who can’t pay,” Rev. Beasley explains.

He adds, “I’ve not sold one book. I only provide an opportunity for people to donate. I am realizing no income from the book. Any money I receive is purchasing additional books or covering other expenses related to the book itself.”

Pastor’s email ministry develops into a book of daily devotionals