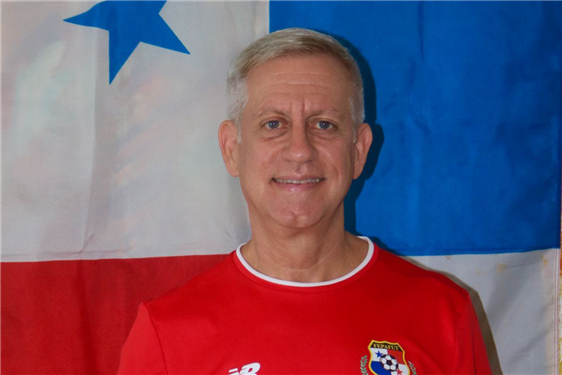 Below is his latest newsletter describing his work over the last year.

For more information about Rhett, his ministry and how you and your congregation can support his work click here.

March 7, 2020: The Canterbury Med Team arrived for a week-long mission to Cienaguita.

March 8: We had a joyful worship service at La Resurrección. Though no COVID cases had been reported yet in Alabama or Panama at that time, we had finally broken the habit of greeting with hugs and kisses. Afterwards, Chalino drove us to Chiriquí in the big blue bus. 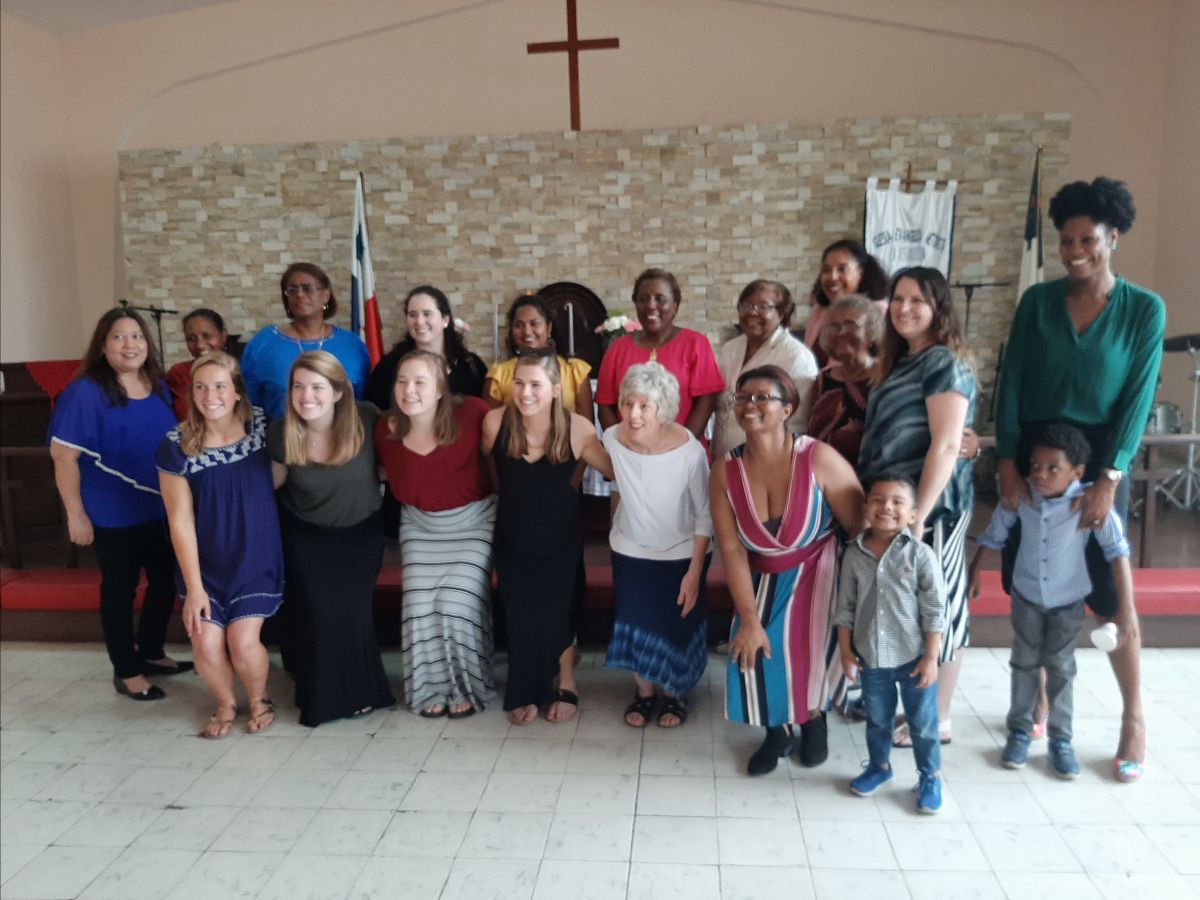 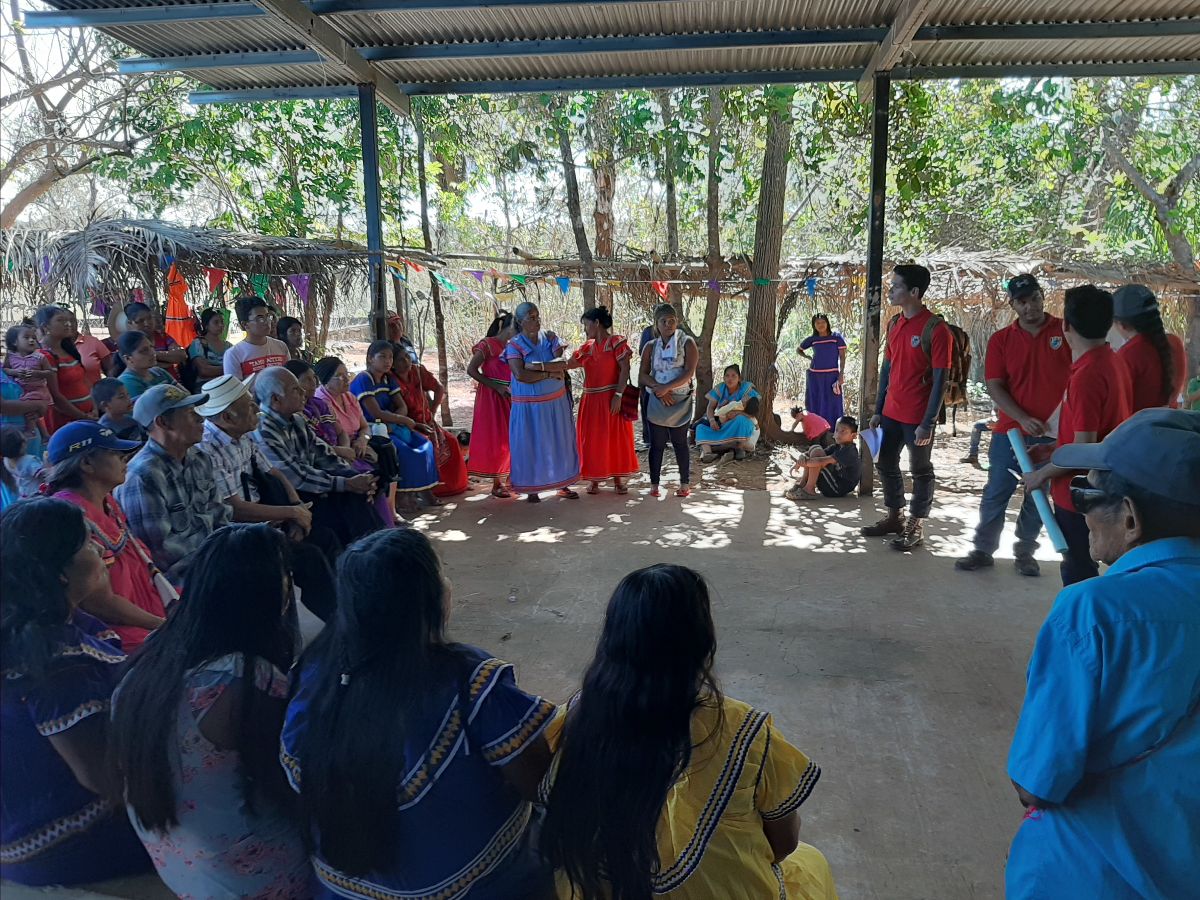 March 9: We had an exceptionally large number of patients the first day of the clinic. At dinner that evening, we heard that the first case of COVID had been reported in Panama City. I think that Alabama also had its first COVID case that same day.

March 10: Another big crowd at the clinic. We gave an orientation about COVID to folks as they waited to be seen by the docs. 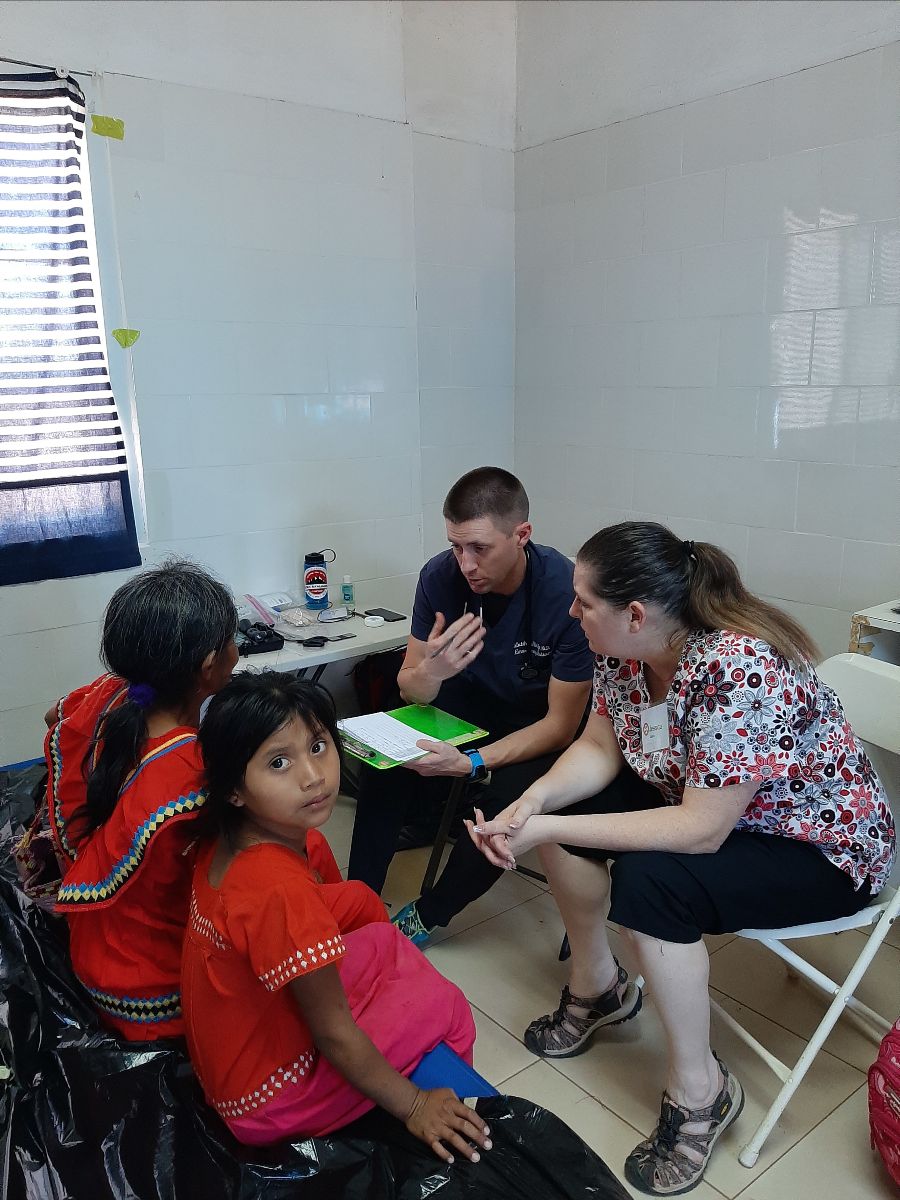 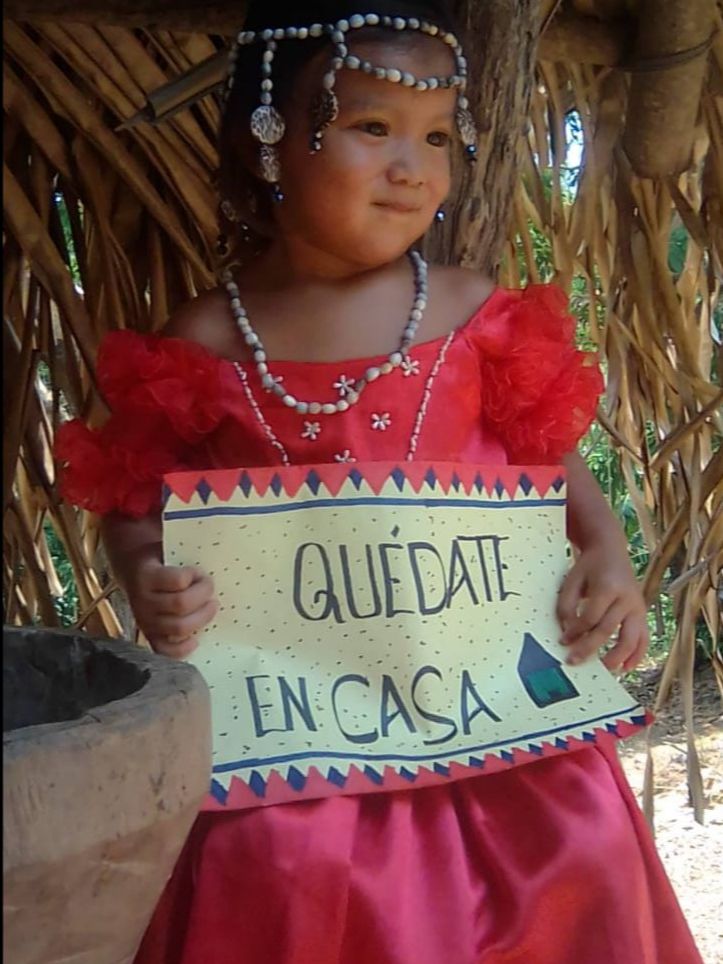 March 11: In early afternoon we got word that the national health system had gone into crisis mode. All large public gatherings were suspended, including the medical mission.

March 12: We made an early return to Panama City so that the team could fly out of Panama a day early. We still had no idea what was coming. Within a week, the Tocumen International Airport suspended all flights to and from Panama.

March 13: Our Child Development Center closed along with all public and private schools nationwide.

March 15: We held our last worship service in our sanctuary. 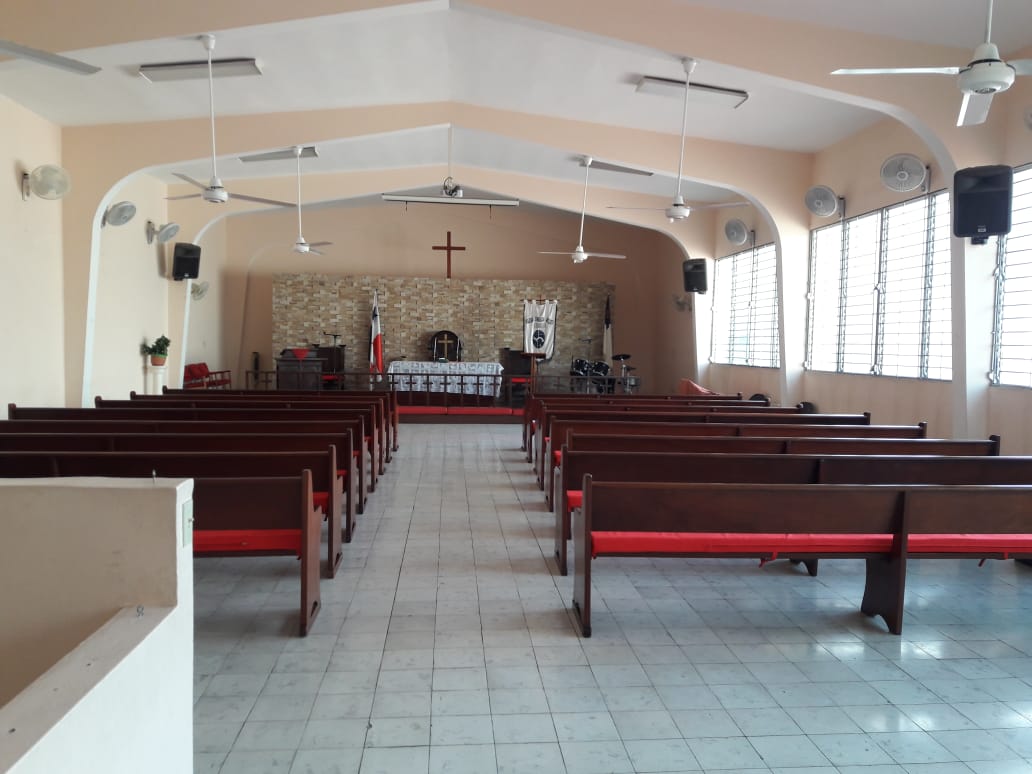 Just a few days later, Panama went into lockdown. All the planned UMVIM missions were cancelled. We were in total quarantine for three months. During that time, the level of infection in Panama remained relatively low. However, restrictions were eased slightly at the beginning of June, and people began visiting family members they had not seen in months. That was enough to light a conflagration that has not yet been brought under control.

On March 22 we held our first worship service via Whatsapp. At 11:00 a.m. on Sunday mornings we worship together as prerecorded prayers, scripture readings, hymns and a sermon are sent one at a time. Different members participate in the prayers and readings each week. On Good Friday, each of our lay preachers contributed a meditation on one of the Seven Last Words of Jesus from the Cross. On Grandparent’s Day, the children recorded special videos as a surprise for their grandparents. Later we added a fellowship time before and after services via Zoom, and now people can participate in worship through either format. 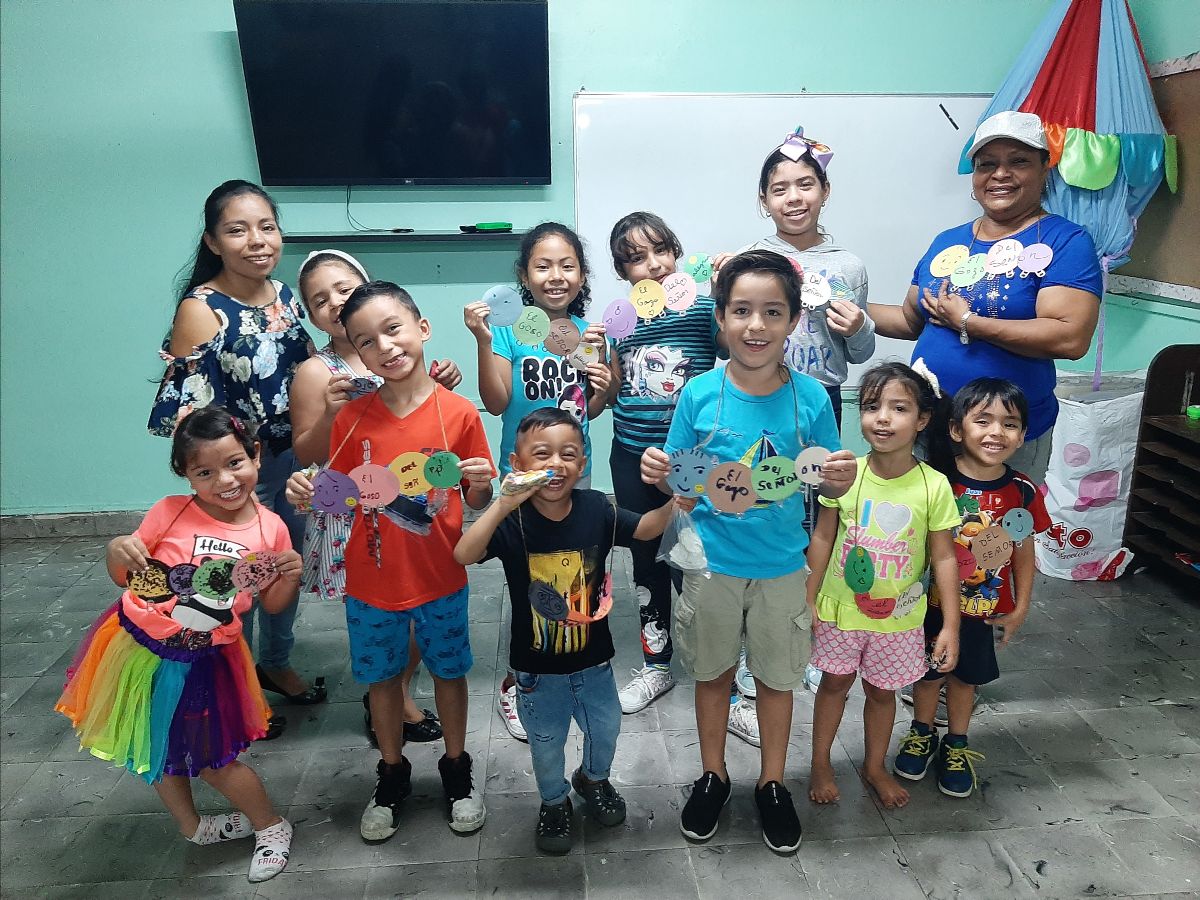 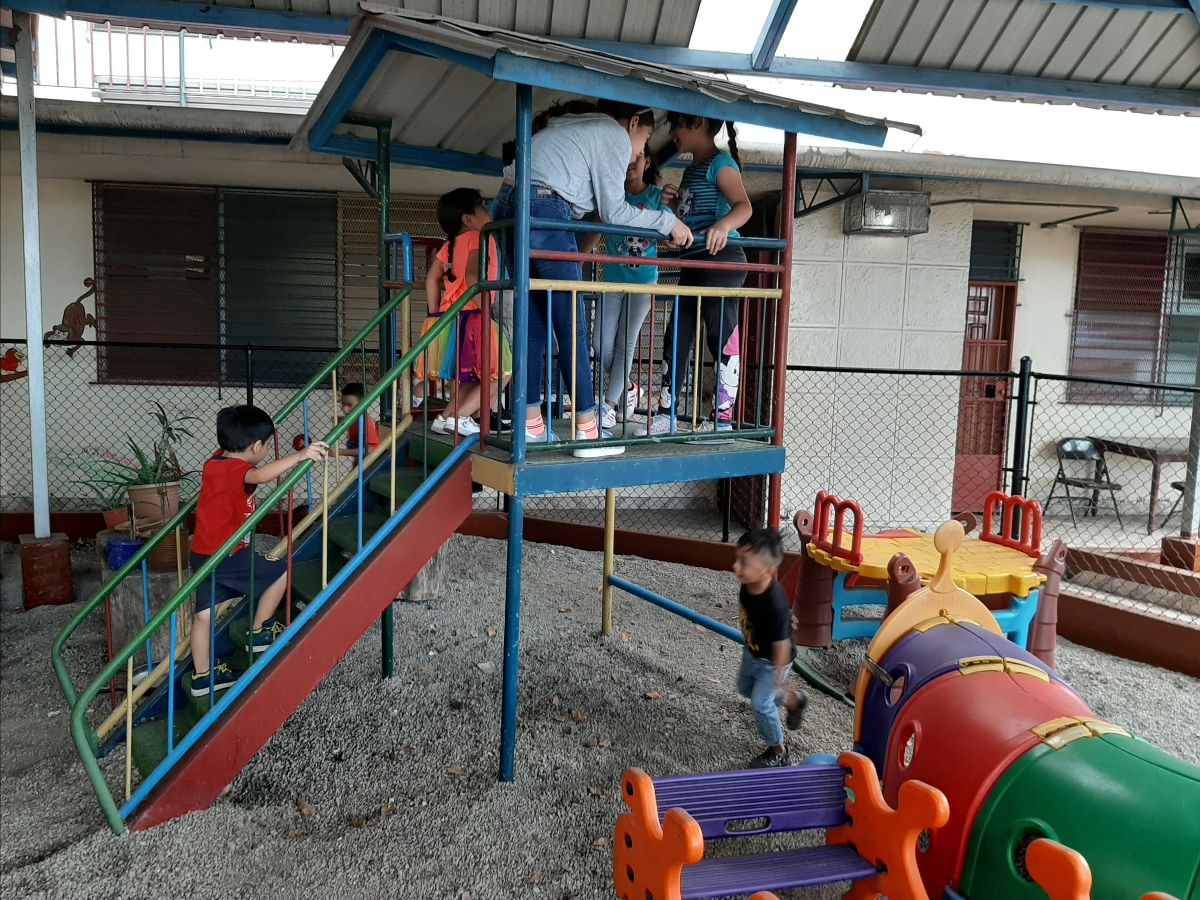 Our Children´s Ministry before and after the Pandemic hit. 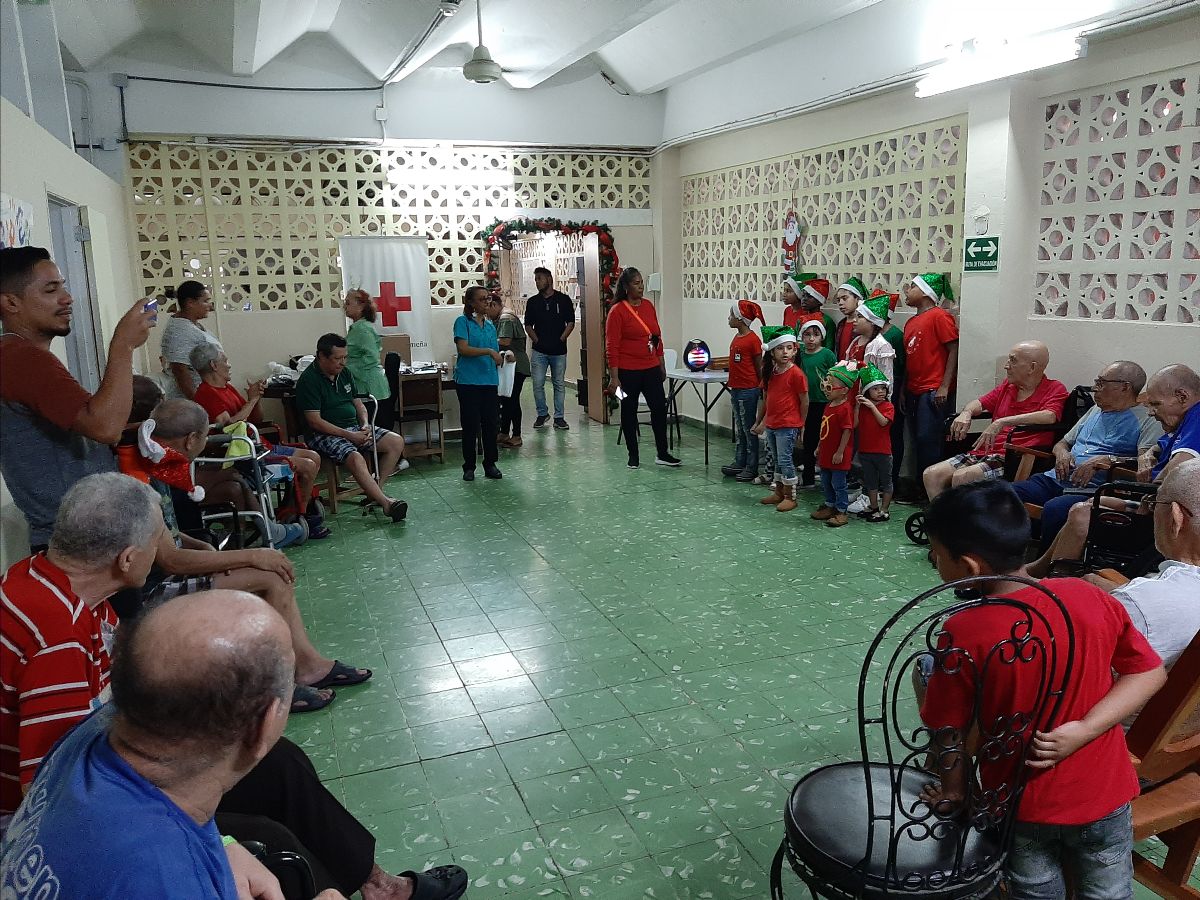 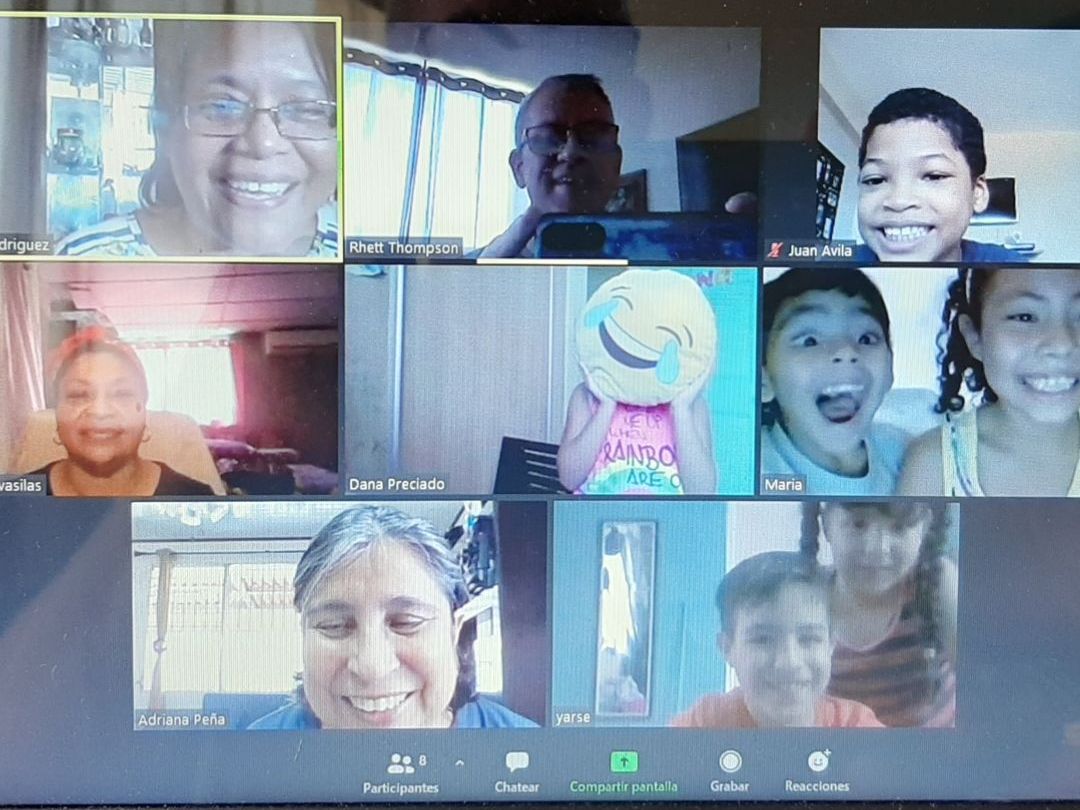 We use Zoom for Adult Sunday School, Bible Studies, as well as our Saturday Children's Ministry. Little Gabriela recently asked her grandmother if the Children’s Ministry was going to have a session even though that Saturday was a national holiday. When grandmother said probably not, Gaby responded, “Tell the Pastor that a national holiday is no excuse to cancel the children’s meeting.” So, we decided we had better not cancel. That meeting was one of our best yet. 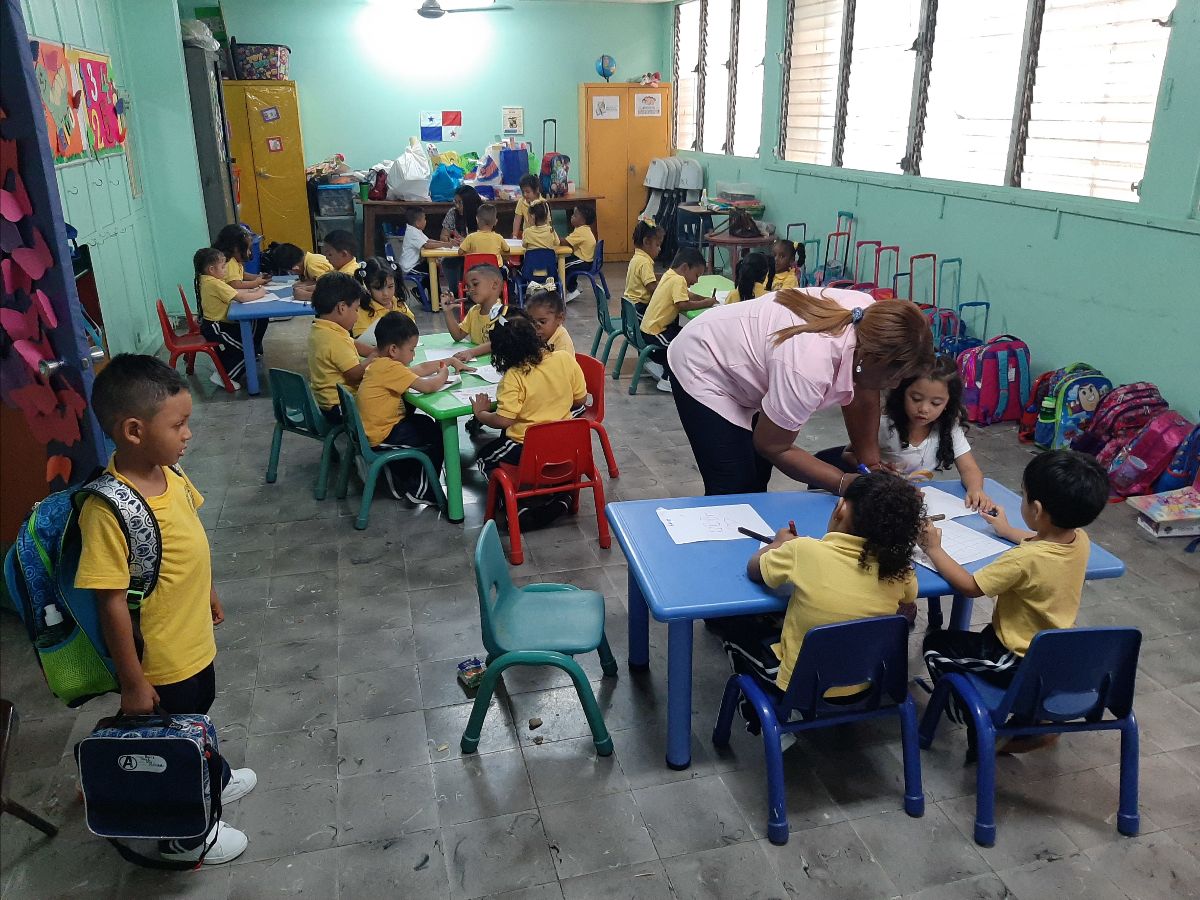 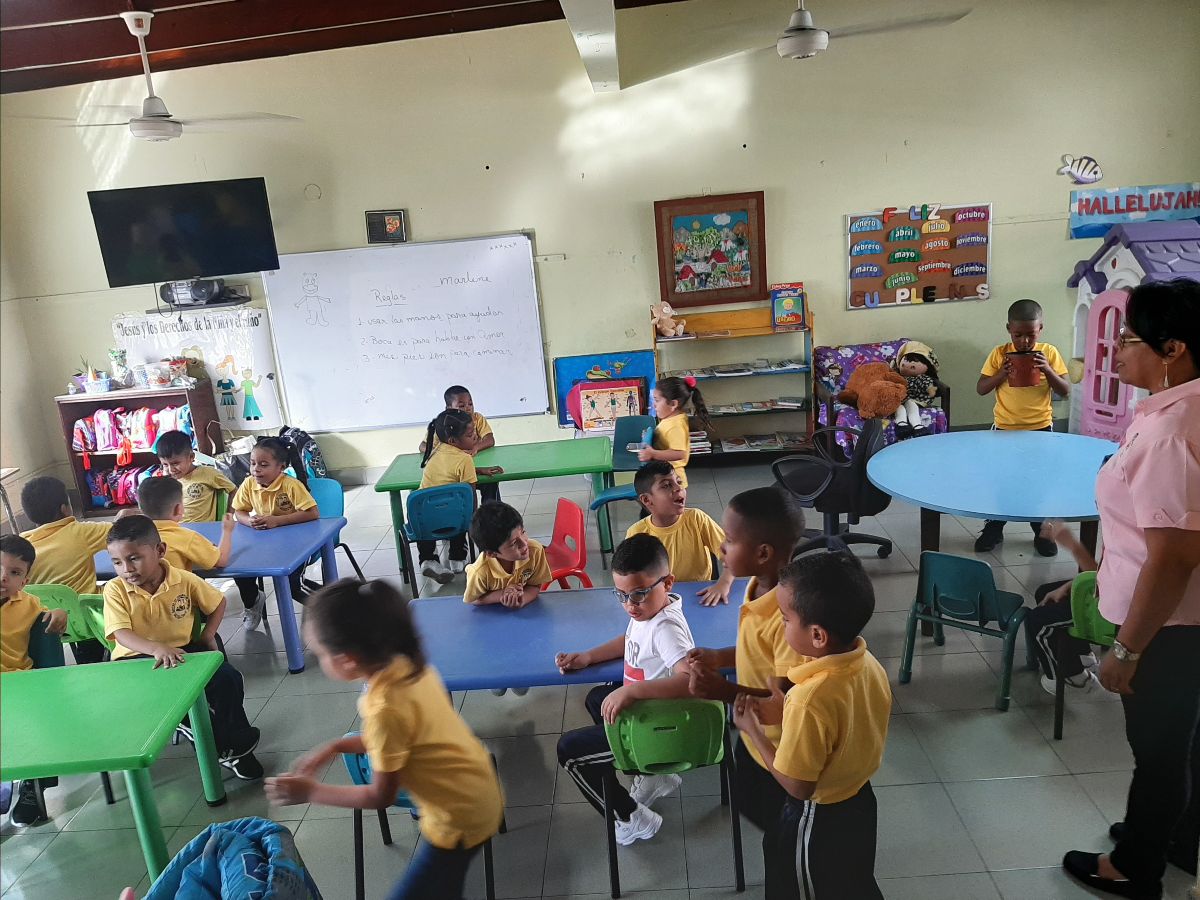 Our Child Development Center was in the first week of classes when the Pandemic hit and had to be completely reinvented. Two Zoom sessions are held with each age group every week. The teacher also does a one-on-one video call with each child once a week. That enables her to monitor progress, detect problems and orient each child and parent. The children have adapted remarkably well. No schools, public or private, have been allowed to resume onsite learning. 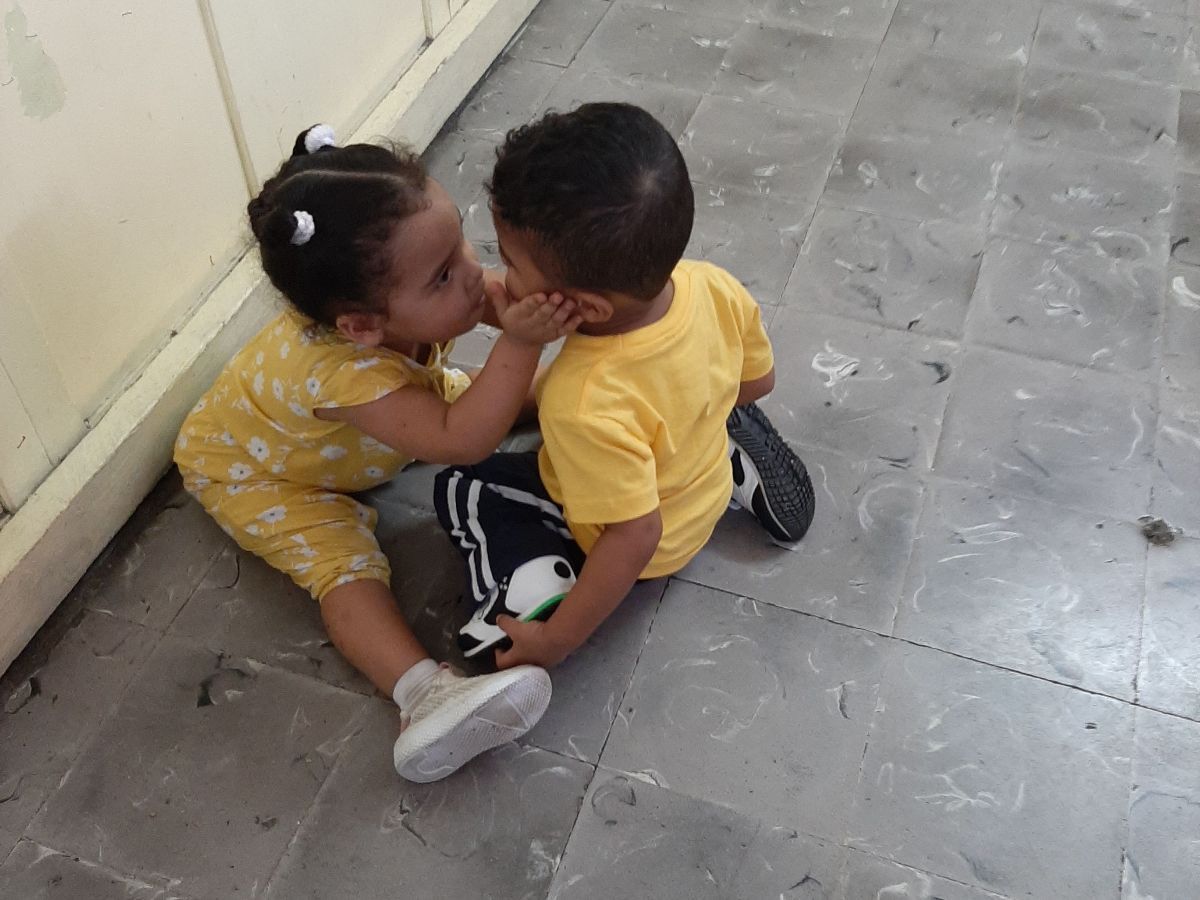 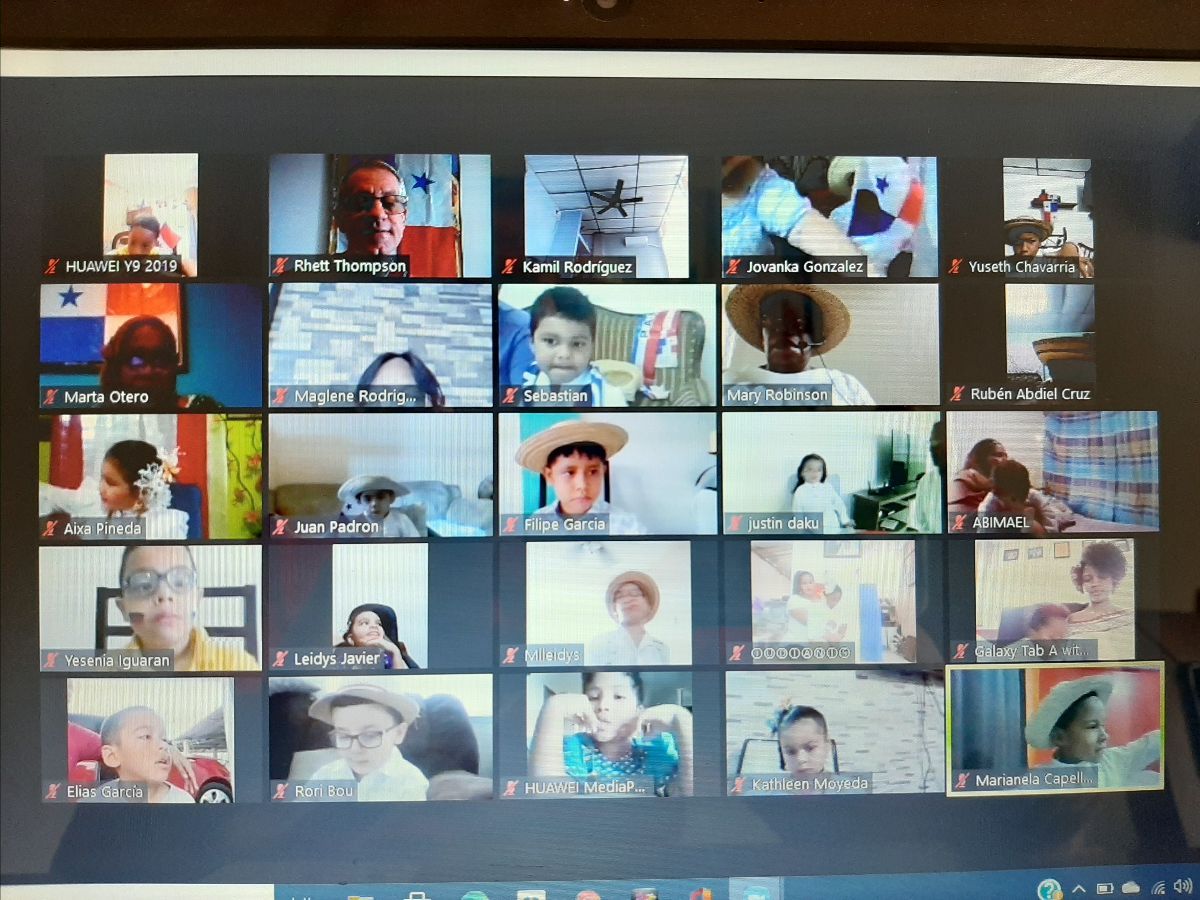 Our Youth Outreach Center also had to adapt to circumstances. On several occasions Center coordinator Enrique Clark organized distribution of groceries to families in the neighborhood. He also acquired and donated several laptops to students so that they could continue their studies. The Center has offered numerous online seminars and workshops including a seminar entitled “Understanding my Emotions in the midst of the Pandemic” and a Youth Empowerment workshop that helped participants learn how to organize a micro-enterprise. Enrique also participated in training sessions on Sexual Violence Against Children and Youth and on Preventing Youth Suicide. He and I are both participating in a course on Ministry to the Emerging Generation. 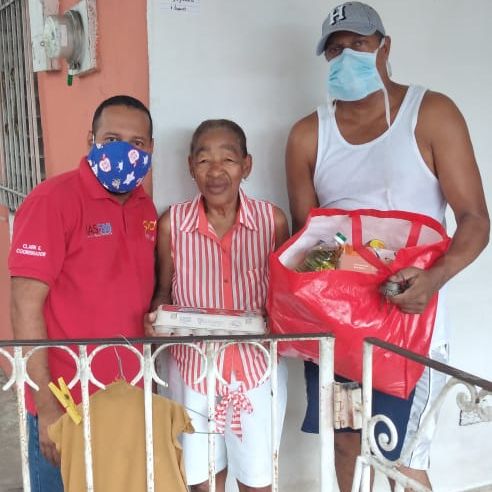 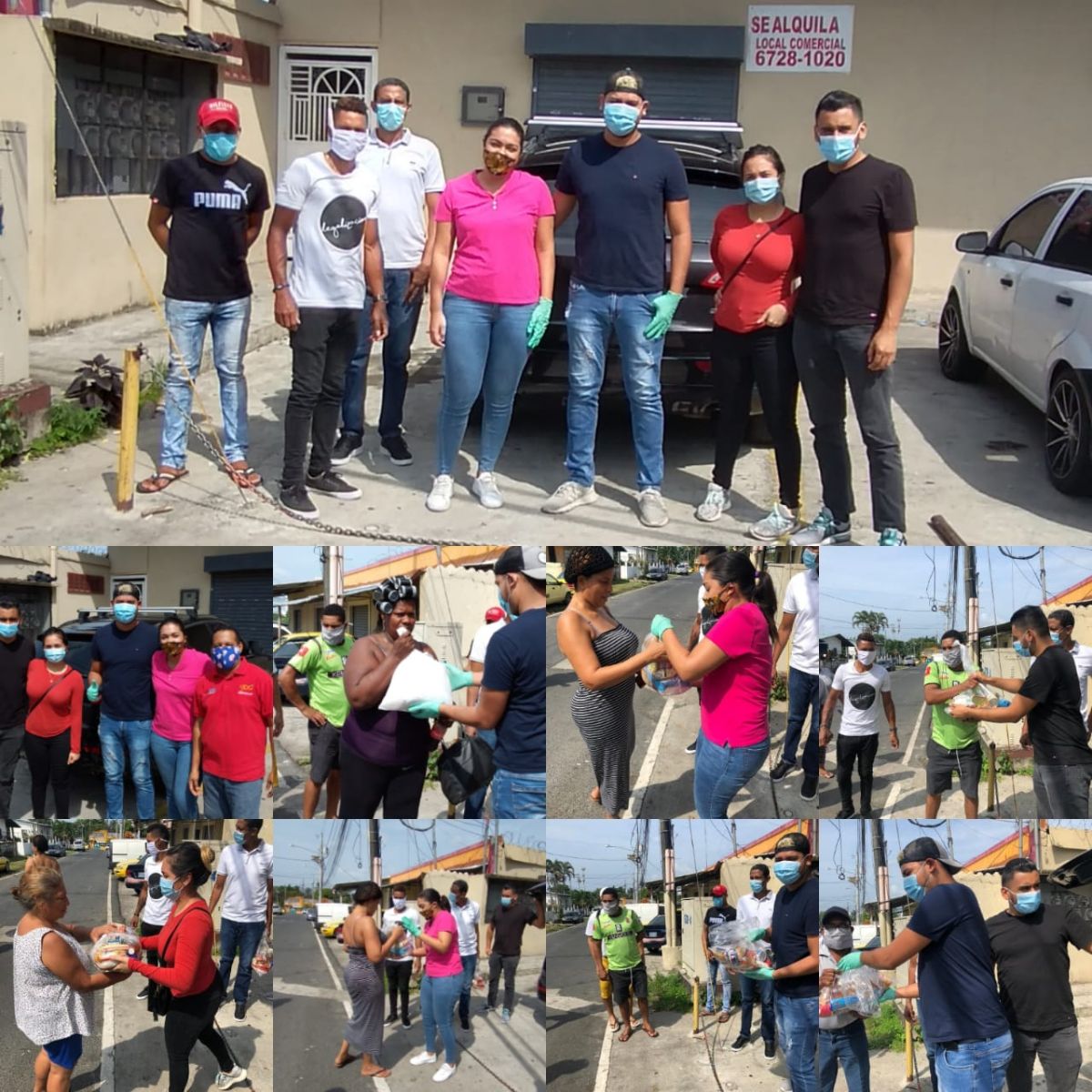 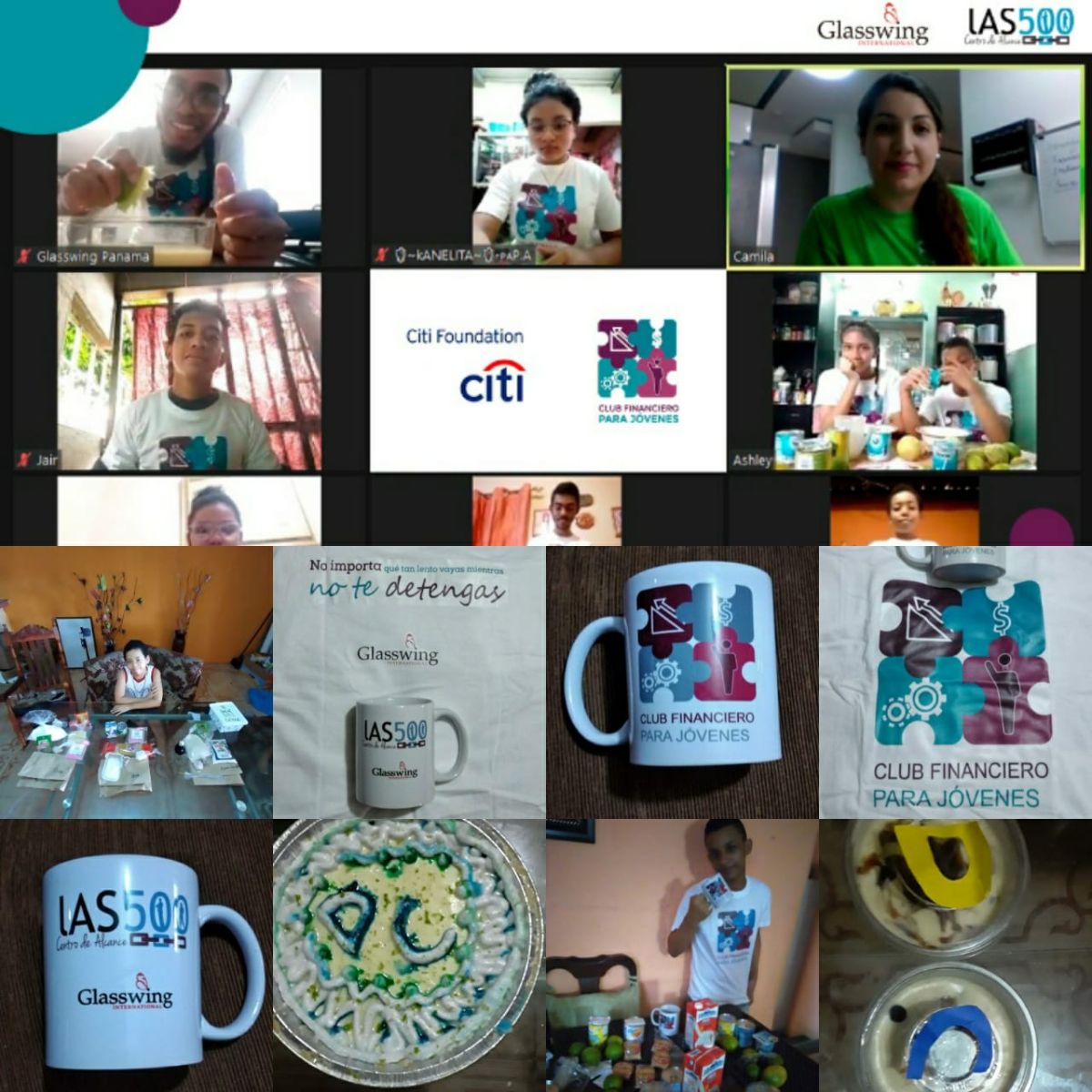 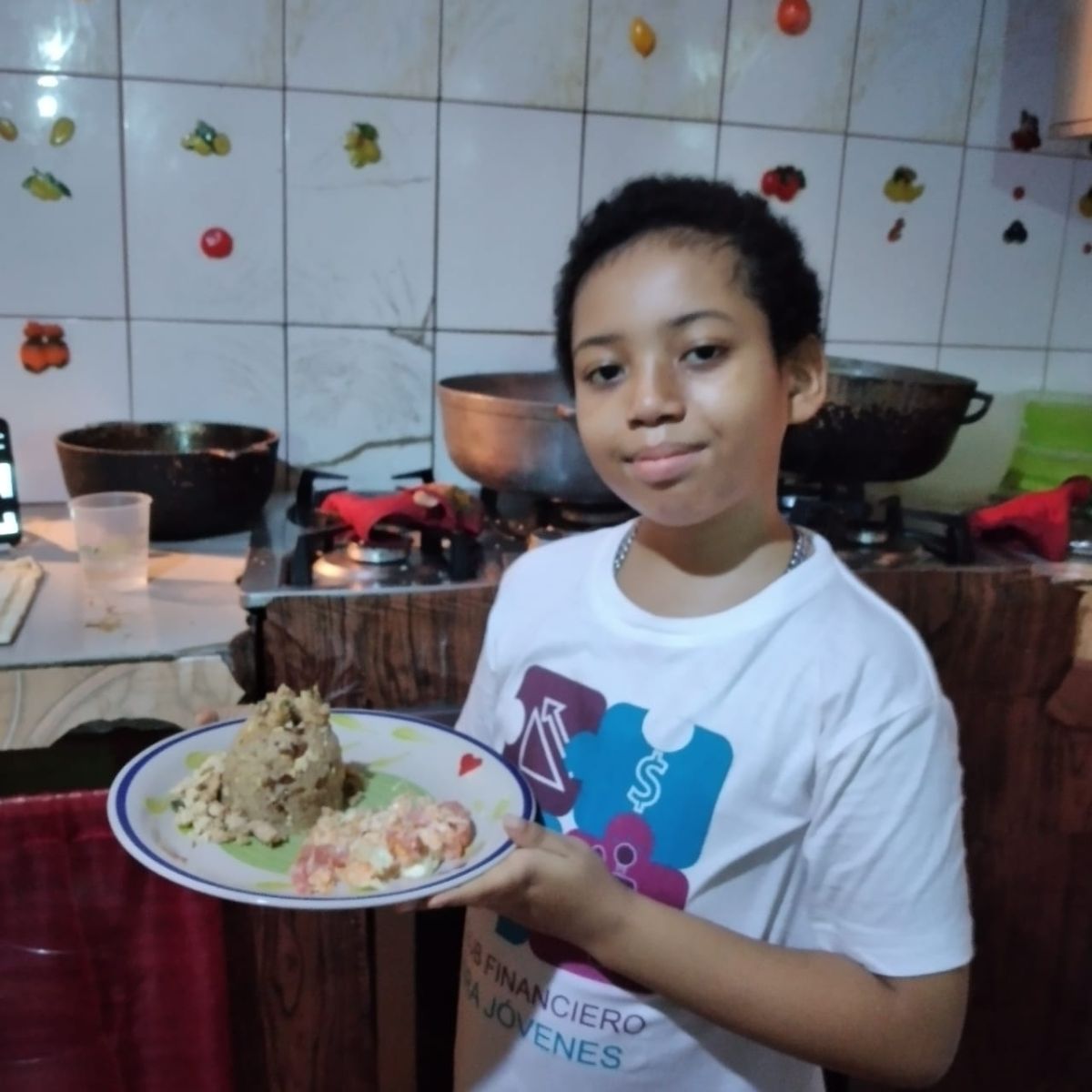 Community Center Coordinator Paula Rodríguez and the folks in Cienaguita are doing well. Both of her parents were infected by COVID and became quite ill but survived. I remain in contact with many of our Ngäbe friends. Several of our Health Promoters lost family members to COVID. Everyone wants to know when we will be back, and when the teams will return. We have not been able to resume building houses, but Paula has coordinated the Sustainable Community Agricultural Project with technicians from the Ministry of Agriculture as food production has become more important than ever. 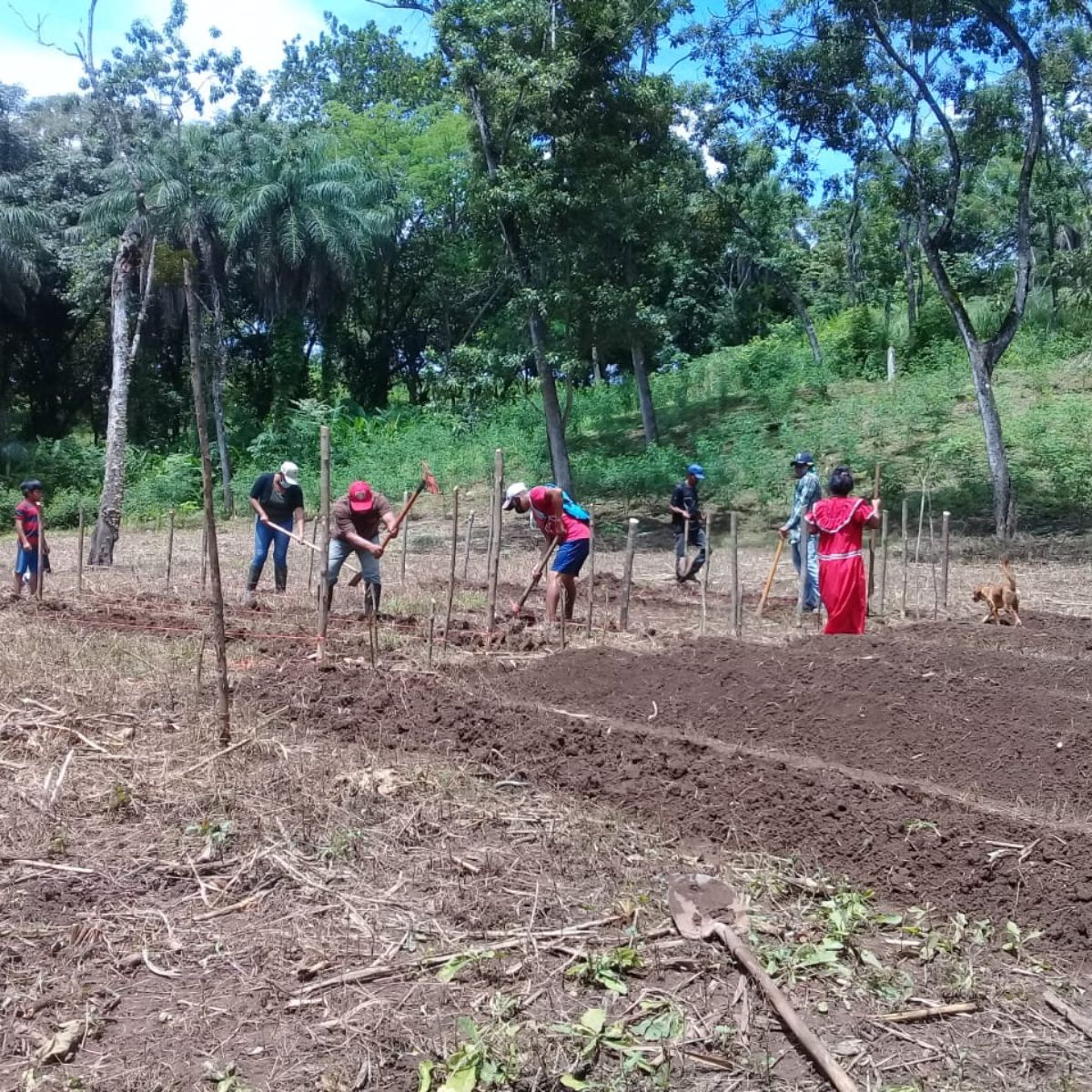 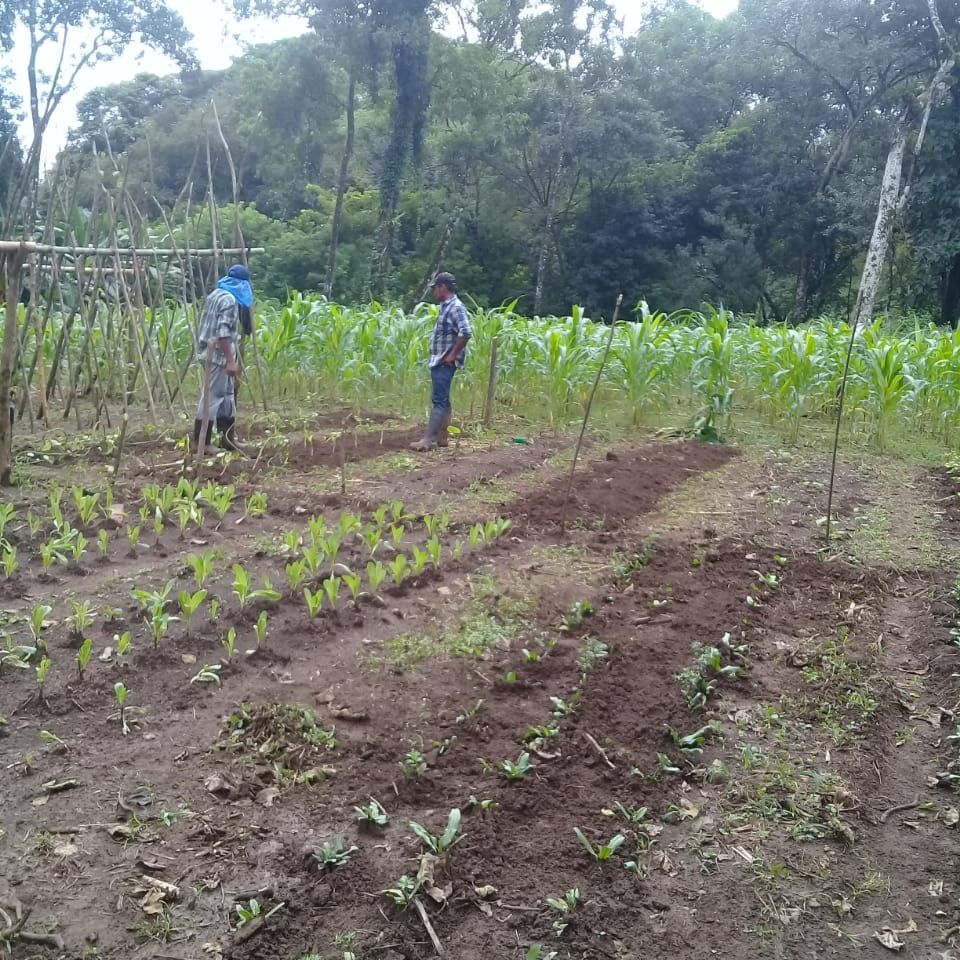 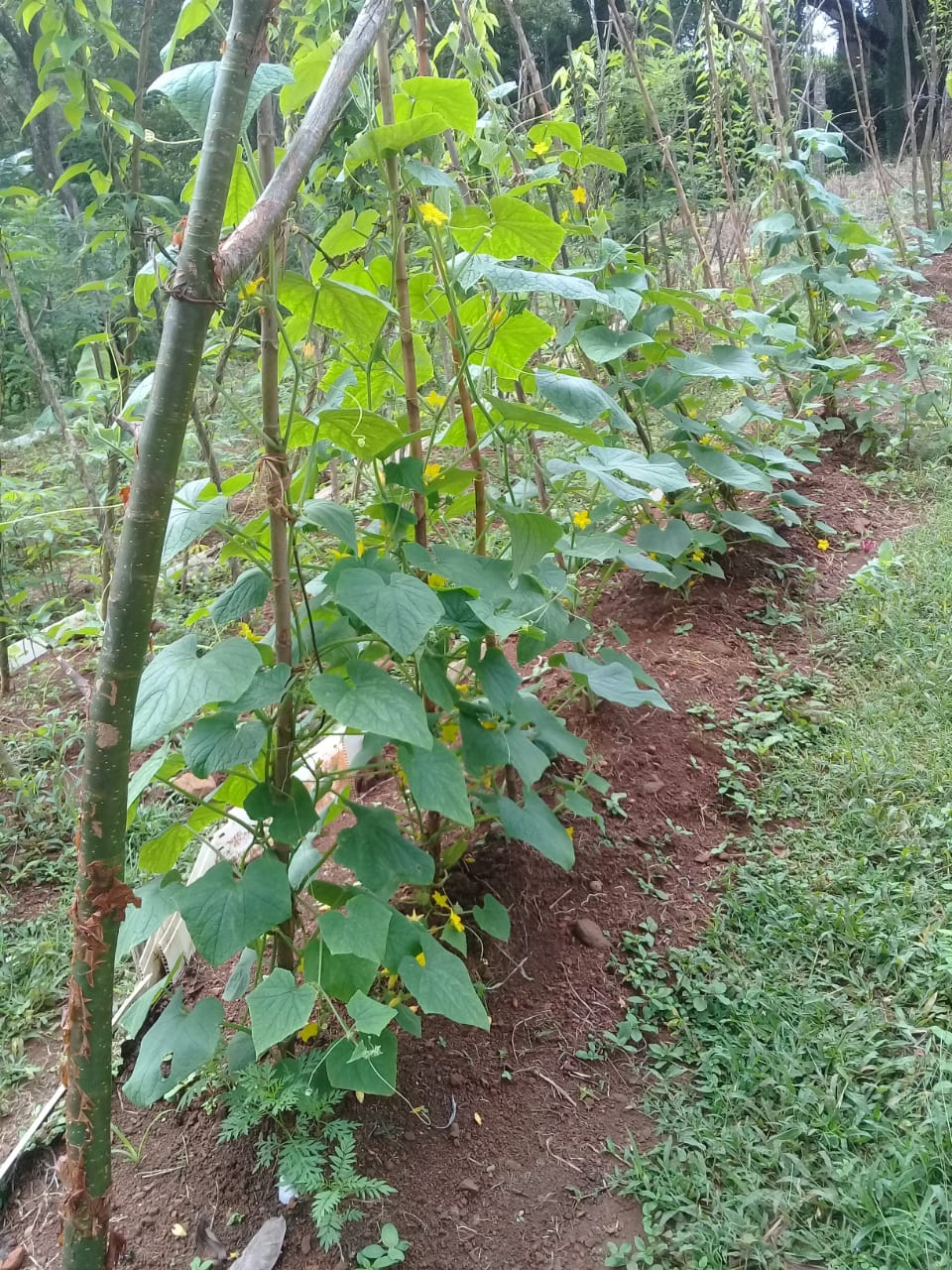 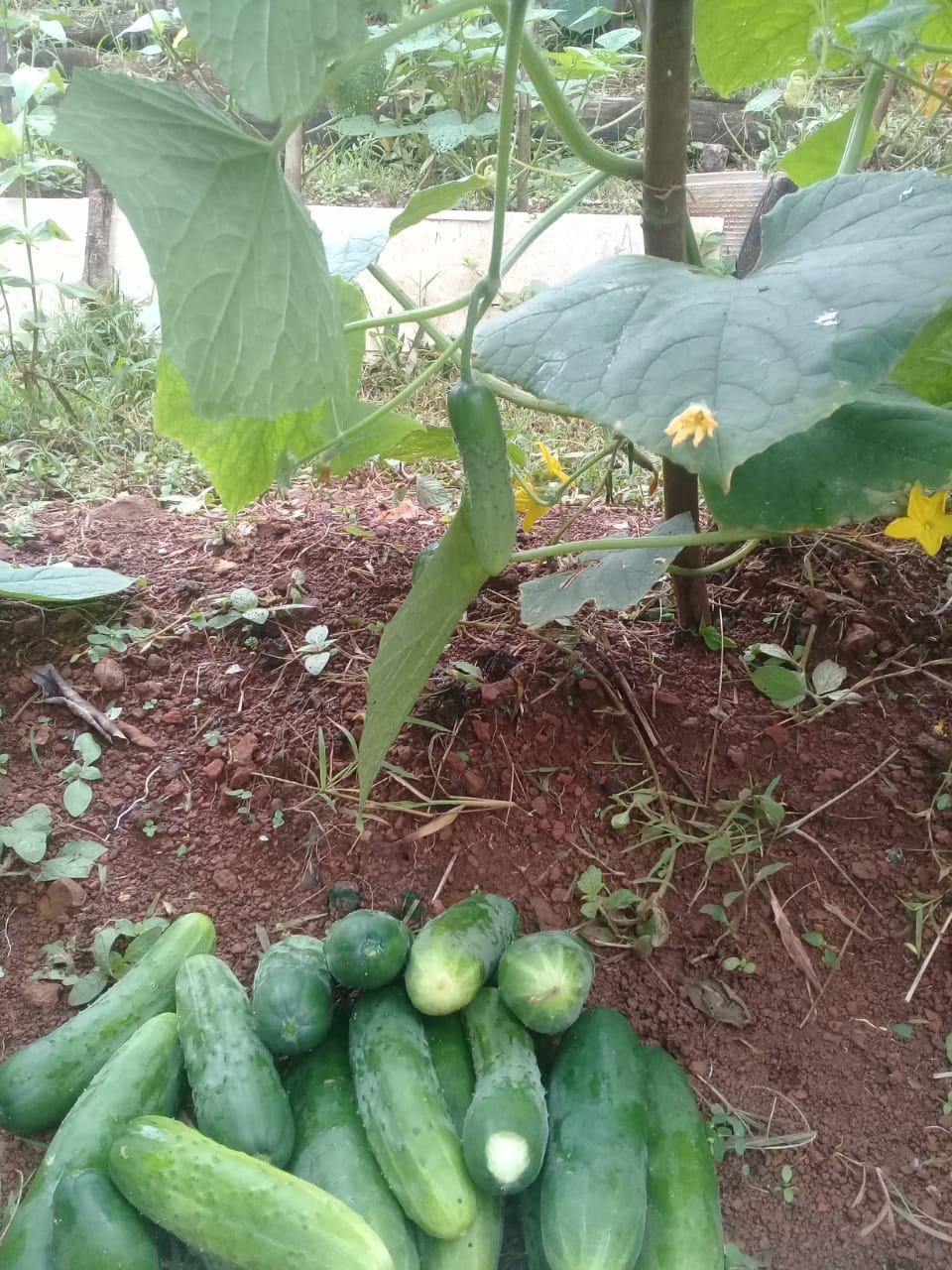 This was not the way I planned to spend my 35th year of ministry in Panama. For me lockdown meant that I was only allowed out of my apartment for 3 hours twice a week (Tuesdays and Thursdays). I worked hard with my partners in mission to figure out how to continue our various ministries. But I also spent time putting together jigsaw puzzles, reading lots of books, learning to cut my own hair, and trying out many new recipes. I also developed an exercise routine at home, combined with walks or jogs in a nearby park. Between healthier eating habits and regular exercise, I lost 30 pounds. 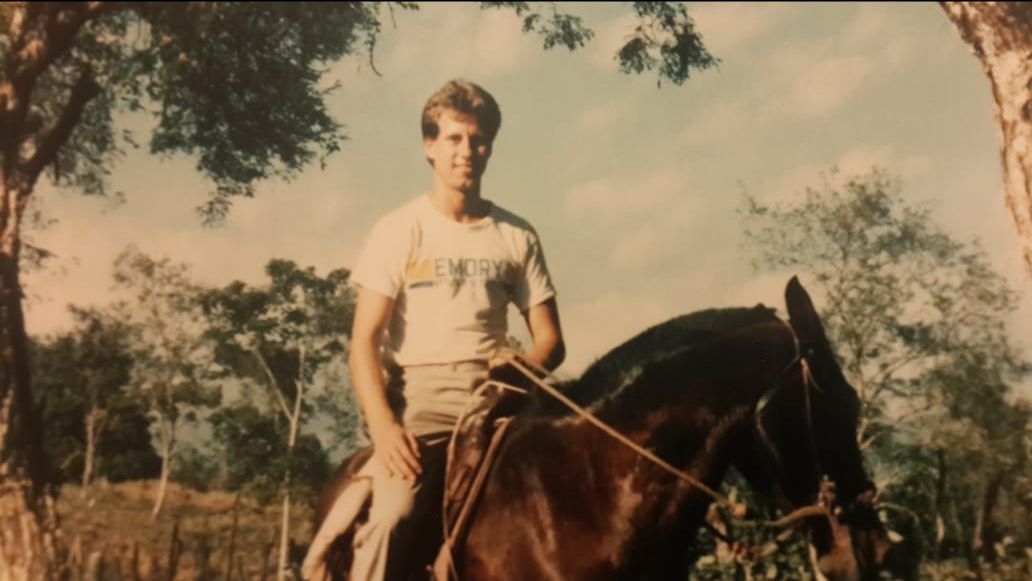 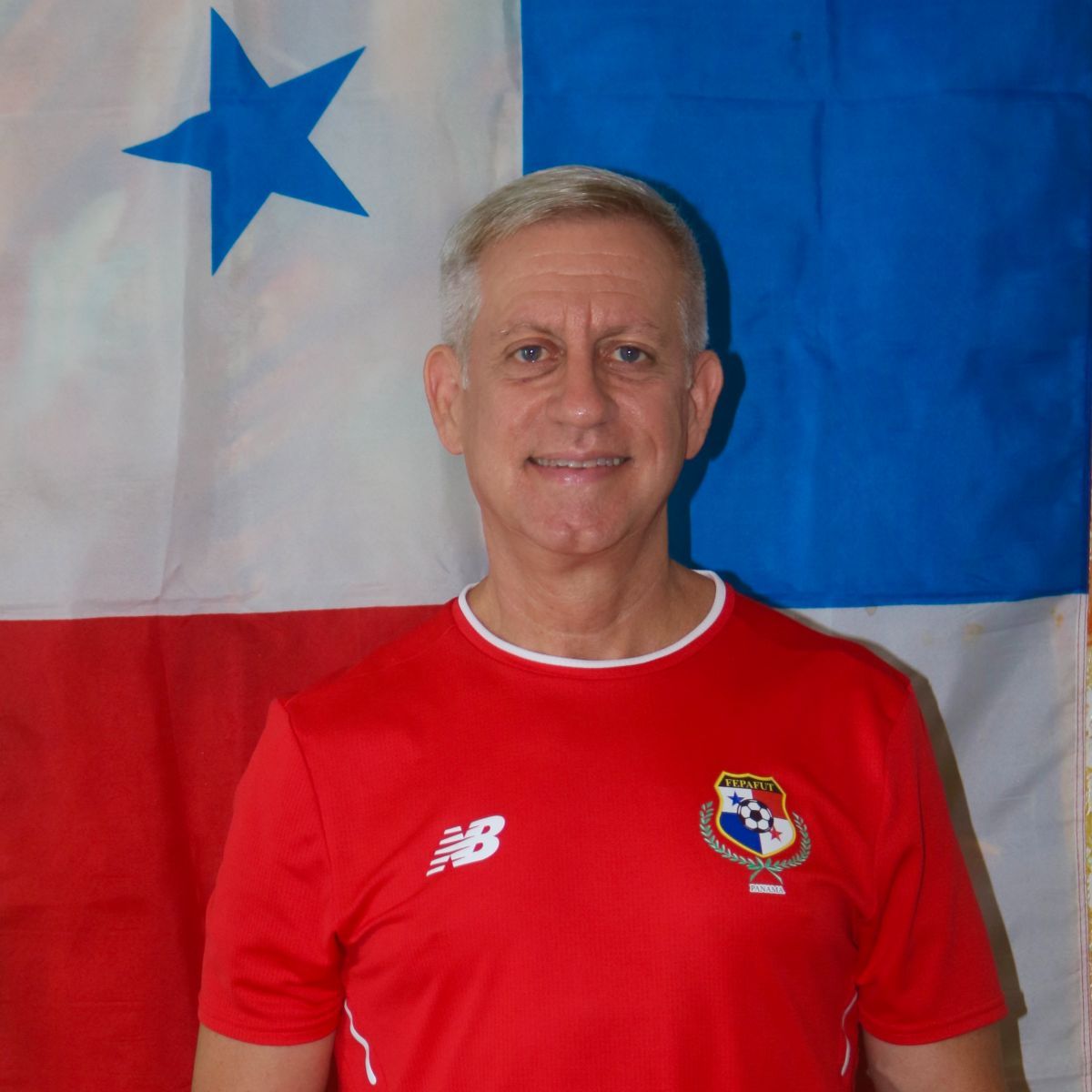 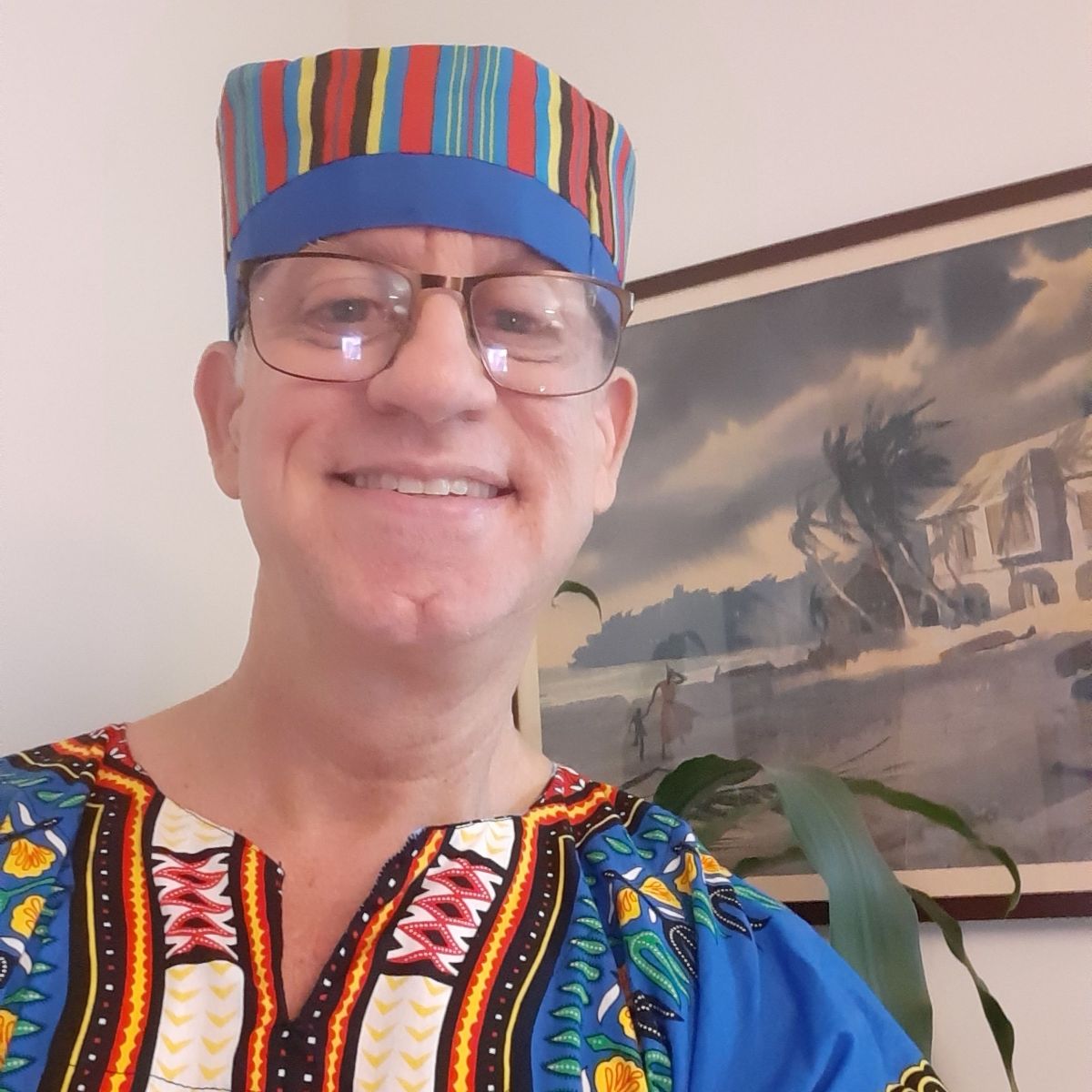 One of the lessons we have learned this year is how interconnected we all are and how much we have taken for granted the simple joy of being able to come together. So, I take this moment to say thanks to each of you for your part in this story. You may have been to Panama with a Mission Team or send financial support to this ministry or to a particular project. Or maybe you have supported us in prayer.

Like many of you, I have reached out and reached back into the past through a phone call or an email. One such call was to Louise Thrift, a special Sunday School teacher at Bright Star UMC where I worked as youth minister while in seminary. She was delighted to hear from me, but I was awed to learn that ever since she heard that I had “gone off to Panama” as a missionary pastor, she had been praying for me and for the people of Panama. Every day. Since 1985.

Panama is still in the grips of the pandemic. Last Friday we had our first service in the church since the beginning of the pandemic. But it was a funeral. Another loss to COVID. As we enter the Lenten season, we mourn this and other losses. We have walked the Via Crucis. We have walked through the valley of the shadow of death. But death does not have the final word. We serve a Risen Lord. So we look to the future with hope to renew many ministries that have been on hold, to continue to share the love of God and work for that abundant life that is God's will for all.