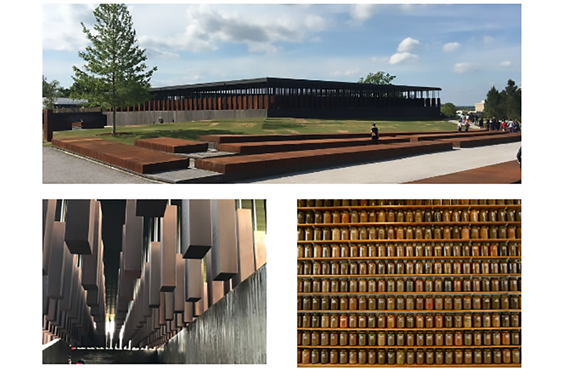 The 2019 North Alabama Annual Conference passed a resolution entitled "Resolution for Pilgrimage to the National Memorial for Peace and Justice."

This action of the Annual Conference calls upon North Alabama United Methodists to take the following steps:

Read full text here: Resolution for Pilgrimage to the National Memorial for Peace and Justice

To help your congregation, begin living out this resolution, below is information about pilgrimage, the National Memorial for Peace and Justice and the Legacy Museum and some suggested resources to prepare your congregation for making a pilgrimage to the Memorial and Museum.

The ancient spiritual practice of pilgrimage is about physically getting out of our usual space so we can be spiritually transformed. Christians often make pilgrimage to the Holy Land. The resolution the North Alabama Annual Conference passed on June 4 is about a different kind of pilgrimage: a journey to the National Memorial for Peace and Justice and the Legacy Museum.

The Methodist church split over slavery in 1844, and rejoined in 1939. The church remained formally segregated until the Central Jurisdiction ended in 1968. But the full truth of our history has seldom been told, and many people do not know about the 4000 racial terror lynchings which enforced segregation and Jim Crow for over a century.

The opening of the Memorial and Museum is an opportunity for Methodists in Alabama to better understand this history and its continuing influence on our understanding of racial justice and our church today.

The National Memorial for Peace and Justice and the Legacy Museum

The Memorial and Museum opened in Montgomery just last year. The Museum is in a building which warehoused slaves before they were auctioned. Tens of thousands of slaves passed through the area before being sold into servitude.

Many churches have already taken groups to visit the Museum and Memorial. Visitors often say that it is a spiritual and emotional experience, that it is transformational and deepens their understanding of history and of themselves.

The Half Has Never Been Told, by Edward E. Baptist
Just Mercy, by Bryan Stevenson
The New Jim Crow, by Michelle Alexander
The Cross and the Lynching Tree, by James Cone
White Fragility, by Robin DiAngelo
Discover, Develop and Deploy Spiritual Leaders to Make Disciples of Jesus Christ for the Transformation of the World.