Restaurants hold “It Takes a Village” drive and raise more than $17,000 for UMCOR 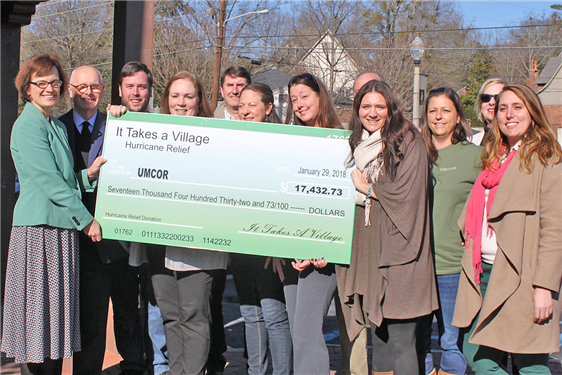 This fall as hurricanes devastated various parts of the U.S., restaurants in Mountain Brook, a suburb of Birmingham, joined together to raise funds for hurricane relief. Operating under the name of "It Takes A Village," reflecting Mountain Brook’s layout around several villages, each establishment offered various specials and donated a portion of their proceeds for an entire week. Together they raised more than $17,000.

The group was organized by Leah Harrigan of La Paz Restaurant. Harrigan is a member of Leeds First UMC. She knew the participants’ main desire was for the funds raised to go “directly to help the people” affected the storms. She suggested the funds be directed to the United Methodist Committee on Relief (UMCOR) because she knew every dollar would go to recovery efforts and that UMCOR would be there helping to rebuild lives for the long haul. Other participants agreed.

"It was amazing," Harrigan said. "When we went to the owners asking them to contribute, they were on board immediately."

UMCOR is able to direct 100 percent of designated contributions for a particular program or disaster response and none of it gets funneled back into fundraising or operating costs. This is because UMCOR’s administrative costs are covered by separate giving by United Methodist congregations and individuals to the annual UMCOR Sunday (formerly One Great Hour of Sharing) special offering and other undesignated gifts. This year UMCOR Sunday will be March 11, 2018.

Restaurants hold “It Takes a Village” drive and raise more than $17,000 for UMCOR