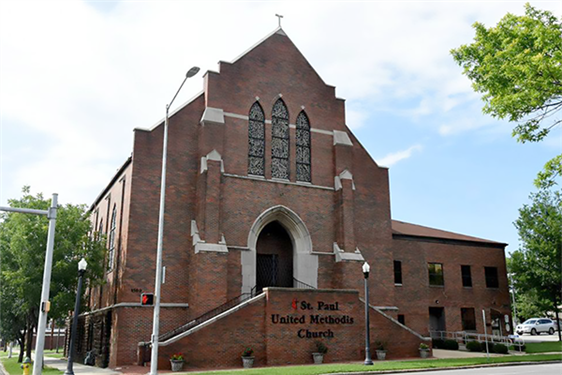 The National Park Service has issued a $500,000 History of Equal Rights (HERS) grant to St. Paul United Methodist Church in downtown Birmingham (Central District). The grant is for the preservation and repair of this historic church structure. Additionally, St Paul UMC has received a $500,000 African American Civil Rights Grant from the National Parks Service as a continuation of its preservation efforts for the church building.

The objective of the HERS grants, funded by Historic Preservation Funds and administered by the National Park Service, is to help complete projects that assist in the preservation of a site related to the struggle of all Americans to gain equal rights. The African American Civil Rights Grant program specifically focuses on helping to preserve African American civil rights history.

These grants are a continuation of the fundraising efforts by St. Paul, “to repair and preserve the church building to be available as a place to tell the story of the Civil Rights movement here in Alabama and the United States,” says church trustee Henry Coleman, a leader on the History and Construction Preservation teams.

St. Paul was the first church in Birmingham to hold mass meetings following the success of the Montgomery bus boycott. It also played a pivotal role in the training of young children for non-violent civil disobedience against segregation laws in Alabama. Rev. Joseph Lowery, a co-founder along with Dr. Martin Luther King Jr., of the Southern Christian Leadership Conference (SCLC), was one of the pastors during the critical years of the Civil Rights movement. He also managed to complete the construction of the church's sanctuary.