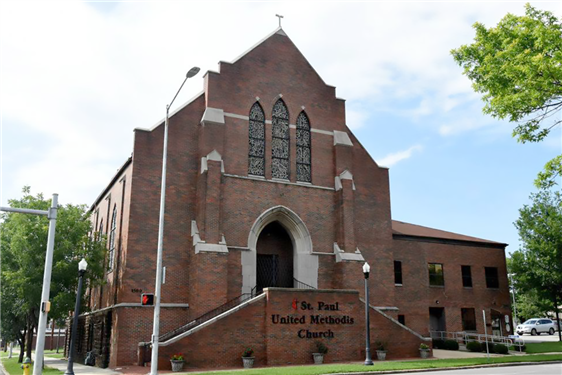 The National Parks Grant funds awarded will be used to preserve and restore St. Paul’s historic church building as a part of the National Monument created by an Executive Order signed by President Barack Obama.

In 1956, during the pastorate of Rev. Otis R. Flournoy Sr., St. Paul was the first church in Birmingham to hold a mass meeting of the Alabama Christian Movement for Human Rights (ACMHR) which had been formed by Rev. Fred L. Shuttlesworth and other local leaders. This was the first major direct-action campaign effort to integrate Birmingham’s buses after the United States Supreme Court actions regarding the Rosa Parks case. The Montgomery Bus Boycott victory resulted in the desegregation of the Montgomery bus system and public accommodations.

At the time, there were state laws passed to break up organizing efforts of existing organizations opposing segregation. The activities of ACMHR merged with the Southern Christian Leadership Conference (SCLC) founded by Dr. Martin Luther King, Jr., Dr. Joseph Lowery and Rev. Fred Shuttlesworth. When there were major threats to the lives and livelihoods of those who participated in civil disobedience to segregation laws, a strategy of involving young people was launched. St. Paul Methodist Church was one of the churches central to training young people in non-violent civil activism.

On April 7, 1963, St. Paul Methodist and 16th Street Baptist Church were among the departure points for the Palm Sunday March by children to City Hall to protest segregation led by Rev. N.H. Smith, Rev. A.D. King (Dr. Martin Luther King Jr.’s brother) and Rev. John T. Porter. These marches resulted in children being terrorized by police dogs and fire hoses and arrested under the direction of Birmingham Commissioner of Public Safety “Bull” Connor. Children spent time in makeshift jails until their release. News reporters’ pictures revealing how children were being terrorized for standing up for human rights were broadcast by national and international news outlets and shocked the conscience of America and the world.

Later that year, on September 15, 1963, four young girls were in the basement of 16th Street Baptist Church preparing to sing in the choir when they were killed by a bomb set by members of the United Klans of America, a local Ku Klux Klan organization. Many members of 16th Street Baptist were wounded. The bombing also violently shook St. Paul Methodist as young children participated in Sunday School assembly in the basement. St. Paul members carefully brought children out of the church one by one for fear that Klansmen were still in the area.

In 1964, Dr. Joseph Lowery was appointed pastor of St. Paul. He had worked for many years with Dr. King on desegregation in Alabama. He was active in many civil rights protests including the Montgomery Bus Boycott, the Selma to Montgomery March and the March on Washington. Dr. Lowery married Evelyn Gibson Lowery. Her father, Dr. Harry B. Gibson Sr., was also a Methodist pastor and built the St. Paul sanctuary in 1948-1951. Dr. Lowery completed the construction of the sanctuary during his pastorate.