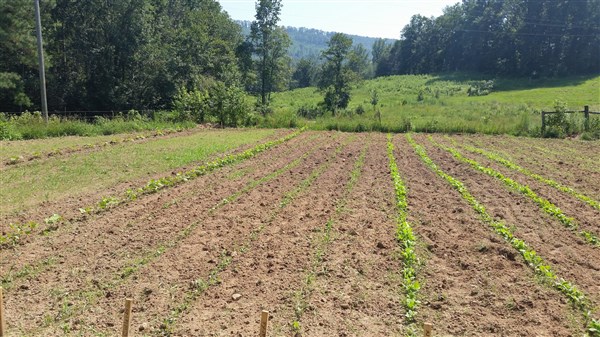 In June, members of the Board of Ordained Ministry Operational Team birthed an idea. The idea was a volunteer resourced garden to grow food for the Sumatanga kitchen staff to prepare and serve to guests and staff. That idea has developed into the Sumatanga Farm to Table Project. The project is now underway and volunteers are invited to be a part of this exciting venture.

Rev. Hughey Reynolds, senior pastor of Decatur First UMC and a member of the Board of Ordained Ministry Operational Team, shares the story of the beginnings of this project in the following blog post:

This is a personal story, a testimony if you will, to tell you why I want us to farm at Camp Sumatanga and how the Sumatanga Farm to Table Project was born. Ron Schultz had gathered his Board of Ministry Operational Team. It was late June, 2017. A couple of team members were moving to new churches and a couple were sick, so there were only four of us present that day. Ron was leading us in a devotional reflection on the Gospel reading for that week, Matthew 10:24-39. He projected Eugene Peterson’s translation of the passage on the screen. The first few lines gripped me:

24-25 A student doesn’t get a better desk than her teacher. A laborer doesn’t make more money than his boss. Be content—pleased, even—when you, my students, my harvest hands, get the same treatment I get. If they call me, the Master, ‘Dungface,’ what can the workers expect?

26-27 Do not be intimidated. Eventually everything is going to be in the open, and everyone will know how things really are. So don’t hesitate to go public now:

28 Don’t be bluffed into silence by the threats of bullies. There’s nothing they can do to your soul, your core being. Save your fear for God, who holds your entire life—body and soul—in his hands.

Ron asked, “What in these words stands out for you?” For me it was “Dungface,” “Do not be intimidated,” and “Don’t be bluffed into silence by the threats of bullies.” I have seldom, if ever, considered myself one whom others call names, intimidate, bluff into silence,” or bully. After all, I was a pretty good linebacker back in the day and am in relatively pretty good physical shape now for someone about to turn 62. Maybe the “Dung” reference triggered a category in my memory where I have been intimidated and bluffed into silence. I’m talking about my love of and passion for farming.

Last fall I attended the 3rd annual “Redeeming the Dirt” Conference held in Gadsden, Alabama. Joel Salitan was the keynote speaker. Joel is the co-founder with his wife of Polyface Farms in Virginia. He’s written several books about his commitment to agrarian principles in farming, as opposed to industrial agricultural principles. They include You Can Farm; Folks, This Ain’t Normal; and the Marvelous Pigness of Pigs. Hundreds of young and not so young Christian farmers had come to hear him. In one of his talks, Joel Salitan shared that he had spoken to groups of environmentalists and even to students at UC Berkeley and testified before government panels about farming methods and policies that work with nature rather destroying the earth. These were secular audiences, but only in recent years had he “come out of the closet as an evangelical Christian.” I was leading a breakout group afterwards and shared that my story was the mirror opposite to Joel’s. I’ve been preaching the Gospel and serving churches since I was 17 years old, but only recently have I come out of he closet as a farmer.

Actually, I began to slowly come out of the closet as a farmer three appointments ago in the late 1990s. I was close enough to my family farm at that time to spend my days off there and to develop its pastures and fields and work the cattle. In the next appointment, the church and I started a Community Garden, in the next a Farmers Market, and in my current appointment the church and I have developed a thriving Community Garden. I also serve on the local farmers market board of directors. In every one of these appointments there were those who cheered on my agricultural activities, some who saw them as a nice diversion from the work of ministry, and some who saw them as an unrelated distraction from ministry. Both church members and ministry colleagues–who know me well or from a distance–have held one or the other of those views.

A few colleagues and church members have helped me bale and haul hay, build fences, and castrate bull calves. Yep. All that was an education and maybe even some good sermon material for the preachers. A few have winked and written it off as a personality quirk. And a few are described by the passage in Matthew 10 above, and have resorted to professional, intellectual, religious, and vocational intimidation and bullying. “Leave the farming to the experts and stick to preaching.”Well, emboldened by Jesus’ instructions to his disciples, “So don’t be intimidated by all this bully talk” (verse 31), I am not backing off.

Back at our team meeting in late June, the topic turned to Camp Sumatanga and the potential for development there. Perhaps it was nearing the lunch hour and our stomachs triggered the question of why someone hasn’t used the farm Sumatanga purchased a few years back to grow food for the Sumatanga kitchen staff to prepare and serve to their guests and staff. I felt 4 sets of eyes on me that day, those of my fellow team members and God’s. And thus began the conversation. Ron told me to contact Mike Densmore, who chairs the Sumatanga Board of Directors, to see what he thought about the idea. Sheri Ferguson is on Ron’s team with me. She asked to join the conversation with Mike and me, and she did. We met at Nikki’s West on a rainy Thursday in July, and even though it was mid-afternoon we ate fried green tomatoes, collards, peas, and sweet potatoes. Over that food, through prayer, and in our conversation the idea was born to explore the development of a Sumatanga Farm to Table Project. We all went with a punch list of contacts to make. We made them, I walked the property and marked a good location for a garden with stakes, and we got a green light from the Grounds Coordinator and powers that be to pursue a volunteer resourced garden for the camp. I am all about it and excited to share this project with others for whom it also matters. Come join us.

The ground is prepared and seeds are planted

The first workday was August 5, 2017. Seven volunteers gathered to prepare the ground and plant the first plants in the fall garden. They bush hogged, raked, plowed and planted 16 or 17 rows that are 75-80 feet long.

Reynolds reports, “Two weeks and two days after we prepared the ground and planted seed, our garden at Camp Sumatanga is showing great promise. We have a stand of lettuce, turnip greens, collards, bush beans and squash. Our spinach and kale are lagging behind and may need to be replanted.”

Another workday is planned for Saturday, September 9, 2017, from 8 a.m. - 2 p.m. Everyone is invited to participate. Volunteers will weed the garden and have broccoli and other donated plants from Bonnie Plants to transplant. There will also be mushroom compost to spread around all the plants.

Anyone interested in volunteering on September 9 should email Laura Belding in the Office of Ordained Ministry at laura.belding@umcna.org to sign up. Bring your gloves and gardening tools!

For questions about the Sumatanga Farm to Table Project, please e-mail Sheri Ferguson at sheri.ferguson@umcna.org. 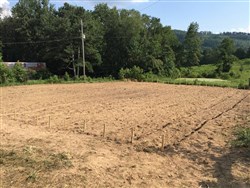